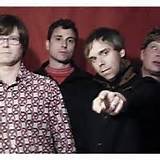 The drone is the heartbeat of all great music.

From the ancient north African musics of the Magreb to the ragas of India to the Captain Trips of great psychedelia it is the hook that pulls you in the – the very core of the music with its droning hypnosis.

Magic Shoppe know this as they deal out their classic, quintessential American reverb soaked garage rock. There is something wonderful about being in America watching this very American form being played in a tightly packed venue- it feels so natural and so much at the core of this timelss music.

Magic Shoppe are that point of time between 1966 and 1967 when the regency look went LSD, add to this a dash of the various Brit interpretations of the form, the wonkier end of post punk and the great American underground of the eighties and a 21st cetury nous and you have something really special.

Somehow this band of anglophiles also remember to flavour their music with the anglo version of the form. I can hear classic Brit trips in there as well as the late eighties Mancunian Pebbles lovers and it’s this fusion that is most fascinating.

With their classic guitars and shattered pudding bowl hair they look like a gang of friends in thrall to the mind altering form and the possibilities of distorted guitars to distort the mind. They do this with an addiction to the drone but all great melodies that are honey coated and quicksilver and also a very inteigent use of three guitars – some playing a razor sharp garage rock -a  razor sharp cheesewire guitar by … froi Subpop band Green Magnet.

With their twin girl/boy front team enganed in sun drenched classic sixties beat trip harmonies the band mesh these with their mesemrising drones. They look like they may have played in bands before and this is just for kicks but they are so good at it that they really could make some sort of impact with their excellent music.