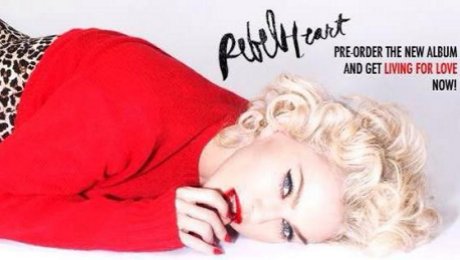 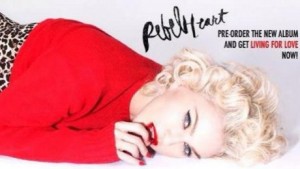 It feels like a lot more- she has been around forever- as long as we have in our various ways- a permanent  fixture for our generation and part of the pop wallpaper. Unashamed pop. Not boring smelly serious stuff but an innovative popaholic.

What is this thing called Madonna?

Where can she turn now.

The initial reports were not so good. The album went off to a shaky start- leaked on the net and the first track dive bombing on iTunes but it is, perhaps, almost her greatest work with moments of sheer pop genius and killer grooves.

And it took that stumble at the Brits to wake everyone up.

Suddenly in thirty seconds Madonna went from veteran pop star with a 13th album to flog at the tail end of her career to front page fodder and the hottest news on the block with THAT FALL. And the album backs this up. the cover hints at sado masochism and the the schizo album does naval gazing and raunchy sex back to back.

The Brits appearance went from disaster to triumph in one giddy onstage trip and capegate may be the saviour of a career that was starting to f-f-f-fade. Or was the fact that everyone wanted to be Madonna so badly that the real Queen of Pop was now having to play catch up?

Good job that she is the most self aware pop star ever. Instead of skulking in a corner her new album like the thirty seconds after capegate sees her dusting herself down and coming back fighting with a  collection of songs that nearly always sets the pace instead of following and like all great pop stars from the Beatles to Bowie she has that knack of taking from the cutting edge and making it her own and placing it into the mainstream on a record that combines the very remote edges of the modern dance with the madness of Atari Teenage Riot and the big plonky pop ballads of Elton John…schizophrenic? – yes!

Unlike the Daily Mail we have no problem with her flaunting her fleshiness  at 56- infact that’s a cool thing. If nothing, pop is about breaking conventions and if people want to sell sex at any age then that’s cool with us. Even if its celebrating the matador – that cruelest of sports – her new look has the concrete cool of someone who is plugged to the haywire livewire of the fashion world. It’s a theme that carries her 13th album that has had an awkward start to life being after being leaked all over the internet and roundly ignored in the iTunes presales. It seemsed like even Madonna was going to have a late career  flop album with even radio ignoring her and would have to rely on greatest hits and fleshy bits to pad out the tail end of her sojourn.

The first modern pop star Madonna turned herself into a global superstar with sheer determination and a brilliant grasp of pop culture. She was never the world’s greatest singer or dancer but didn’t let such peripheral matters get in the way by playing pop’s golden card- teamwork combined with working within your limitations and making the most of them- in a sense with a DIY punk rock ethic- if you want real singers go to the opera!

This is not running her down. She has made some great pop records- especially the ones where she allows a little madness into her world and that ice cold veneer is allowed to slip for a bubblegum giggle and a slash of colour or slap and tickle to her polished techno pop. True pop is knowing your weaknesses and working round them and making them into strengths. True pop is also about sex. Tell that to the dullards who win prizes in 2015.

With this in mind she has yet again gathered the great team around her tighter than the fateful cape and produced a seasoned pop work that has enough dirt and lust in it to tickle the human heart. With names like Diplo, Avicii, Billboard and Kanye West on board this is pop heavyweight that can’t make up its mind wether its made for radio balladeering or true to its title a real Rebel Heart – fortunately most of the tracks land on the pop innovative side and even a the odd ballad is affecting.

The single Living For Love is one of the those weird releases for a lead single and offers few clues to the album, it’s Madonna as matador flouncing around, surrounded by Cretan bulls in some kind of modern video age take on some kinda of ancient ferltity dance. She looks great, of course, so all those ageist, whinging crap comments can stop now.

Pop has been getting older for  a long time.

Pop is about sex and sex tickles the human mind at any age- maybe this is her final victory flaunting her sex at any age she cares and annoying the prudes and prunes by looking fab at 56. Unfortunately, the song, produced by Diplo,  is a bit so/so as it echoes the 80’s pure pop Madonna floating  around trying to find the killer hook and was maybe the stats song for radio – but no-one should bow down to radio and some of the albums freakier turns would make far better singles. Radio should come to madonna not the other way round.

There’s plonky piano ballads like and the motivational Madonna of the title track- the defiant pose of the performer and the self made pop creation delivering the empowerment sermon from the hills of the 51st floor of some Manhattan hi rise- the song comes complete with a sample of Mike Tyson doing the same kind of spiel – another self made American carved from the same kind of can do block of granite as Madge.

Body Shop is perhaps the album’s best track- with Madonna going almost all Paul Simon ye worlde music over a Mali style piece of desert music. It’s a stunningly, effective piece of pop and surely should have been one of the contenders for the lead single off the album. A  great piece of 21st century pop with Madonna’s voice never sounding so good and intimate and is a perfect example of her instinctive grasp of pop culture and the way it now embraces the whole world and the anglo American hegemony is now smashed and the music of everywhere is current as the street crackers to music from London, New York, Mali or Cairo and it’s all up for grabs.

Devil Prey is hooked around an acoustic guitar and handclaps and is a stripped down slice of delicious and intimate pop and another great perfect piece of music produced by Sweden’s Avicii that sounds like it could have come from any decade as it seeks salvation in drugs and even acid and eventually in the spiritual side in a melody that is curiously reminiscent of the classic House Of The Rising Sun.

Unapologetic Bitch is a great tiutle- it sounds like a riposte to the endless spines and critiques that being in the public eye attracts these days. No artist should ever apologise- make stuff, release it, don’t explain . The song bounces along on a cod reggae groove- kinda like the fab Gwen Stefani doing her kooky dubs and is a song of defiance to an ex lover in a piece of deceptive sunshine pop that crackles with a spitting anger vocal delivery – another high point.

Heartbreak City has swearwords and is a big booming eighties hair ballad, Ghosttown is another big ballad in a schizophrenic album that seems to compromise partly of these more mature  works, it’s a relief when the song kicks into a big pop groove.

Illuminati is a great piece of dark club pop as Madonna lists the message board David Icke faves of the New World order before she decides that the dancefloor is where the real rulers are . She also does that talking over the rhythm attack thing like she did years ago in Vogue- that always sounded fab.

Bitch, I’m Madonna is a great title- maybe every title should have had the word ‘bitch’ surgically implanted in there – this song is Madonna at her very best- tearing up the dancefloor with a rhythmic genius that combines rapid fire EDM to all manner of breakdowns and stunning rhythms that would make Alec Empire reach for his hat. With Diplo at the controls but with Madonna pulling the strings this is mainstream pop that is more experimental than any hipster music chemistry set and you can still dance to it. Nicki Minaj  pops in for a verse and the song is a perfect example of fab innovative pop and one on the eye for the ‘guitars only’ brigade who believe that pop is a bit naff – sometimes the true madness shit is going on deep in the heart of the pop empire. We demand that this should be a single – the video would be worth the admission fee alone!

Hold Tight oozes in like a psychic fairground and bounds around on a  sombre kind of twisted backbeat tha, combined with the breathless vocal ,could be Kate Bush at her most ethereal.

Joan Of Arc is folk pop that morphs into classic radio pop, while Holy Water is Giorgi Mordor gone tough and low down dirty for the 21st century as Madonna does that cooing sex voice as she leers ‘Bitch get off my pole’ in a piece of stripped down, very 21st century, very now, pop- this is another great track and another example of Madonna being at the top of her game 13 albums in – how many of rock’s blokes were this good this deep into the journey?

‘Don’t it taste like Holy water’ goes the hookline – not sure how religious Madonna is being here as she horns the vocal in a  holy moly metaphor for the good kings and queens of fuck. She even quotes from her own Vogue in the song. Inside Out swaggers in an enveloping electronic groove as Madonna’s voice floats away before collapsing into the BIG CHORUS.

Wash All Over Me is an older and wiser Madonna doing the big power ballad to bookend the album- a song of regret? it’s hard to tell if Madonna does that kind of thing. It  has one of those perfect choruses but its the dark and low down Madonna tracks that work the best on this album – that’s always been her real strength – not profound statement (although there have been moments when this has work – like on Ray Of Light)  but the really profound world of sex, mind blowing original grooves and playing with her voice and taking on the prudes and ruffling feathers.

Pop used to be about being in your face and out of control and dancing like there was no tomorrow- in the new world of dusty dullards Madonna somehow looks and sound more vital than ever. Could this be her best album? it’s close…