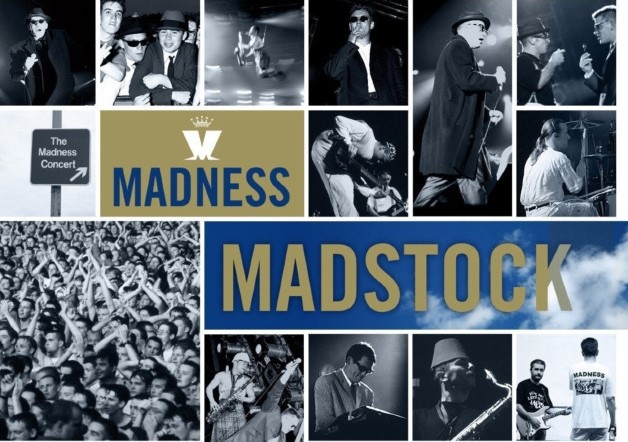 In 1992, six years after the band had originally split up, London’s Madness reformed to play the biggest gigs of their career in Finsbury Park. Over the course of the two dates not only were the band vindicated in their shared belief in their music, but also they would now firmly enter the upper echelons of British Pop royalty. Simon Tucker reviews

A lot had changed since Madness had decided to call it a day in 1986. The UK had witnessed the second summer of love and the vital burst of innovation that was acid-house, Madchester had spewed the grime and the glory of E culture blended with Byrds jangle and Can repetition, and our shores had been invaded by an American movement labelled Grunge.

Did we need Madness to return? Would their music still chime with an audience like it did at the bands peak when they were undoubtedly one of the finest singles bands out there? Ticket sales said “yes” but the band were still unsure. How would this crowd react to the subversive pop of Madness? Were they there just to see how the “older” men would fare?

Things did not start well as it is well known that support act Morrissey (who only showed up for the first gig, pulling out of the second date) did not get a great reaction. Moz was in his Your Arsenal phase, draping himself in a union jack whilst singing about National Front Disco’s, an act that many in the audience (many of whom had fought the street battles against the hard right NF brigade who had turned the original skinhead look into a style that had provoked fear and distrust completely against what the original skinheads stood for and what they believed) found distasteful.

Missiles were thrown, Moz left. Oh dear, how would this atmosphere be reclaimed?

It was reclaimed EASILY, with the simple words “hey you, don’t watch that, watch this…” the opening salvo to Madness’ breakthrough hit One Step Beyond. You don’t need to have been there now to understand what a moment this was. As listening to the CD and watching the DVD really hits home how up for this the band and crowd really were. Every single word screamed back at them, Madness look visibly moved and slightly shaken it must be said. Then they’re off and running, careering through a set list that not only plays the hits but also rarities, covers, and album cuts.

Listening again to Madness’ catalog you really understand the dualities that laid within their music. Melodic, bouncy, fun hooks masked a deep and thoughtful lyrical ideal that dealt with everything from mixed race relationships to depression all tied up in a sweet pop bow. Musically tight with not a duff note, the band are fired up and ploughing through an oeuvre that should be held up in the same regard as other acclaimed artists like The Kinks and Ian Dury & the Blockheads, this is the true Britpop, not machismo brought on by dandruff nostrils, but sociological studies of the human condition, kitchen sink drama as effective as Saturday Night and Sunday Morning. Gritty, darkly humorous, and in My Girl one of the finest examples of human relationships and their inherent ups and downs.

This album is a joy, an example of a band not understanding how influential they are or how loved until one magic moment brings it home for them. Madness would use these gigs as a platform to launch the second phase of their career which still carries on to this very day.

A fitting testament to a wonderful occasion, a must buy for anyone who likes their pop music clever, danceable, and joyous with bags of intelligence.

Salvo Sound and Vision can be found via their website