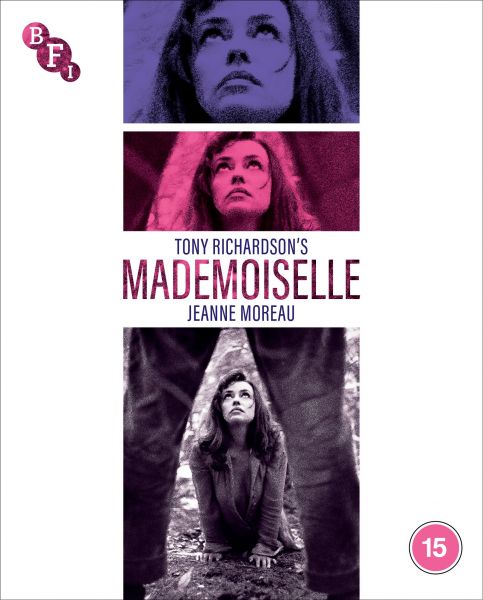 Prim, aloof and immaculately dressed, Mademoiselle – she is never directly referred to any other name – exudes a petit bourgeois respectability and is much admired in the rural French village where she is the sole schoolteacher.

But beneath the facade lurks a monster, a pyromaniac and poisoner. When we first see her, she is cranking open the floodgates of a dam, deliberately sending a torrent of water cascading downhill, where it will speedily deluge a nearby farm.

Moments later, she picks four tiny eggs from a nest. She inspects them on the palm of her hand, then snaps shut that same hand, gleefully crushing them. She returns to the village in time to witness the chaos she has set in motion. Watching on impassively as livestock panic and swim and scurry onto dry land, she takes a special interest in one man rescuing a horse from its almost completely submerged stable.

Before too long she is setting fire to a barn, sending it and the adjoining houses into flames and she follows this by poisoning the drinking troughs of some local cattle, killing every creature who drinks from them. Mademoiselle is not shaping up to be one of cinema’s most endearing characters, is she?

Based on a story by Jean Genet (Bowie’s Jean Genie inspiration), Mademoiselle is played by French cinema icon Jeanne Moreau and it’s impossible to take your eyes off her as she wreaks havoc in the rural community where she has chosen to live for the past year. You try to pick up clues as to her motivations, but these are never made entirely clear.

Since her arrival, she has developed an obsession with Manou (Ettore Manni), a womanising itinerant Italian woodcutter (the man who saved the frightened horse), but how much of her destructive behaviour is down to his presence and the fact he chooses other women to sleep with rather than her? The first fire she starts is accidental but has she acted maliciously in her past? Does she look down on the poor and presumably poorly educated villagers as they frantically attempt to save their few possessions when fire engulfs their homes?

Looking for a culprit, villagers discuss who the ‘man’ responsible for the carnage might be. Collectively, they don’t like the fact that Manou is not one of them, while also envying his success with local women. He is duly made their prime suspect, despite consistently performing heroics during each emergency. Likewise, his son Bruno (Keith Skinner), is viewed with distrust. Strangely, Mademoiselle is capable of showing some genuine concern for the boy, although he becomes a casualty of her cruelty. Watching her humiliate Bruno inside the classroom and in the playground is genuinely uncomfortable to watch.

The entire film is shot beautifully with some inventive imagery, such as when a raging fire is reflected in Mademoiselle’s eyes. Sometimes, it veers off into heavy, almost dreamlike, symbolism. An example of this is when Mademoiselle is shown a corn snake coiled around Manou’s waist and is asked if she would like to touch it.

The dubbing of the French characters did take some time to acclimatise to – although Moreau spoke her own English. She is at the top of her form here. For a boy whose only onscreen experience beforehand consisted of a single day working as an extra on A Hard Day’s Night, Keith Skinner gives a remarkably assured performance too. Manni is fine enough as his father but it is tantalising to imagine Richardson’s first choice for the role, Marlon Brando, in his place.

The film was entered into the 1966 Cannes Film Festival and it won a BAFTA award for Best Costume Design (Black and White), while David Watkin picked up a well deserved nomination for Best British Cinematography.

With its slow pace and lack of sympathetic characters, however, it proved a box-office bomb. Amazingly, Roger Ebert branded it ‘unbearably tedious’, while many French critics proved just as xenophobic as the villagers in the film by putting the boot into English director Tony Richardson for daring to tackle French subject matter. Jean Genet is said to have disliked it too but for other reasons. He felt Moreau was miscast. Too famous, too old and too beautiful.

Mademoiselle’s reputation has justifiably risen over recent years. In a conversation with Steven Soderbergh, Richard Lester called it the most beautiful black and white film he had ever seen, while another long-term and particularly ardent fan has been Patti Smith, who has likened to Moreau ‘a barbed wire fence on fire’.

This is the first time Mademoiselle has been made available on Blu-ray in the UK. For more on the release click here.

Special features include a special newly recorded audio commentary by Adrian Martin; Doll’s Eye (1982), a rare and never before released BFI Production Board film directed by Jan Worth; a new interview with Keith Skinner, and for the first pressing, an illustrated booklet with new writing on the film by Jon Dear and Neil Young.