Home Music Madchester Rave On : anyone remember the street parties outside the Strangeways... 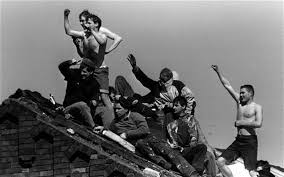 It’s 25 years since the Strangeways riot.

The mad few weeks when the prisoners twisted the authorities melons and took the overcrowded prison in one of those almost inevitable moments that was always going to happen when you cram 3 times as many people into a building as there should be.

The streets that we headed down to after late night city centre parties outside the Dickensian prison were a rabbit warren of redbrick and broken glass and became the backdrop to one of pop culture’s stranger moments.

It’s 3.30 in the morning and in the gloom of the streets there is a motley crew of relatives and E heads monging out, dancing in the misty rain. The prisoners look like twitching ants on the roof dancing like E heads to Snap and other tunes played through a stolen PA on the roof whilst shouting at their loved one in the streets, waving down at their relatives and the ravers whose dishpan eyes are on stalks whilst they were bouncing around the tarmac.

It’s the weirdest rave in the history of the scene and it’s Madchester Rave On gone truly mad and a riot that may have been sparked by the general air of craziness that hung over the city in those months. A craziness that bounced off the roof and was matched in the surrounding streets.

Strangeways is so meshed into the culture of the period it’s hard to operate the prisoners silhouetted and swaggering on the roof and the cool angular poses of the Stone Roses as they swaggered into the charts.

In those lunatic months the city was going crazy and the riot seemed to capture the anarchy and the madness that was also inside the Stone Roses and Happy Mondays music.

It was ugly, dangerous and a chemical party that continued in the surrounding streets.

We went down there, winding our way up from the clubs and the parties and murky madness of the nightlife to continue leerily dancing in the streets as Mick Jagger and David Bowie has so badly sung a few years before.

The overcrowding over the prison saw one of those rare moments when people in the UK took a stand and took the prison. They ended up in the stand off on the roof. It was right in the middle of the Madchester Rave On when the city was teetering on the brink of chemical anarchy and the wild party in the now barley recognisable old streets of the city was on fire.

The prisoners sat on the roof having their own rave and made a statement about the overcowding, slopping out and the caged animal conditions that was all part of the swirl of filth at the time that came from the top down from Thatcher and her mob.

The part lasted weeks and the men on the roof and party detritus were brought together till dawn broke in the misty Manc rain when even the dancing party loons were getting burned out and staggered back to their beds leaving the prisoners to the roof for another long day.