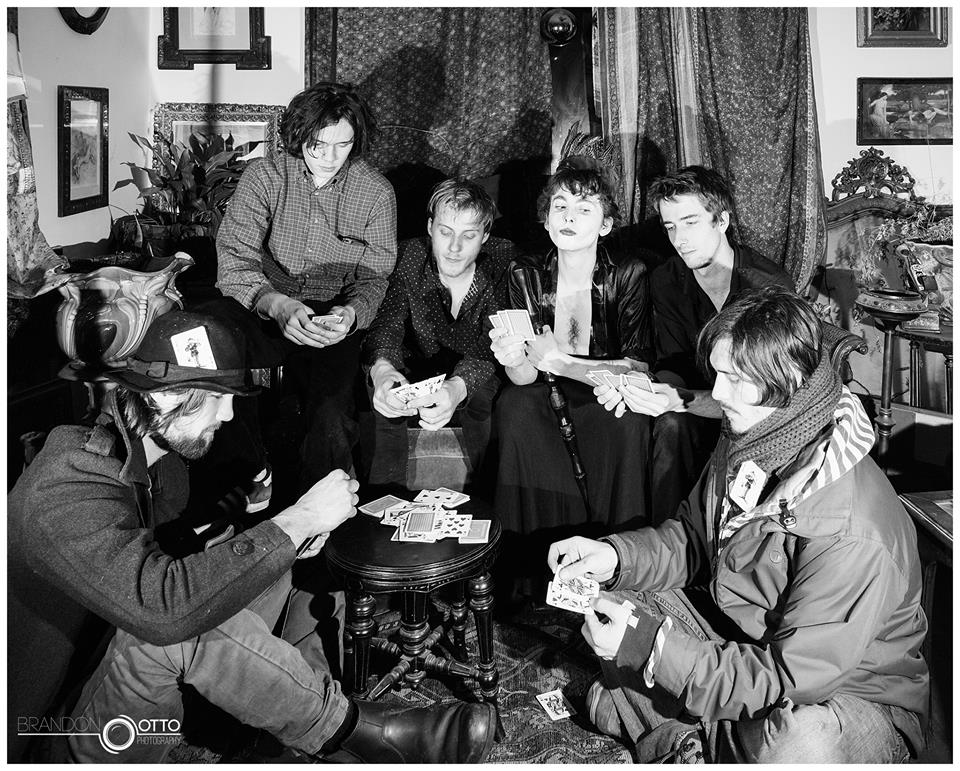 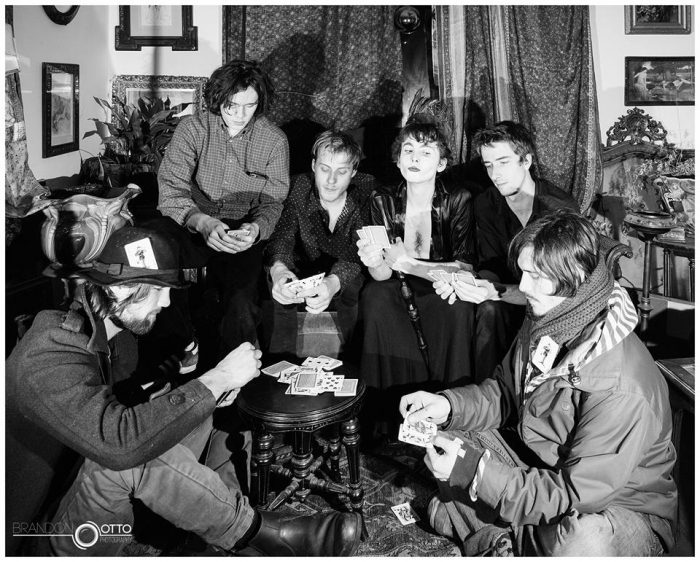 Debut EP by lunatic royal and his freaky crew reviewed by Lady-in-Waiting Sue Blackwood, who took up rock journalism solely to communicate her love of this band to the populous.

SOME NOTES on FREAKERY: Long before negative connotations became attached to this word, ‘Freakery’, in its arcane sense, was associated with celebration and a sense of wonder.

In the hippie counter-culture of the mid-late ’60s, musician Frank Zappa and The Mothers of Invention (amongst others) embraced the concept of FREAKERY as being the process by which individuals cast off restricted standards of thinking, dress and social etiquette in order to express CREATIVELY within their environment. For the benefit of readers below the age of 50 plus, back then, ‘freaking out’ didn’t mean losing the plot.

In the 21st Century, “Freak Bop” is the genre-defining term that Mad King Ludwig & The Mojo Co. were smart enough to invent as a self-description of their music style. To invent an entirely new genre for your own sound is a stroke of ingenuity; a pre-emptive strike against being unimaginatively and (often) inaccurately pigeon holed by the labelling of others.

That said, the creative outpourings of this talented six piece are not simply defined. Collectively, they deliver something rare, exciting and refreshingly unique, a taste of which is showcased in their debut EP, ‘Freak Bop Stew’, being launched on January 13th 2017.

I have been hogging out on ‘Freak Bop Stew’ ever since being treated to an advance copy before Christmas. To listen to this band in a studio setting has been a new and rather special experience for me, not least due to the fact that Mad King Ludwig & the Mojo Co. deliver theatrical live performances that blow the mind, placing them in a class of their very own.

In view of the spectacular nature of their live act (which, if you’ve not yet caught, I would urge you to do at the earliest opportunity), any commentary I make on their music would feel oddly lacking without a nod towards the impact of this band on those present at their live shows. So much of the band’s identity, as I have experienced it until now, has been inextricably linked with their extraordinary live performances, led with breathtaking energy by a frontman who embodies the spirit of ‘freakery’ at its most gloriously creative. From the instant he first wafts into view, the former Bavarian monarch immediately captivates each new audience member purely on the strength of his appearance alone. Looking like he may have just accidentally wandered off the chorus line of Brecht’s ‘Threepenny Opera’, the Mad King presents a startling vision, adorned in his selection du jour from an eclectic array of unusual vintage stage gowns, complete with smudged kohl black eyes, chalk white face paint and crimson lips – with the make up always looking as though applied yesterday and slept in overnight.

Then, quite suddenly, before everybody is fully at one with the mad monarch’s air of other worldliness, an unexpected sound erupts with guttural force from somewhere deep and gritty. The growling voice of the gravel pit rises up and powerfully (inexplicably) ROARS from a set of lungs belonging to an older, bourbon drenched creature from another place and time. This is always the moment of true delight at a Mad King Ludwig & Mojo Co. gig – when an audience first encounters THAT VOICE, emanating from the tiny, slender frame of the delicate looking nymph occupying centre stage.

The high octane drama that characterises the wildly frenetic romp that is Live Freak Boppery is the stuff of audience seduction, but an appreciation of the finer details to be found amongst the broad spectrum of talent that comprises this band, has been achieved with the recording of this cd. Hearing them outside of a gig context has been a genuine pleasure.

All of this works as well as it does because, at its heart, lies a keen intelligence and sharply observed wit, shared and exemplified by each member of this free thinking, experimental cohort of like minded souls. The entire ethos of this band is founded on and realised through what I can best describe as ‘true love’. There is a touching and impressive authenticity at work here, perfectly executed by talented musicians who really know what they are doing, work hard at it and so clearly LOVE what they do. They possess an infectious, frenetic energy, matched by an expansive willingness to experiment, play and generally spread the joy. They are highly industrious – you don’t sound this polished without a lot of rehearsal time and, in a very short space of time, have carved their own niche from which to deliver their own special groove.

There is an entire canon of musical styles, performers, genres and influences that play a part, somewhere, in the journey that has resulted in this moment and this sound, much has been said on this before, both in print and in discussions by excited audience members, discovering them for the first time (me included). What sets Mad King Lud & the Mojos apart is that they can’t be labelled, defined or neatly boxed to fit any pre-existing model, regardless of who you can ‘hear’ in their body of work. I adore the subtlety and lightness of touch that is woven into the fabric of the homage they pay to a great many styles and genres, simply by existing as they do.

The artist with which I frequently hear them compared is Tom Waits, because of the Mad King’s distinctive vocal growl. Some…a bit…not entirely. A lot more has been lovingly poured into the mix to produce that voice. I suspect a soul-selling negotiation with a certain Mr Luis Cipher may have entered the frame at some stage (Alan Parker fans, pay attention…) I like to think so anyway. To that we might add, in no particular order of preference or likeness, Don van Vliet (of Captain Beefheart), Jim Morrison, Ray Manzarek, The Sensational Alex Harvey Band, Dr Feelgood, Roxy Music, James Brown (actually, I struggle with that comparison, but it’s a popular one), Nick Cave, The New York Dolls, Dr John, Mad King Louis (aka Louis Prima) from Disney’s ‘The Jungle Book’, John Chiltern’s Feetwarmers, Kurt Weil, Bertold Brecht,, together with a list of other names I can’t much see the point in naming. Stylistically we have the Blues, Jazz,/ funk, rock, psychedelia, reggae, Avant Garde-ism…..Badda Bing, Badda Boom. I have popped this in as some frame of reference that sometimes people like to know about when new to artists and their work. It has its place, but the more I see and hear of this band, the less comfortable I feel with it.

What is abundantly clear is that the end result to date is the stew they’ve cooked up from all the snips, snails and puppy dog tails. FREAK BOP STEW!

The four tracks chosen for the EP are a good representation of their eclectic, diverse sound. Musically accomplished, as previously acknowledged, these songs display a tight, disciplined and polished performance uniformly across all four tracks. The trademark vocals of frontman King Ludwig the Mad, is consistently dirty, from across the Bayou and down in the swamps of N’Awlins. This is the voice of every Absinthe soaked black man that sang cos he was a Bluesman, a crazy man, a fella who pushed a broom in various bar rooms, beat up a woman or five, loved a further 40 more besides, saw the inside of a prison wall on a number of occasions, lost the fingertip of his left pinky finger in a gambling debt, most of his teeth to Absinthe and too many fights to keep count. He’s sweated blood and bullets in every low dive on Bourbon ….All a good half century before the young Bavarian monarch had tasted his first sauerkraut. I hope this does him justice. That’s where that voice comes from to my ears.

The main feature of the EP is being able to appreciate the cornucopia of styles that work so impressively together. The guitar work is stellar throughout, as are the drums and I have been particularly impressed by the range of sounds produced by the keyboards – again – evidence of different influences on this instrument which is something I’ve not been so aware of when at gigs – truly imaginative arrangements.

Track 1, “ACCOUTREMANIA’ The song they often open with at gigs, a slow, laid back funky jam with a lazy reggae beat, fabulous organ work zips up the tempo and strong guitar, dominant. Some excellent keyboard licks throughout.

Track 3: “TAKE YOUR PARTNER BY THE FOOT’. A floor-filling favourite with audiences. Resoundingly camp, jazz swing, delivered with a jolly gusto, faintly reminiscent of George Melly!

Track 4: “CANNIBALE” One of my favourites on account of the atmospheric, broody darkness generated by the musical arrangement. The swampy Voodoo growlings stomp with barely legible enunciation, but grim determination, through a progression of increasingly flamboyant, psychedelic licks that twang and reverberate, tele-style, against the unremitting thrash that spells pure hard rock. The vocalist barks disconsolately, whilst ghoulishly recounting his grisly fable and the song briefly promises to rise to something nearing a crescendo, the guitars whip up a storm against the powerful thunder crashes of drum riff. The narrator’s growls lift to an almost climactic series of short wails, as the music tails off and the song winds to its unhappy close, to the gentle lull of soft jazz piano and drum licks and a final flourish of electric slidery on guitar. This song delights me on so many levels and, whether or not it’s intentional, I find it hilariously funny.

One of the surprising facts about this band is that they have not been playing together for a number of years, despite sounding like they’re old hands. They have a discernible confidence and sense of familiarity with their material and one another that generally takes time to hone and flies somewhat in the face of the fact that their public debut took place as recently as March 2016. One of several features that places Mad King Ludwig & the Mojo Co in the vicinity of that elusive thing known as “it”. Whatever “it” is, this lot appear to have nailed it.

The ‘Launchaganza’ of ‘Freak Bop Stew’ is happening at The Joiners, Southampton on Friday January 13th, 7.30PM

All words by Sue Blackwood whose authoress profile is here.