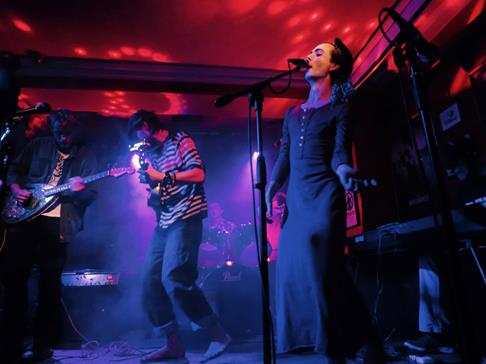 Sometimes the best writing about music and its power to thrill comes not from jaded critics and full-time bloggers, but from cool people, like Sue Blackwood, who posted this heartfelt review on her Facebook page. She is happy for LTW to share it, to spread the word about this fabulous band who have been described as  “Sounds like James Brown & the Famous Flames in a hurricane; feels like a velvet sofa hurtlin’ through a jazz club.”

The discovery of something wonderful.  – MAD KING LUDWIG and THE MOJO Co.

Oh my actual word – WHAT a NIGHT that was. I am SO glad I was there!! Thank you, Dan O’Farrell, for bringing them to my attention.  MIGHTILY delighted that I went to The Alex last night. Perfect finish to a lovely day.

So, a band of stripling youths in their (very) early 20s shuffle on stage. The guitarists all look generically Indie in dress and stare down at their feet in that way that Indie kids sometimes do. They all looked a bit glum.

Then, by complete visual contrast, the singer sashayed into view in his red midi dress, bare feet and silk head scarf, wrapped Hendrix style, around his crown. Chalk white Kabuki face base, smeared on crimson lips, kohl smudged eyes – overall effect lacked impact and looked a bit half arsed. I tried to remain open minded.
He was clearly different. I just didn’t know how, yet.

Very tiny in stature, whippet thin and painfully fragile looking in general, as if a puff of wind might blow him away.

These were the assorted members of the most surprising band I’ve seen in a long time. MAD KING LUDWIG and the MOJO Co. Remember the name.

They started up, all quite low key. Then, not far past the first few chords, the audience at The Alex got a very big surprise.The exotic little frontman opened his mouth and began to emit sounds that smacked me right between the eyes.

I’d anticipated something fey, maybe reminiscent of Marc Almond.. Instead, an almighty ROAR came walloping out of his tiny frame at a decibel level that defied everything. My jaw hit the floor in complete astonishment. I literally couldn’t believe my ears. Nobody could. HOW could THIS MUCH NOISE be coming from that tiny figure?

His voice belonged to a man 30 years older, with a big barrel chest and a thick neck.

HE is HENRY BAROCHE and he is a TOTAL STAR.

THIS was Captain Beefheart’s gravelly Voodoo growl-howl (all the way up to eleven). It was early Tom Waits with massive balls, cut with dirty, raw ’70s pub rock – Lee Brilleaux’s frenetic harp – Dury’s swagger and wit. The howl of The Sensational Alex Harvey Band was in there too – perfectly linked with the Avant Garde and some cleverly nailed references to the final gasp of the Weimar Republic’s dying breath in the late ’20s – early ’30s. Their theatricality was so spot on, nuanced and aware in all the right places. They were tight. They rocked and throbbed chords with passionate gusto and sounded as though they’d been doing this together for years, instead of (as I was told) less than a year.

They are from SOUTHAMPTON.

The absolute BEST thing, for me, was to hear all this from such young guys. I was delighted to be surprised in that way and felt uplifted in my soul and encouraged by this discovery. This was an entire genre of influences that I (in close-minded, old git fashion) would never have imagined them to be aware of, let alone so skilfully au fait with.

I don’t wax gushingly about the many great bands I see locally. We’re lucky to have such a diverse, vibrant live scene in our city and I truly appreciate it. However, I don’t get to see so many young, upcoming bands nowadays – which is my fault really.. It’s always great when I do find for myself some new talent. Tonight took me to a different zone entirely though.

I predict good things for these dynamos and I would encourage you all to check ’em out.

They’re at The PLATFORM TAVERN next Thursday night, 29th Sept.. (the Amersham Arms in New Cross on the 30th and play as part of Music In the City (in Southampton on 1st October)

All words by Sue Blackwood.  This is the first ever review Sue has written.  Live photo by Stephen McCathie who has a full photostream here 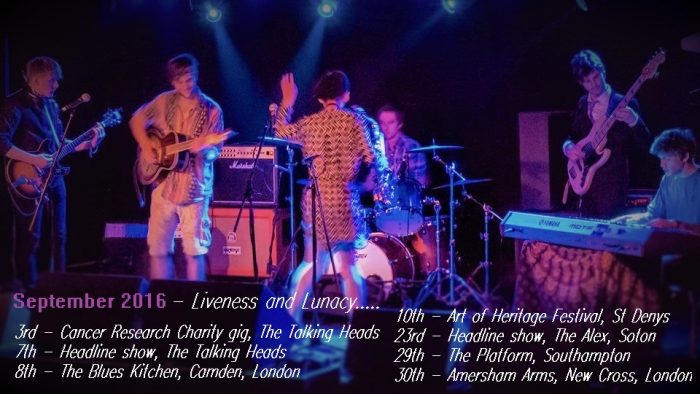