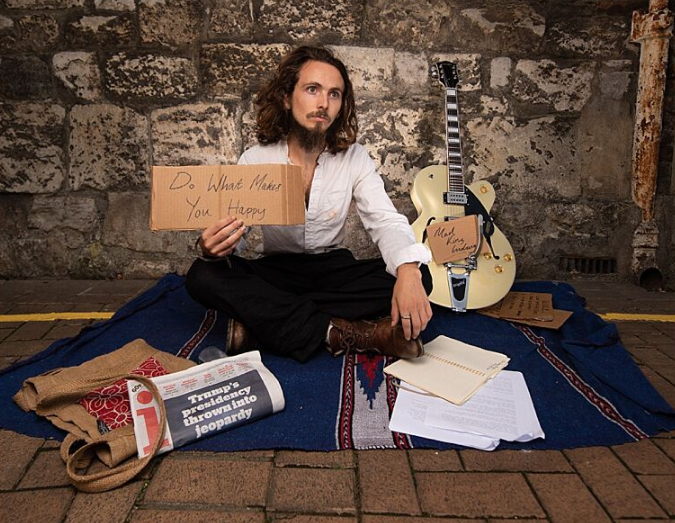 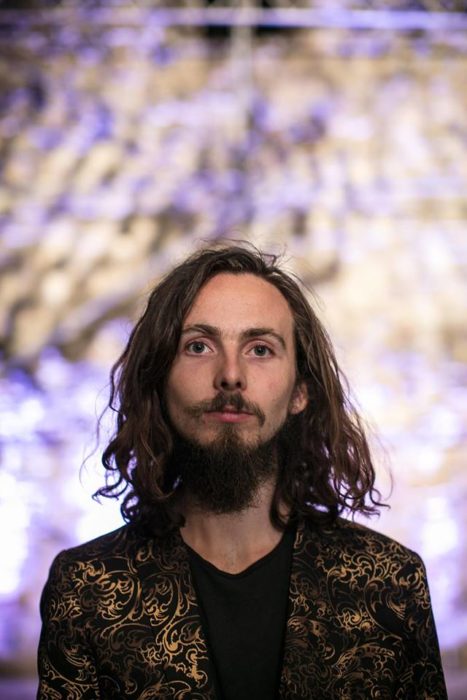 Mad King Ludwig: Do What Makes You Happy  (Happy Moan)

Solo album by his Bohemian Highness, without his regular band,  the Mojo Co, showcases a unique young talent constrained only by his budget.  A strange and wonderful debut from a wonderfully strange artist destined for Greatness.

Do You Remember the First Time you heard Bjork? or Antony & The Johnsons? or Captain Beefheart?   A singing voice so different and distinctive that you’d never heard anything quite like it -but you were initially unsure whether or not you actually liked it, yet were curious to hear more…  Well, maybe this will be a similar experience, the first time you hear his Royal Highness, Mad King Ludwig.

It could be, that you will fall under this albums spell instantly… it could be everything you have been waiting for… an album which defies categorisation by a quite incredible young artist resurrecting ancient forms of music in a singular and stylized way… with a wisdom beyond his years and a humanitarian message of love.

But if, like me, you are too bogged-down in rock’n’roll and have never ‘got’ the work of Tom Waits, Dr John, Captain Beefheart… let alone modern jazz and the Delta Blues… then it may take a bit of time to grow accustomed to. But it is worth the effort.

Thirty years  reviewing bands in my home town and this is probably the most difficult ever!  Henry, who hides behind his Mad King Ludwig persona is a hugely talented, enthusiastic and likeable character. He occasionally writes for Louder Than War and has been written about by our mutual acquaintance Sue Blackwood in these webpages.

He is going to be…. I hesitate to say ‘a star’ or even ‘famous’ as those kind of terms are meaningless in these  shallow media-saturated times...  an inspiration and will make his mark as a fascinating artist.

Discussing Mad King Ludwig with a wise man  I told him my thoughts; it would not be ‘overnight success’ for the insane regal one- but like The Greats ( y’know Bowie, Nick Cave and the like) it would be maybe five or ten years before the public actually grasp and realise his Greatness.  It will take time, a lot of gigging, but the man behind the persona in question is a true artist, driven and a complete one-off.

Personally, my only reference point with the music was Nick Cave and the Bad Seeds – but in place of their biblical fire and brimstone, the King has an spiritual zeal and positivity: He is a Good Seed rather than a Bad One.

He sashayed into Southampton three years ago and has conquered the city’s insular underground and indie music scenes  simply by being so ‘different’, so cool and such a nice chap and by giving such astounding performances with his ‘Freak-Bop’ band the Mojo Co. (Check out their Youtube channel).  With the band ‘on a break’, new songs flowing, it was time for a solo project.

The King sent me a thousand word track by track breakdown of the songs on the album, in which he refers to himself in the third person   -a quirk of the ‘mad’.

Beginning with the wonky stomp of ‘Look ‘Em In The Eyes’, the retelling of an encounter Ludwig had with a lizard-eyed inebriated poet in a bar in Paris, Ludwig iterates the importance of finding the humanity, or lack thereof, in the eyes of the beholder. Genuine human connection is very much part of Ludwig’s art, and he has often been known to be able to name the exact colour of his audiences pupils, or to look right down to the soul of a video camera.

‘Grow Up Too Fast’, a track which betrays Ludwig’s Bowie-esque pop leanings, is a love letter to his younger self, to those younger than him, to hold onto their innocence and childlike delight in the world, even as they grow older and are expected to be more ‘adult’. The spoken-word piece that is blared out through a loud speaker over the top of the instrumental section is the expression of the inner voice that many of us, particularly men, are expected to conceal. Any resemblances to any presidents of the United States are subject to interpretation.

The contradictions which are the essence of Mad King Ludwig are: There is No-one Else in the World making music and writing songs quite like this. He is incredible..(But) He is obsessively influenced by Tom Waits and sings in a similar way, a gravelly foghorn using the same Deep South pronunciation of  flo’ and mo’ for floor and more.  (And) These are songs of love and pain and politics  which are from the heart and soul, yet they are performed by a constructed character, a Mad Bavarian King  using jazz, blues, improv and hokum.  Once you accept these contradictory conundrums then you are ready to devote yourself to the Pied-Piper-like charms of Ludwig.

Henry is very much ‘himself’ in the video interview below – which I include mainly for the version of  Drowning On Dry Land’ at the end.

(the rest of the album, track by track – MKL first, then my comments)

‘Never Been A Stranger’, taking a leaf out of Idles’ manifesto, is Ludwig’s attempt to put himself into the shoes of those in the world who go against the accepted wisdom that human society as a whole is moving towards globalisation, and that this is an overwhelmingly good thing.

A zig-zag wanderer of Beefheart meets Waits with a slight Prayers On Fire feel.

Inspired by a transcendental moment Ludwig experienced, ‘Fire In The Hole’ is a juke-joint style ragged Blues romp, raging against the pompous and self-righteous… which  channels the hellfire ghost of Blind Willie Johnson.

This one is more First-Born era Bad Seeds with a PJ Harvey swing and sure to be a live favourite.

‘Drowning On Dry Land’ is very much a river song, recounting the tale of how Ludwig’s own houseboat had almost sunk on New Year’s Eve’ and evokes such cinematic Tom Waits pieces as ‘Shore Leave’ and ‘Rain Dogs’

Just watch the video above -but the album version has sax and is a soulful work and a highlight.

‘Do What Makes You Happy’ is Inspired by the frustrating and challenging aspects of being an independent artist in an increasingly competitive musical landscape, it is his attempts to get back to basics.

The centre-piece of the album, but in need of some gospel-backing singers and stronger percussion perhaps instead of boogie-woogie piano.

‘Protection’, is an atmospheric piece that speaks of Ludwig’s grounding in the myriad world of Jazz.

This is, or could be, Ludwigs ‘Wild Is The Wind’, but this version is more a rough sketch than the finished masterpiece….

Riffing on the more puritanical elements of religion, ‘I’m Comin’ Up There’…

Reminds me of Nick Caves version of ‘Jesus Met The Woman…’ and suits the kitchen-sink percussion and blues-acoustic setting… and Ludwig sounds like he’s having fun.  I Love this song.

Closing the record, ‘At This Time Next Year’ is a tender musing on where we are now, and where we are next year, and a willing surrender to let come what will come. With gorgeous string parts scored by Rufus Grig (Dan O’Farrell & the Difference Engine), and played by Rufus and Philipa Baldwin, with melodic double-bass from David Curtis (Sombrero Fallout), the tune showcases Ludwig’s knack for melody, and his ability to carry a more sensitive and delicate number.

This is tremendous. A tender love song… a tearjerker if ever there was one. (Knowing Henry got engaged to be married this year makes it all the more wonderful.)

A strange, wonderful, idiosyncratic album which will divide opinion – coming to it ‘cold’ without having seen the Mad King live must be bewildering… He is a strange-fish, an oddball but a right-royal talent brimming with a charismatic eccentricity, love and ideas.  A musical monarch like Ludwig only comes along once in a blue-moon.