E M Forster’s short story has been turned into an album by Hawkwind, a song by Pauline Murray & Penetration and now the soundtrack to this theatre adaptation has music by John Foxx (and Benge).  Ged Babey seems to be obsessed by the story as he now reviews the stage production.

This was the best ‘gig’ I’ve been to this year. It was like one of those really, really good episodes of Doctor Who or like seeing Silent Running for the first time, but it was proper ‘theatre’ maan!  (OK, OK, I’ll calm down…). You don’t get a lot of Science Fiction in the Theatre, but this being E.M Forster in his brief having-a-pop-at-HG Wells phase, it has gravitas and cross-over appeal,

E.M. Forster is best known for his exquisite novels, but his short story masterpiece published in 1909 is astoundingly prophetic and poignant in 2016, and is a chilling prediction and exploration of our increasingly complex relationship with technology.  In a dystopian world where humans have retreated far underground, Kuno alone questions their now total dependency on technology to live and communicate with each other, but in his struggle to break out can he reach the Earth’s surface before the Machine stops?

I am not a theatre critic. I write about rock music, but I have a passion for classic science-fiction as well. The three art-forms combine forces in this and various adaptations of E.M. Forster short story from 1909.  I don’t imagine Forster would have predicted that it would be reinterpreted by hippy space rockers (Hawkwind), a punk band (Penetration) or an electronic music pioneer (John Foxx).  He did however, astonishingly, predict the Internet, Skype and a kind of Facebook where like-minded people give lectures to each other.

It is a sheer coincidence, by the way that the director of this stage version shares Forsters surname and fortuitous that the first premiere is in Eastleighs the Point, a lovely theatre, a few miles away from where I live. .

I described The Machine Stops before as possibly’ the greatest of science-fictions lost myths of the (near) future.’ which it is.  Like HG Wells The Time Machine or Asimovs I, Robot series, it has been influential and stands as a prediction of a possible Future and a great Sci-Fi story.  The fact it was written by Merchant Ivory productions favourite E.M Forster is the strangest thing about it, given his other, more celebrated works. The production could have been very Steam-Punk, as in essence the story is totally Victorian (OK, a few years out) yet Future Rebellion. 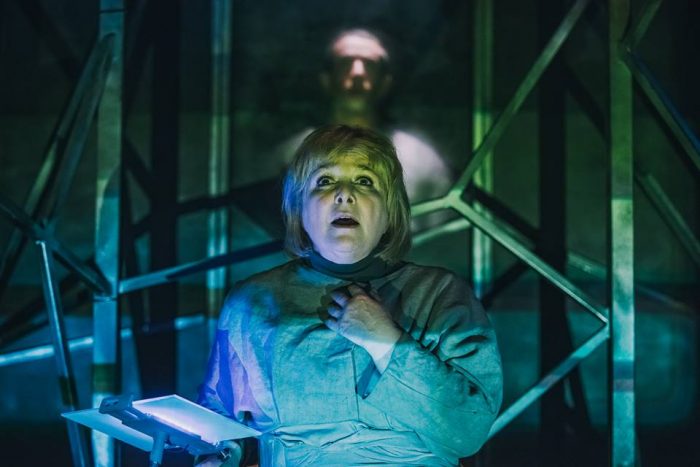 Being very much about a mother/son relationship, used as a way of examining the dehumanizing and devastating effects of technology and automation it is perhaps not surprising that it suits a stage production rather than a big budget cinematic adaptation; although that will come in time I imagine.  That said, how could they show an airship journey to the other side of the world on a small stage?  (Light, darkness and analogue synthesizers, plus, having to use your imagination being the answer)

I did not know what to expect of the Machine Stops as a stage play, and was hugely impressed with every aspect. The set; a hexagonal climbing frame basically and a chair. The music/sound, provided by John Foxx and Benge was used to stunning effect. The acting was faultless, even bringing out so comedy in the source material. The key though was the casting of two acrobatic actors as ‘the Machine’.  A lesser production would have then as holographic images on a screen or a disembodied dalek-type voice. Their athleticism was astounding. It’s hard to explain; they were ‘the Machine’ -tending to Vashti’s needs as well as narrating, in part, and speaking, sometimes simultaneously, as the machine.   When it malfunctions, they take it to a whole ‘nother level.

Caroline Gruber who plays the pompous matriarchal mother is superb, her CV includes a fair bit of comedy so her timing was impeccable.

The only slightly awkward part of the play is when Gruber as Vashti has to walk any distance; due to the almost wholly sedentary lifestyle the characters have withered limbs and weak muscles, the chairs in the story move (predicting electric wheelchairs!). When its only a few yards across the stage the pained, leg-dragging gait seems a bit forced.  But  that is a minor quibble.

Karl Queensborough as the son Kuno, who rages against the Machine gives a stunning performance. Like most UK actors he’s been in Casualty but we will see a lot more of him in the future.

Maria Gray and Gareth Aled who are ‘the Machine’ have the skill of a high-wire act and make what could have been an, intense but dry play eminently watchable for those unfamiliar with the story.

At eighty-five minutes with no interval it is beautifully paced and keeps the audience transfixed for the entire length. The manners and etiquette of Forster were transposed to an oddly Victorian mechanized future and the ideas about religion, the family, freedom and over-reliance on technology were deftly expressed.  The climax is thrilling, if inevitable… Spoilers!

I was pleased to see some young teenagers in the audience with their cool parents, among the stuffy old theatre buffs and the odd Hawkwind fan and John Foxx followers. This is a great production for the Harry Potter/Dr Who demographic as well as Steam Punks,  the seasoned theatre-goer and the sci-fi nerd.  I loved every second.

The Machine Stops is at the New Theatre Royal, Portsmouth TODAY Friday 10th June and TOMORROW Saturday 11th June -with matinee and evening performances on the Saturday. Tickets from here. The play will then be re-staged for an extensive tour in 2017.