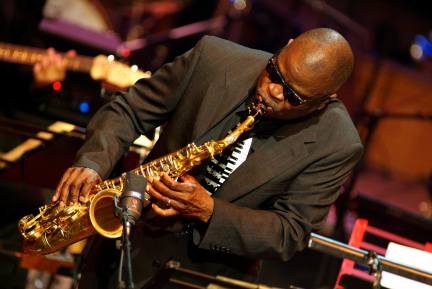 The funkiest saxophone player in the world plays two nights at Chelsea’s Under the Bridge as a part of EFG London Jazz Festival. Louder Than War’s Craig Chaligne was there for the first night.

Maceo Parker and his 6 piece band were booked for 2 nights in a row at Chelsea’s Under The Bridge club, a recent and rather fantastic addition to London’s medium sized music venues. Located underneath Stamford Bridge stadium it can gold 600 hundred people and offers a nice stage with excellent sound. The two gigs were part of the EFG London Jazz Festival and sold out well in advance. Maceo is of course better known for his two decade stint in James Brown’s backing band and his time with George Clinton’s Parliament Funkadelic. Since the beginning of the 1990’s he has been touring solo spreading his funky good vibes all over the world with the help of a rolling cast of extraordinary musicians. His six piece band for the London shows counted Greg Boyer on Trombone, Bruno Speight on guitars, Will Boulware on keyboards, Rodney Skeet Curtis on bass, singers Martha High and Darlene Parker and tonight’s special guest on drums Cora Dunham who played with Maceo in Prince’s band.

The complete band took the stage and launched into “Funky Fiesta” with Maceo joining them after being introduced by long standing manager Natasha Maddison. “Funk is Off the Hook” enabled Boulware and Curtis to showcase their extensive chops on their instruments. Maceo stopped the song with an authoritative cry of “We gotta freeze it”, keeping all the band on their toes for thirty seconds and then calling the end on it. He showcased his jazz credentials on several interludes (“the music that we know how to play but that we don’t play” he joked). An impromptu a cappella version of James Brown’s “Prisoner of Love” during which his band playfully mimed disbelief and boredom, was followed by a rousing version of “Make It Funky” that had the whole room grooving. The Prince cover “Baby Knows” (Maceo played on the original) gave guitar player Bruno the chance to display his virtuosity with a rather splendid solo.  A solo spos for Marta High was next on the agenda with an absolutely killer version of James Brown’s “Think (About It), a song originally recorded by Lyn Collins in 1972 for her debut album on The Godfather of Soul’s own People Records label. Maceo paid homage to Ray Charles several times during the gig and sung lead on a very good version of “You Don’t Know Me”. A quasi instrumental version of Marvin Gaye “Let’s Get It On” give guitarist Speight another occasion to showcase his talents. We were then treated to a great drum solo from Cora Dunham who managed to impress with some really cool patterns.  Darlene Parker give us a great “Stand By Me” which saw Maceo bring out his flute. The gig finished on the groove masterpiece “Shake Everything You Got” that got the whole room dancing.

All words by Craig Chaligne. More from Craig can be found at his Author Archive. He tweets at @ChaligneCraig. Photo taken from Maceo’s official website.