Home Blogs Maccabees split : a personal story on an already much missed band 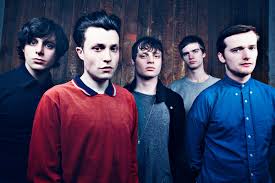 Orlando Magic: Me and The Maccabees.

“This is my boyfriend Orlando, he’s in a band too”

Good name, I think, so I go with my brother Dan to see them at The Pleasure Unit in Bethnal Green.  Orlando meets us at the door and introduces us to the rest of the boys. They look like a band, I think, like a little gang of cartoon characters: Orlando, the softly-spoken loverman, Hugo, the impish rogue, Felix, the quiet, brooding intellectual, Rupert, the impossibly tall skater-boy and Rob, the wild-card.

There are about twenty or so punters in there as The Maccabees take to The Pleasure Unit’s tiny stage. This is 2004 and they’re still searching for their sound, with a clipped sort of Libertines thing going on. Even at this early stage, the songs are really catchy with no fat on them, all about two minutes long. Eventually Felix’s guitar goes so badly out of tune that they send him off into the gents to tune up!

We’re impressed (with the band, not Felix’s strings!) so we get them to do a gig with our band, General Khaki. When we play at The Comedy pub in Soho on a roasting hot August day, they bring about 100 punters down. Wow, they’re getting pretty big I think, little suspecting what’s to come. By then, they’ve changed their sound completely, getting into a dark, angular Interpol meets Joy Division sound. Orlando’s getting more intense on stage too, throwing loads of Ian Curtis-inspired moves into his performance and singing in a brooding baritone.

We become good mates, going to loads of each other’s gigs over the autumn and the following spring, us hearing their sound taking shape and watching their following grow. They crash at my house after a gig and my flatmate finds them hanging round in their pants in the kitchen the next day.

The Maccabees put out an EP on Giles Barret’s Haircut Records and it sells out. We meet Hugo and Felix’s younger brother Will at a Maccabees gig in Brixton Mass. Razorlight are playing the Academy the same night and we bond over our mutual distain for them! Will has his own band The Collars who become the excellent Talk Taxis and will later join as a touring member of The Maccabees.

Dan moves into university halls with Hugo. Hugo is, he says, something of a character. Living off chicken nuggets and vanilla ice cream, he has become frighteningly skinny. He records improvised Dadaist songs with Will (“The best thing about sandwiches, they never go out of style! They taste like Robin Hood!”) and throws his carrots out of the kitchen window. “Why do you buy them?” asks someone. “To throw out of the window” says Hugo.

2 / 4
It’s the following April when The Maccabees invite us to support them at Polar Central in Brighton. It’s a joyous re-union. Orlando hugs us warmly before being whisked away for a briefing by his manager. Hugo is trying to work out one of our riffs on his guitar. General Khaki have signed to 1234 Records but we’re held up in months of contract negotiations. The Maccabees have got a manager and they’re attracting loads of industry attention. They’ve started to nail their sound too, writing some of the songs that will make them famous like About Your Dress and X-Ray.

I spend most of their set on stage behind Hugo, frantically tuning spare guitars for him after he seems to snap a string every song. After the gig, I find myself singing the ‘it’s just what all young lovers do’ hook from About Your Dress. Wow, this could really be something, I think.

Orlando gives me a demo of About Your Dress, Happy Slap and Soar Throat which I copy to book some more gigs in London. A couple of months later, we play together at The Rhythm Factory in Whitechapel, supporting The Rocks because the promoter worries The Maccabees won’t pull enough punters as headliners!

By now, of course, they’re starting to fill venues, Orlando’s starting to look like a very impressive frontman. He confesses he’s frustrated because they’ve supported The Arctic Monkeys: “they’re three years younger than us and they’re already signed!”. It’s a brilliant gig all round, spoiled a bit when Hugo’s guitar (a mongrel Telecaster with a Strat neck, axe fans) is stolen from backstage.

The Maccabees return to the Rhythm Factory for a headline show. By now they’ve got another, industry-connected manger and are in serious talks with major labels. They’re cutting demos for Sony with Gil Norton. Hugo tells me to give him a demo to pass on. Rob pulls my braces aside and nods approval when he finds the Fred Perry crest all present and correct. Hugo has another Telecaster stolen.

Dan moves into a house with Hugo and Rob. He suspects Hugo of pranking him when he finds candle wax down the back of his bomber jacket after a night out. Dan and Hugo have to do a runner from a taxi after another mate pukes all over it and runs off into the night. This is the same mate who, when caught pissing in an office backstage at The Maccabees’ Club NME gig at Koko says “It’s ok, I’m with The Maccabees!”

The Maccabees release X-Ray as a single and it flies off the shelves. General Khaki support Babyshambles on tour and Orlando phones his congratulations. When Hugo falls ill during their first UK tour, I send best wishes to the hospital. Dan and his girlfriend appear in the Precious Time video.

3 / 4
I don’t see The Maccabees for nearly another year. By then, big things are happening for them. We catch up at their landmark Café de Paris gig in 2006. Orlando says he loves my mock-croc loafers and I let him try one on. Hugo gives me a hug, bumping Fred Perry crests together. Rob says he’s had to go to physio for RSI in his shoulder because Stephen Street has him doing so much repetitive hi-hat work. Backstage after the gig, Hugo tells me to pull my finger out and get gigging again. I promise we will but it’s not to be, not for a while anyway, Kat has left General Khaki and we never play another gig.

It’s many years before I next speak to The Maccabees. To be honest, I try not to follow their career: it’s a bit painful watching your mates take on the world when you always hoped you’d be doing it together but, jealous as I am, I can’t help but be impressed, seeing their name on bigger and bigger venues, name going up the bill for festivals each summer, posters all over the tube.

Years later, in 2012, I send Orlando an EP by my new band, White Ape. We’ve been getting a bit of airplay and I hope he can make it down for a gig. He turns up with his beautiful girlfriend, all smiles and hugs like it was back in the day, telling us he loved our set and promising to play our CD at his DJ gig. This strikes me: even when they were the men of the moment, they always made you feel special: if they can do that for their audience, no wonder they got so big. “Enjoy your evening,” Orlando says. “Enjoy pop stardom” I tell him. “Mate,” he says, “it’s the best!”

Three weeks ago, I’m at Stanstead, wheeling a suitcase, pushing my baby girl through security. “Tommy!” someone shouts. “Hi…mate” I say to a shaven-headed man and it’s a moment before I realise it’s Orlando, looking sharp in white vest and open shirt, black jeans and black suede Wallabees. “Who’s that?” asks my wife Vikki. “I think it’s The Maccabees!” I reply.

Turns out it’s just Orlando, surrounded by a few indie-looking lads who happen to be in front of him in the queue, perhaps never realising they’re standing next to the singer of one of their favourite bands. The Maccabees have just headlined Latitude and he’s on his way to Benicassim for what will turn out to be their last ever show. We share a joke about how posh the crowd on the train to Latitude were (seriously, their wellies were worth more than my house) and he hugs and kisses Vikki and baby. I joke about him not travelling on a private jet and ask about the gig. He seems a little subdued and at the time, I don’t think anything about it but I do wonder why he’s travelling alone between gigs.

We say our goodbyes and pass through security on our separate ways. “He’s really nice,” says Vikki, “you expect pop stars to be complete dickheads!”

When I read about The Maccabees splitting up, I text Orlando my commiserations and tell him I’m looking forward to his next move. He replies ‘it was lovely to see you, hope you enjoyed your holiday.’

4 / 4
He is really nice. Not all pop stars are complete dickheads. Good luck with the solo album, mate!