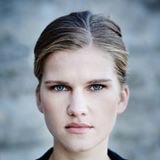 Tallinn Music Week has set the bar very high in 2016.

This is a new kind of music event that has grown out of the traditional conference and new band format into something quite special.

LTW boss and frontman of  the Membranes JOHN ROBB was there to report on this astonishing event that ranged from classical to folk to rap to noise and started his weekend off with the magical Maarja Nuut.

From north Estonia, Maarja Nuut is a startling, original soloist who plays a violin, sings through a delay or loop pedal and constructs these ancient yet futuristic landscapes of ethereal beauty and earthy nature sounds that are utterly captivating.

This is Estonia future entwining with the Estonia past like the ancient forests full of bear and wolves and mystic folk tales that cover the nation and hold the packed huge audience in the venue spellbound and will soon be doing the same across the whole of Europe.

From folk pieces to drones to shimmering delay pedal soundscapes, the songs build up on the pulsating and breathless pulse of a delayed voice banking up layers of beauty and atmosphere before the main voice intones this emotional, evocative poetry in a perfect vocal that sounds ancient and modern.

Every now and then the violin peels out these lines of melody that sound utterly original before the song builds to a hypnotic climax before ending. Then she switches style to a strange folk story delivered as the next piece. Then follows this up with exquisite folk violin riffs  and drones and scratches and those stunning vocals.

Maria Nuut is something else.

This is the second and third time we have seen her and we are lost for words on how to place her music. And this is a good thing.

Perhaps perfectly capturing the spirt of Tallinn Music Week and the Estonian music she is beyond category, beyond cliche and the most startling and original voice out there at the moment who somehow takes an idiosyncratic and original approach that captivates people’s imagination and plays to packed houses everywhere.

Every time I see her she hypnotizes and yet again delivers a stunningly original music to a rapt and packed house hanging onto every nuance of her magical music. Like a charismatic waif she stands there looking into the eyes of the audience on her own with just violin and that pedal that builds up her pulsing and hypnotic voice into a wonderful enveloping pulse of sound.

What astonishing music this is and her deeply personal music taps deep into the swirling melancholy of Estonian folk and the tragic heart of life and the wonder and terror of nature And yet is so damn hypnotic and accessible.

After the the show Maarja tells me about her music with its roots deeply entangled in the wood and earth of her mother Estonia. Mother Nature is the symbol and reflection of emotional swirls and fog cloaked atmosphere. She talks of her months in India studying Indian classical music and the quarter tones of their classical that she has somehow adopted to the Estonian folk tradition before reinventing the whole lot as something that is perfectly her own.

Deep in the woods beyond Tallinn lies the thick silver birch shrouded in mystery, nature and the mysticism of the world just beyond ours. This is a just out of reach spectral and intangible and artful beauty and this deep folk tradition is all here in the quicksilver genius music.

Sometimes you see something so unusual and yet disturbingly beautiful you know that it has the power to capture people. With her stunningly original music Maarja Nuut is going to go all the way and be one of the major new voices in European music in the next year.