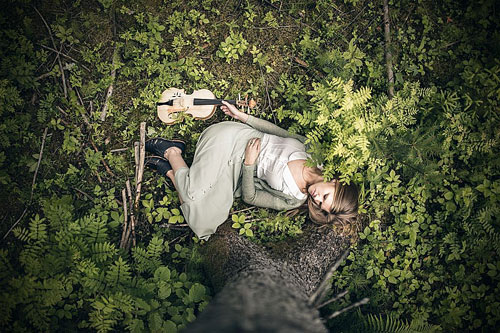 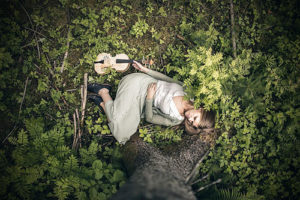 The magic is in the shadows.

Those corners of the forest or those cobwebs of the mind where the imagination runs riot.

Maarja Nuut is an utterly unique Estonian musician who threads that melancholic, dripping beauty of Estonian folk with a 21st century sensibility. This is a captivating and startlingly original set that switches from quiet spoken word pieces to looped dark, misty violin instrumentals that build and build to beautiful crescendos.

Standing in the twilight of the shadows on a stark lit stage Maarja Nuut is quite something.

Her stripped down sparse and atmospheric set of songs and pieces is a mixture of story telling and looped violin as it ebbs and flows in the twilight zone of day and night and the interzone of consciousness and dreams.

She alternates between spooked spoken word pieces and songs of exquisite beauty – like the opening piece which is just her voice looped around and building in layers via a couple of effects pedals. Simple, haunting and beautiful it’s a stark evocation of the dreamworld which she further explores with the between song spoken word pieces about strange walks in the forest and a dripping shadowy nature that oozes a Grimms fairy tales melancholic word wonderings.

Other songs see her play a strange, scratchy and breathtaking violin that layers up with the same pedals as her opener to build up yet another atmospheric journey of melancholy and strangeness. It’s off kilter and yet haunting. It drips that Scandinavian mist swept melancholy and is spectral and evocative as her expert fingers glide across the strings.

It’s one hell of a feat to create such soundscapes on your own and yet she commands attention by her kooky slightly surreal nature and her powerful story telling that weaves webs of words and wonder as she delves an inner psyche. Her instruments build up those perfect soundscapes that compliment and colour her strange and haunting tales of damp woodland and beyond reality and yet with a melody and compellingly beautiful strangeness.

The set is utterly hypnotic and takes you into another world that is sketched out on her debut Soolo album that was even oddly given a heads up by Simon Le Bon on Twitter – not that she sounds remotely like Duran Duran. Quite the opposite. This is a music without bombast and a music without volume and look at me power – this is a sinuous and wildly intelligent story telling by voice and instrument and a mixture of electronics and those melancholic Estonian folk tinged melodies that are the calling card of someone quite special.