Home Blogs M1 Charity Festival set to celebrate the past, present and future of... 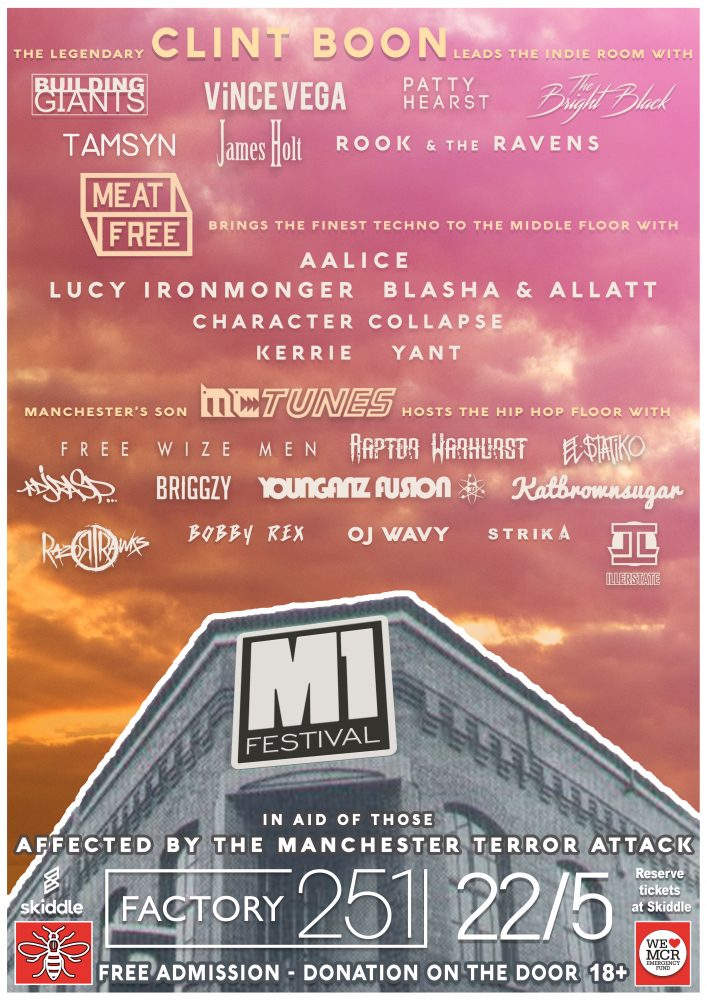 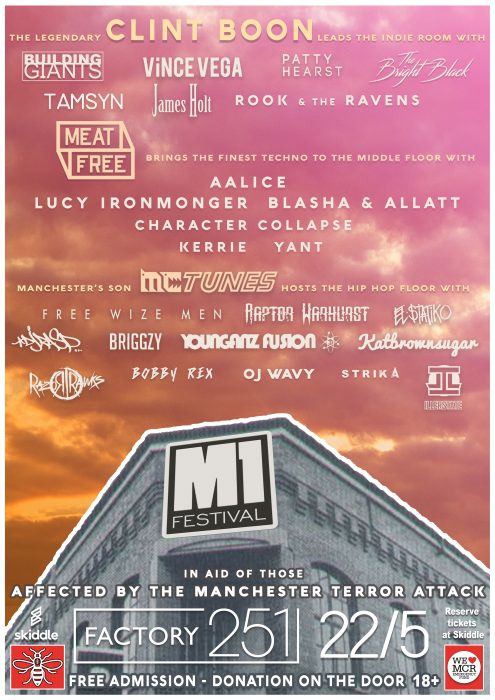 M1 Festival, an event celebrating the strength of character, pride and community within Manchester, will be taking place on 22nd May, a year on from last year’s terror attack on the Manchester Arena, in the hope of raising money for the We Love Manchester Emergency Fund.

The event will take place within FAC-251, located on Princess Street in the heart of the city centre, and will see various artists from across the city come together to remember those who lost their lives, were injured, or rushed to the aid of those affected in the attack. It will also serve as a celebration of the solidarity and unity shown by the people of Manchester, in their defiance and refusal to be divided at a time of such adversity.

Martin Rawcliffe, one of the organisers of the event, had this to say: “On a personal level, the incident [The Manchester Bombing] left me particularly shaken. For me it was too close to home, and the emotions I felt within the following 12-18 hours were something that I do not wish to revisit.”

“The thing that struck me most about the aftermath of the incident however, was the resilience and the togetherness that the people of Manchester displayed in front of the world in a time of such adversity. From Tony Walsh’s poem at the Town Hall, to the flowers gathered in St. Anne’s square, to the “One Love Manchester” concert held at Old Trafford, attracting 14.5 million viewers on the BBC alone. Manchester stood proud, defiant in the face of strife. The Mancunian way.”

The festival will utilise the three-floor dynamic of FAC-251 in order to curate three genres of music that Manchester has become synonymous for over the last 40 years: Hip-Hop, Electronic Dance and Live Bands. Headliners include Manchester icon and XS Manchester presenter Clint Boon, as well as seminal ‘Madchester’ wordsmith MC Tunes and Meat Free – an act whom were recently nominated for ‘Best UK Club Night’ at this years’ DJ Magazine awards

The event is set to commence at approximately 6:00pm and run until 3:00am. However, spectators are advised to arrive 15 minutes before doors to avoid congestion, and to allow for effective security measures to take place.

Tickets are now available via online ticketing website, Skiddle – here. They are FREE OF CHARGE with option of making a donation to the We Love Manchester Emergency Fund.