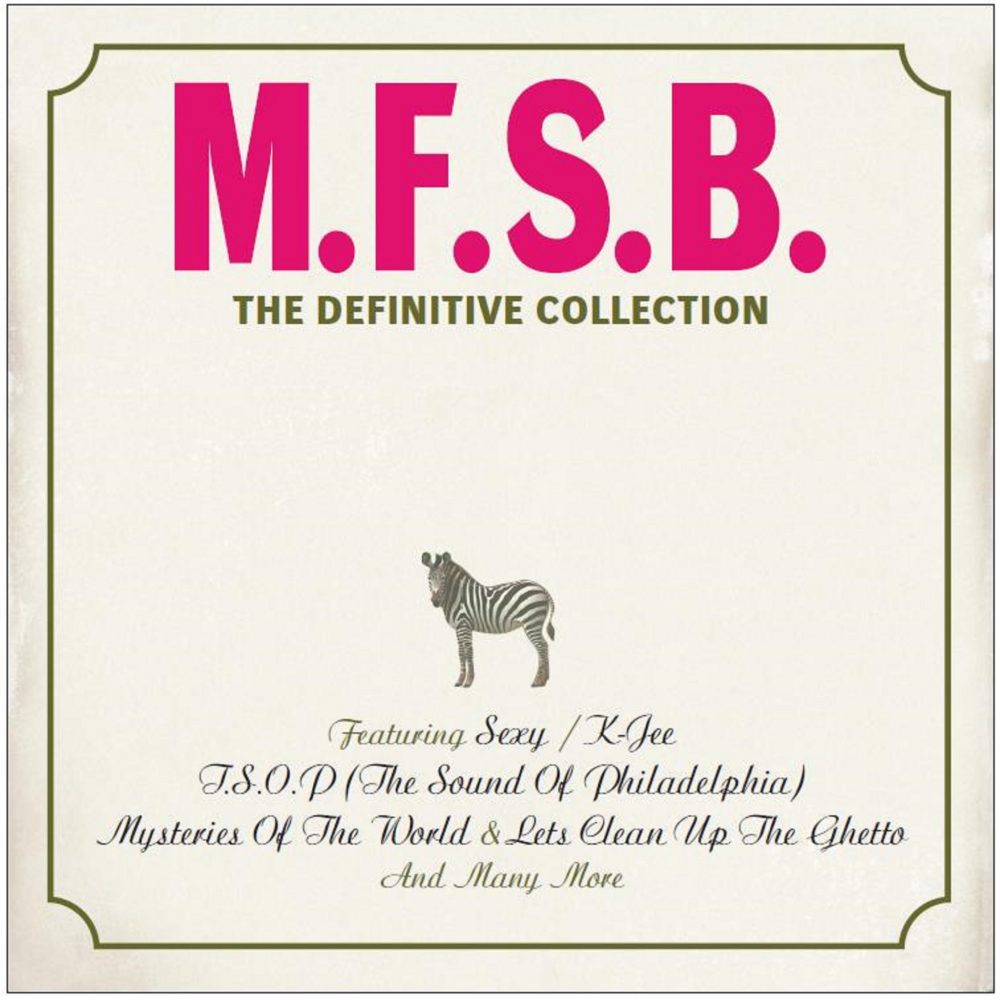 New compilation which does exactly what it says on the tin, featuring full length versions of the big hits of M.F.S.B., who also acted as the backing band for many Philly Sound acts like the O’Jays, Billy Paul and Teddy Pendergrass….LTW’s Ian Canty trips the light fantastic or trips and hits his head on a light fitting, one or the other….

The Philadelphia Sound and the names of songsmiths Kenny Gamble and Leon Huff are inseparable, but another important element was their house band, M.F.S.B.. Though in truth they were more an elite squad to be pressed into service when the time was right, rather than a group per se. Numbering over 30 musicians in full, all of which who contributed at one time or another (including Leon Huff himself), their members came from a wide range of ages, disciplines and backgrounds. But all were used to provide the very smoothest of grooves as Gamble and Huff aimed squarely for dancefloor perfection. With so many talented individuals involved, it is not practical to list them all here, but the excellent Dexter Wansel, Funk Brother Bob Babbitt on bass, Jamaican songwriter and arranger Thom Bell and “the inventor of Disco drums” Earl Young all featured along with many others.

The run of hits which emerged through Gamble and Huff’s Philadelphia International label occurred in the same timespan as Disco, but there was always something about the Philly Sound that set it apart. The mix of Funk, Soul and R&B was allied to classical string arrangements, which along with a hefty does of Jazz, made them sound like movie soundtracks and they brought a whole different aesthetic to the table. By meshing together the different sensibilities, influences and age groups of the M.F.S.B. (in full Mother, Father, Sister, Brother, well that’s the clean version anyway, with the family motif symbolising the inter-generational band) they came up with the magic formula – something with high quality specifications arranged like an orchestra and very classy in construction, but also at the same time with a solid “street” vibe. Above all their concoctions were both very lush and extremely danceable.

Gamble and Huff were smart enough to see the talents contained in the M.F.S.B. ranks was enough to warrant them become a recording outfit in their own right. Mainly playing on their instrumental strengths (backing vocals wash across occasionally, but whoever was included in the line-up at any time could easily work up a head of steam without a vocalist), they became another successful act in Philadelphia International stable. The fluidity of the line up did present a few problems though, as it was difficult to connect with the personality of a band with an ever-changing personnel.

This probably held them back to begin with, as their self-titled debut LP and cover version single of Sly Stone’s Family Affair struggled to make inroads with the US record buying public. It was hardly fair listening to the selections from that record included here, particular the flute-heavy reworking of the O’Jays Backstabbers and the mournful Blues of Lay In Low – both are out of the top drawer. What may have had some negative effect too was the record came wrapped in a controversial sleeve depicting a hypodermic syringe in a coffin, presumably a reference to the R&B/Funk cover of Curtis Mayfield’s Freddie’s Dead. Whatever the reason, the single and long player barely registered a blip.

However much better was to come with M.F.S.B.’s second single and album. T.S.O.P (The Sound Of Philadelphia), the theme to the US TV show Soul Train, was a massive hit and went down as an instant Philly classic. Guest vocalists the Three Degrees used their sweet tones to spar back and forth with a jazzy sax and trademark Philly Sound lavish string arrangements, this potent brew resulting in packed dancefloors and a US number one hit (later on Dexy’s Midnight Runners and Inner Circle covered it). Possibly the first Disco chart-topper, it marked a breakthrough for the music and the parent LP Love Is The Message scampered up to the Top 5 as well, going gold in the process.

This was the highpoint for M.F.S.B. in terms of sales – though the next two LPs reached respectable chart positions, they would never trouble the US national top 30 again. Despite this they continued to provide excellent backing for other artists and each album released by M.F.S.B. contained decent material. In fact, though it wasn’t a hit, third album Universal Love’s smooth as silk third single K-Jee made a big mark in that it featured on the soundtrack of 1977 Disco blockbuster Saturday Night Fever. My Mood, from the same LP, showed another side to the outfit, Bluesy gentle Jazz Funk, really lovely. They certainly could do subtlety as well as out and out dance smashers.

The second album of theirs to be release in 1975, Philadelphia Freedom, may not have arrested their commercial decline, but it worked as a love letter to their hometown. The title track’s appropriation of Elton John/Bernie Taupin’s Philly Sound-inspired effort and the stately and cool South Philly were beauts. Among other highlights were the cheeky, bouncy The Zip and the guitar-led R&B of Get Down With The Philly Sound.

By when Summertime was released in the next year, Disco was just approaching saturation point. Not wanting to be pinned down, the old George Gershwin standard title track signalled a move – the first minute or so in a Jazz style (a scene that a lot of band members would have been more than comfortable with) and the rump of the song aiming more towards Funk. We Got The Time, with its street vibe, ringing guitar and McFadden and Whitehead credit, also was a move towards something a little tougher. If Sunnin’ And Funnin’ was the perfect accompaniment to a lazy day, Picnic In The Park was somewhat more uptight – strange given the subject matter, but the driving rhythm and salsa influenced percussion wins through (Inner Circle may have been listening again, as their 1979 hit Everything Is Great had a similar ringing hook line).

At this point M.F.S.B., along with most of Philly’s star names, took part in a charity album that aimed to raise funds to clean up the inner city. Let’s Clean Up The Ghetto, the title track, made number four on the US R&B charts, a record overloaded with top notch vocal talent like the O’Jays Archie Bell, Billy Paul and Dee Dee Sharp Gamble. A quality slice of socially-conscious Soul, it is difficult not to see this as their last real hurrah. However, despite not being met with much in terms of success, they ploughed on for another three years and a fistful of albums and singles

The final two albums by M.F.S.B., 1978’s MFSB: The Gamble & Huff Orchestra and Mysteries of the World from 1980 did find the band in choppier waters. Disco had virtually ended its run of domination in the charts and Philadelphia International itself was encountering problems, with the high spec sound now seeming a little old hat. The 1978 album was in truth a little weak, with only the Dance With Me Tonight single standing out, a late Disco groove monster. But their last LP was an improvement, with Wansel’s very danceable Fortune Teller making good use of slap bass, synths and flute, while Carla Benson’s quality Soul ballad Tell Me Why may be a bit of an anomaly in M.F.S.B.’s discography, but a fine slow jam nonetheless.

After this they splintered off into many other bands including the Salsoul Orchestra and their discs became sought after when Hip Hop gained ascendency, with the smooth and snappy recordings the M.F.S.B. specialised ideal to be utilised as breakbeats.

At their best M.F.S.B. provided some of the most incredibly fresh and delicately constructed dance tracks of all time. Walking into a disco and hearing something so bracing as T.S.O.P (The Sound Of Philadelphia) must have felt very cool indeed. Though they did tail off a little for me after the Disco bubble burst, there’s still some excellent grooves on board here. The Definitive Collection cherry picks their finest cuts very well. The classy musicianship honed when backing the cream of Philadelphia International’s stars was put to good use on their own material, providing a fist full of stone-cold dance masters along with a number of other toe-tappers. You gotta move when the M.F.S.B. groove!