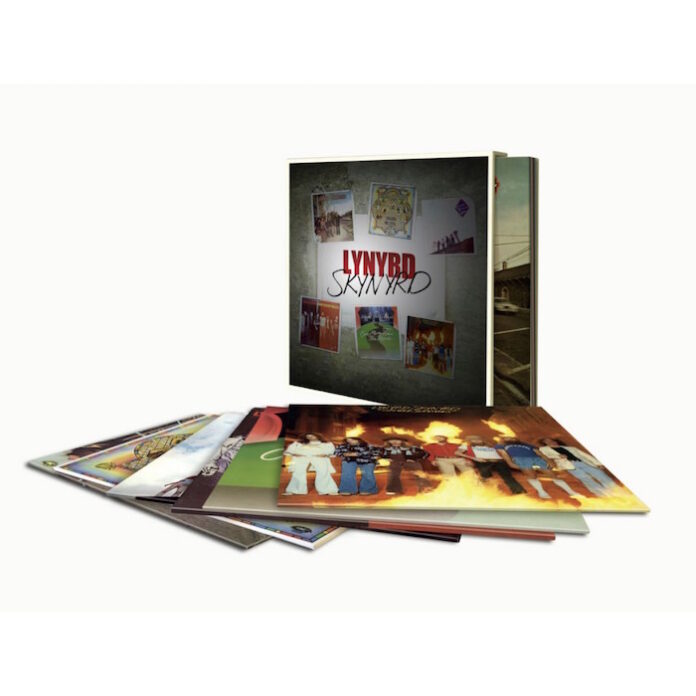 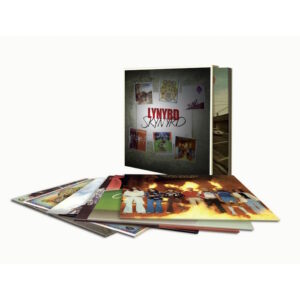 Seven-album strong boxed edition of the Southern Rock originals. Joe Whyte gets his metaphorical patched denim flares on and enjoys the ride.

For many of us from Generation Punk,Lynyrd Skynyrd were part of the enemy. Long hair, guitar solos and beloved of the people we hated.  Generally seen as a bit dusty, their legacy seems to have been trampled in the mud in the rush to reappraise Neil Young, The 70’s Stones, Gram Parsons and even some of the proto-metal such as Black Sabbath.

Ask most people with a modicum of interest in music throughout the decades about Lynyrd Skynyrd and you’ll probably find that their answers include Freebird, plane crashes, rednecks and Sweet Home Alabama. Well, I’m here to try and redress the balance. This is a band that ploughed a single-minded furrow through the fat and indulgent seventies with little attempt to try and fit in; they simply played the music they loved and they did it album after album without a huge change in their signature sound. Jaysus, we all love The Ramones for the same reasons!

I guess that one also has to take into account the influence that they then wielded over later and contemporary artists. The Black Crowes. The White Stripes. Aerosmith. ZZ Top. The Drive- By Truckers. Kid Rock. Georgia Satellites. Nashville Pussy. Damn, you could even lay the blame for Kings Of Leon at the feet of Lynyrd Skynyrd. It seems a shame that they don’t (outside of the pages of Classic Rock) get the kudos that they deserve. Thankfully, this tastefully packaged boxset will set that particular world to rights.

The seven albums (Pronounced  Leh-nerd Skin-erd, Second Helping, Gimme Back My Bullets, Nuthin’ Fancy, Street Survivors and the double live set One More For The Road) sit very much outside the music of the day. Despite the three-guitar line up there’s actually not a great deal of fat on the bones of the songs. Skynyrd could rock with the best of them (see Gimme Three Steps from the debut) but they also knew the value of space and pace-change in their craft. Tuesday’s Gone from the same album is a delicate and haunting tune with the blues woven through it. Skynyrd wrote about the world around them for the most part and taking aside What’s Your Name (from Street Survivors which seems to be one of those songs written about being on the road when you’re between albums and is pretty rubbish) they keep it very much at the level of the working man. Ronnie Van Zandt was a frontman and vocalist who (allegedly) took little shit from anyone, but his voice can veer from the taught rocking of Gimme Back My Bullets to the tender balladeer of I Need You with little pause for thought. Sweet Home Alabama is nowadays seen as little than a karaoke classic but back then the furore it  caused due to the implied feud between Van Zandt and Neil Young was all the talk of the weekly music press. It was, in fact, something out of nothing. Written as a response to Young’s Southern Man, it created more press for both acts than they could have wished for. The fact of the matter was, Van Zandt and Young were great friends and fans of each others songwriting.

The double live set is probably the weakest part of the box . Personally, I’m not a fan of live albums (It’s Alive excepted) and it doesn’t really add much to the songs. If you’re a fan, it’ll be welcomed, however.

The other five albums are a treasure trove of great moments. That Smell  (from Street Survivors) and The Needle And The Spoon (Second Helping) are two cautionary tales as good as anything from Exile On Main Street. Saturday Night Special (from Nuthin’ Fancy) is a classic exercise in Friday-night-Saturday-morning songwriting as you’ll hear. Oh, and as an aside, Freebird is a great song.

The story of Lynyrd Skynyrd and the tragic deaths that surrounded the band are well documented so I’ll spare you the details. Do yourself a favour, however. Give this a listen. You may be pleasantly surprised. I was.