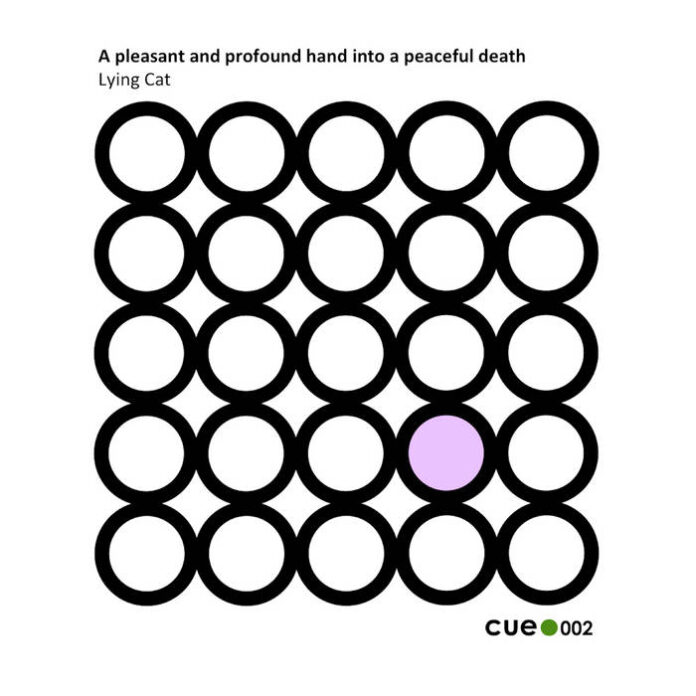 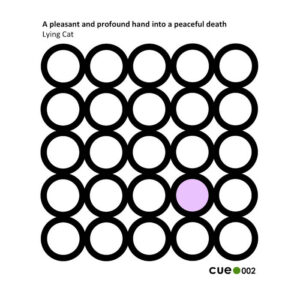 A Pleasant And Profound Hand Into A Peaceful Death

Cue Dot’s second release comes from the mysterious Lying Cat. It’s a soundtrack to a movie never realised and will enthral lovers of sublime ambient electronica. Gordon Rutherford makes his own movie for Louder Than War.

“The most honest form of filmmaking is to make a film for yourself.” (Peter Jackson)

I’m certain that many of us create little movies in our heads all the time. Maybe less so now that we are adults, but I’m sure most of us still do it. Making films for ourselves. But what if someone kindly provided a skeleton of a plot? And, critically, an accompanying entire soundtrack to our movie? Helpfully, that is precisely what Lying Cat has done for us. He/she/they (more of that later) has given us all the raw materials. It’s up to us to direct and write the script. Maybe we are a character. Maybe the narrative and imagery will change every time we listen to this wondrous piece of work.

For some reason, I appear to be strangely drawn to mysteries. The book I’m currently engrossed in is Piranesi by Susanna Clarke. I’m halfway through and know that something is going on, but just can’t figure out what. In recent months, I have reviewed both of Sault’s 2020 releases – albums from an artist or band whose identities are unknown. And now we have Lying Cat. Another mystery. I’m certain that it’s pure coincidence that these inscrutabilities have started dropping into my lap. Not that I’m complaining, because their enigmatic quality isn’t the only thing they have in common. Pleasingly, they are all pretty damn compelling.

So, what can we say about this secretive artist behind A Pleasant and Profound Hand Into a Peaceful Death? Not much, unfortunately, beyond the fact that they are a UK-based producer. We do know that Bristol-based experimental electronic art collective, JILK, have provided contributions to the album. And we also know that it is the second release from Derbyshire-based Paul Scott’s Cue Dot project, following Lyndon Scarfe’s excellent Shoreline, which I reviewed for Louder Than War a couple of months ago.

As a disclaimer, I should stress that this is unlikely to be a conventional album review, simply because this is not a conventional album. In fact, in writing this piece, at times I felt as though I was reviewing a movie as opposed to an album, due to the fascinating concept which underpins this body of work and the influence it has on your mind. Listening to the album, it is evident that it is a soundtrack. It just has that feel, where the tracks beautifully merge and morph into one seamless suite. But intriguingly, the film upon which the soundtrack is based has never actually been realised.

There is a skeleton of a plot, which basically involves a group of elderly residents, on a long-forgotten moon, who decide not to die alone and scared. They rescue an AI which instructs them on building a sound machine which they use to heal. Physical and mental illness is banished, allowing them an easier and more pleasant transition to death. Two of the residents take matters further and use the sound machine to ascend and take on some kind of non-corporeal, astral, ethereal state.

What I loved about the album was the fact that I could take that framework, those themes, and effectively utilise them with the accompanying music as a blank canvas to create my own images in my mind. I could make a film for myself. For example, the opening track, Abandoned Astral Care Unit, is populated by electronic bleeps and the sound of water dripping in a remote cavern in a distant part of our universe. When you close your eyes and listen, I mean properly listen, Lying Cat takes you right there, painting vivid pictures of dark dampness in your mind.

On Leonard Uses The Sound Machine To Teach Stability Of Reality (Lying Cat really needs to come up with catchier song titles) the focal point is a kitsch 1970’s style electric piano before the track evolves into a glitchy, percussive, danceable soundscape. Once again, when listening to the music I could visualise the character in my mind. The way the music becomes more cohesive and complex is precisely how it would work if someone used this alien technology to basically teach them to create music. Simplistic at first, gradually increasing in complexity.

The highlight, however, is the longest track on the album. At just over nine minutes, The AI Aids With The Ascension And Then Interfaces With The Sound Machine is the most sumptuous composition on this collection, with sweeping soundscapes that wash all over you and lift you skywards. In ascension.

Throughout, Lying Cat succeeds in transporting us to this other world. The music guides us through the journey of these people. I found it most immersive by listening to the album in a very dark room with headphones. Moreover, it’s the kind of thing you need to make space for. It’s a proper album, in the sense that it needs to be listened to as an entire suite and not in snackable chunks. And, as referred to earlier, it requires proper listening. You need to invest in it. Muzak, it is not.

It’s a serious body of work and that’s something that I feel potential listeners should be aware of. It’s not something to dip in and out of. Unquestionably, it will appeal most to aficionados of ambient/electronica as opposed to casual listeners, but it’s a fine paragon of that genre.

If you take the time, you will discover that Lying Cat has produced an album that will enthral and stimulate your imagination, with the sounds sometimes complementing, building and combining, oft-times contrasting and clashing, with all of the instruments converging beautifully. It’s a challenging, but potentially rewarding, experience.

A Pleasant And Profound Hand Into A Peaceful Death is available for pre-order (digital or CD)on Bandcamp.