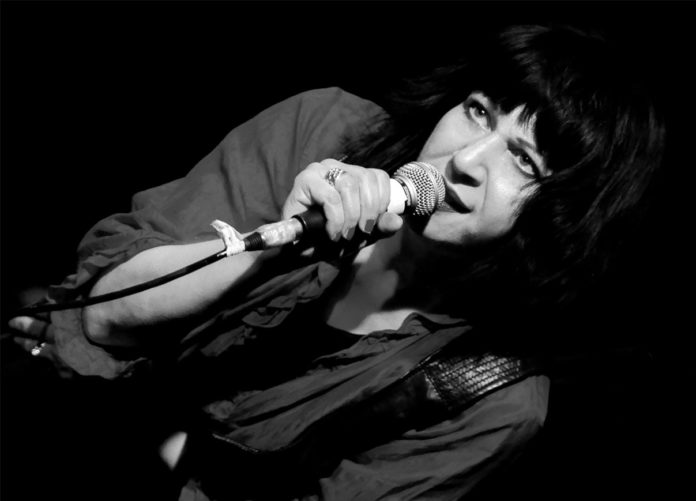 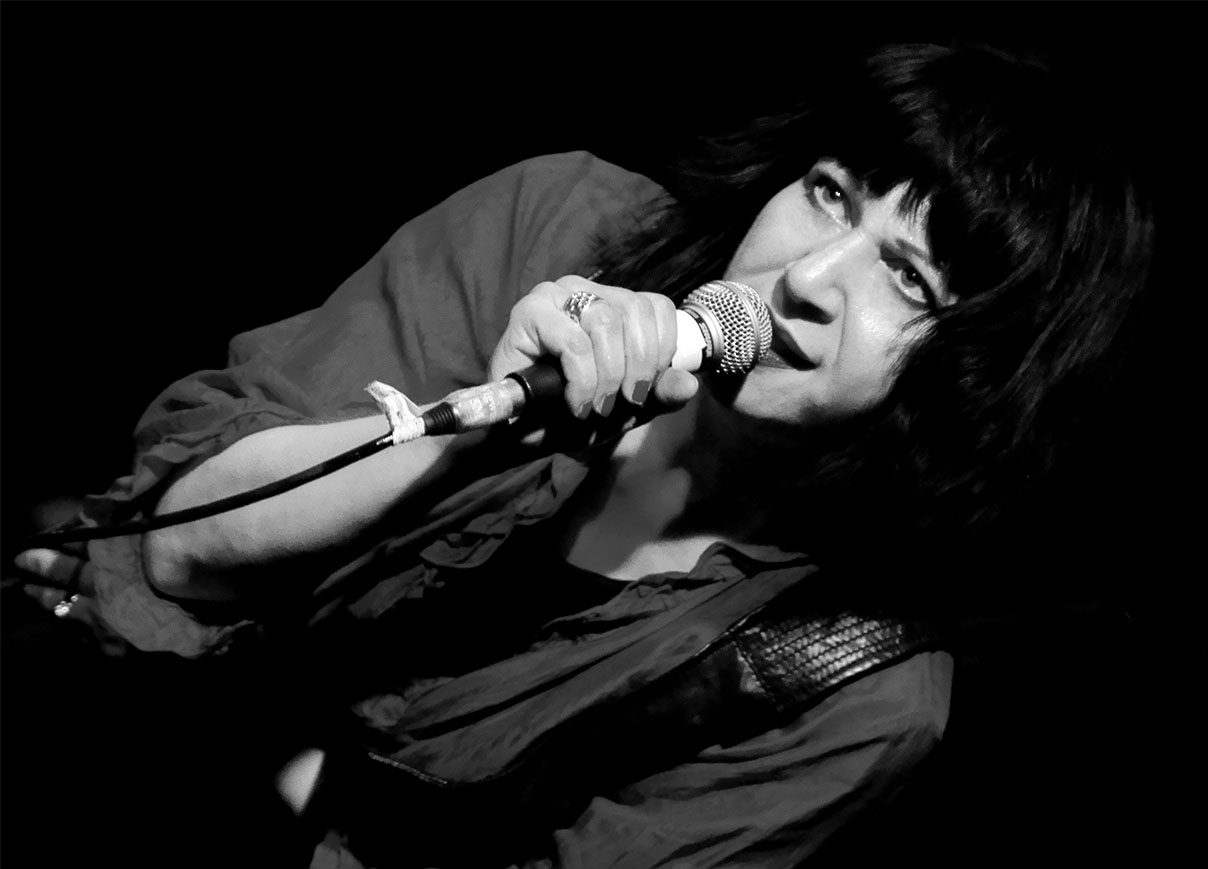 Lydia Lunch brings together the local talents of Louise Woodcock and Slow Knife for her Verbal Burlesque. Rhys Delany reviews.

The Kings Arms is a pub on the Manchester/Salford fringe, the perfect location for outsider artist Lydia Lunch to present a night of Verbal Burlesque. ‘Lydia Lunch presents Verbal Burlesque’. This alone is a questionable title. Expect sardonic spoken word and overtly dramatic performance. This is a seated occasion, with a maximum of 50 people in attendance. According to a Facebook event page, the line-up should be Slow Knife at 20:00, Louise Woodcock at 21:15 and Lydia Lunch topping the bill at 22:00. This was not the case. Instead, Louise Woodcock is first up from around 20:30, then Lydia Lunch from 21:15, with Slow Knife topping the bill from 22:00 onwards. I assume this is true to Lunch’s don’t-give-a-fuck attitude that she has become synonymous with. I assume that Lunch doesn’t care for set-times, whatever happens on the night is fine.

Louise Woodcock
This is the first time I’ve knowingly seen Louise Woodcock perform. However, her face is instantly recognisable as the person I previously knew as, ‘Pink person who was carried on stage’ during This Is Not This Heat’s performance at Transformer Festival in 2017.

Woodcock started her spoken-word set by telling the audience about how she’s making an effort to be more of a ‘cunt’. She relates her new personality as retaliation to all the ‘cunts’ she’s known and will ever know. Aside from vaginal personality traits, Woodcock also talks about the spirit world and past lives. She claims much of her anger to come from a lasting rivalry in which she claims to have killed her own grandfather multiple times. Woodcock’s performance is darkly humorous, and bizarrely commanding. The don’t-give-a-fuck attitude of Lunch is an obvious mutuality between the two artists.

Lydia Lunch
The Kings Arms theatre room is the perfect setting for a Lydia Lunch performance. The ornate ceiling compliments the all-black, gothic demeanour of Lunch. The small and dimly lit room, filled with only 50 people makes for an intimate show. Lunch starts her set by complimenting Manchester (which a pedantic punter is quick to correct with ‘Salford’).

The last time I saw Lunch perform was at The White Hotel, where she covered the songs of Alan Vega and Suicide (reviewed here by Phil Newall). I often find that Lunch’s name is only ever mentioned alongside male counterparts, with Lunch often playing a sidekick role or that of a ‘muse’. I myself am guilty of this, I only really knew of her name from the time she spent with Rowland S Howard. But tonight she stands alone. Centre stage in her own curated event. Gone are days when she shared the stage with drunk cowboy junkies. She stands with no band, only two microphones and her own voice.

Her set is both vitriolic and reflective. She uses her raspy New York snarl to attack princes, politicians, and figureheads, all of whom are intwined with sex trafficking and are ‘conveniently found hanged in their prison cells’. Lunch wants the abused to fight back, ‘hashtag MeToo; hashtag You’re Next’, she decries. She goes on to talk about past lovers and relationships, many of whom have attempted suicide. Lunch, dressed in all-black claims she always wanted to be a widow. Perhaps she could still fall in love with a ghost. Lunch also makes points about mortality and the essence of time. She pays homage Bowie when atonally singing sections of Time and Five Years. Then mocks him by saying, ‘fuck it, he’s dead and I’m not’. Lunch will forever dedicate whatever time she has left to self-expression and influence.

Her delivery is rattled out, almost a homage to Salford born, John Cooper Clarke. The intensity of the words as they are thrown across the room leave a powerful impression on a minute audience. Lunch then introduces Slow Knife and the band are quick to set up and get going.

Slow Knife
Moving from the bottom to the top of the bill in a matter of hours, we have Slow Knife. Slow Knife are a band I’ve previously covered when they opened for Teeth of the Sea (here). After seeing Slow Knife that night, I was eager to see them again. Their live show is enchanting and bizarre. I feel Slow Knife are the only band that would’ve suited the style of Verbal Burlesque, and it worked perfectly. The lineup sees the mainman of Mold, Shane Dickinson, on bass. Eleanor Battle continues with Harmonium/Theremin/Synth. Alex Cook is on saxophone, sampler and an occasional rachet. Alex Cook on drums. Finally, Daniel Tasker, who last time wore a suit, now stands svelte and shirtless. A Venetian mask obscures his face. The set is short (Possibly down to a faulty sampler), but the quality of the performance is maintained. Slow Knife play to a smaller crowd than both Woodcock and Lunch, as it seems many only came for the star attraction. Again, this does not perturb the performance. Slow Knife could play to 10 or 10,000 people and their set would still be uncompromising and mystifying. Tasker’s overly enunciated words, speak-singing while reading from a lyric sheet, reminds me of Mark E Smith but does not fall into imitation. ‘Thank you all for a spell-binding night’ he declares as the band finish up.

This night was unique. It’s the sort of night local promoter Fat Out regularly present. I’ve never been to a spoken-word night before, but I would implore anyone else to go to one at some point. Lunch takes her spoken-word performance to London on the 14th and Amsterdam on the 17th.

Photo provided by Phil King. More photos by Phil can be found on his Flickr.