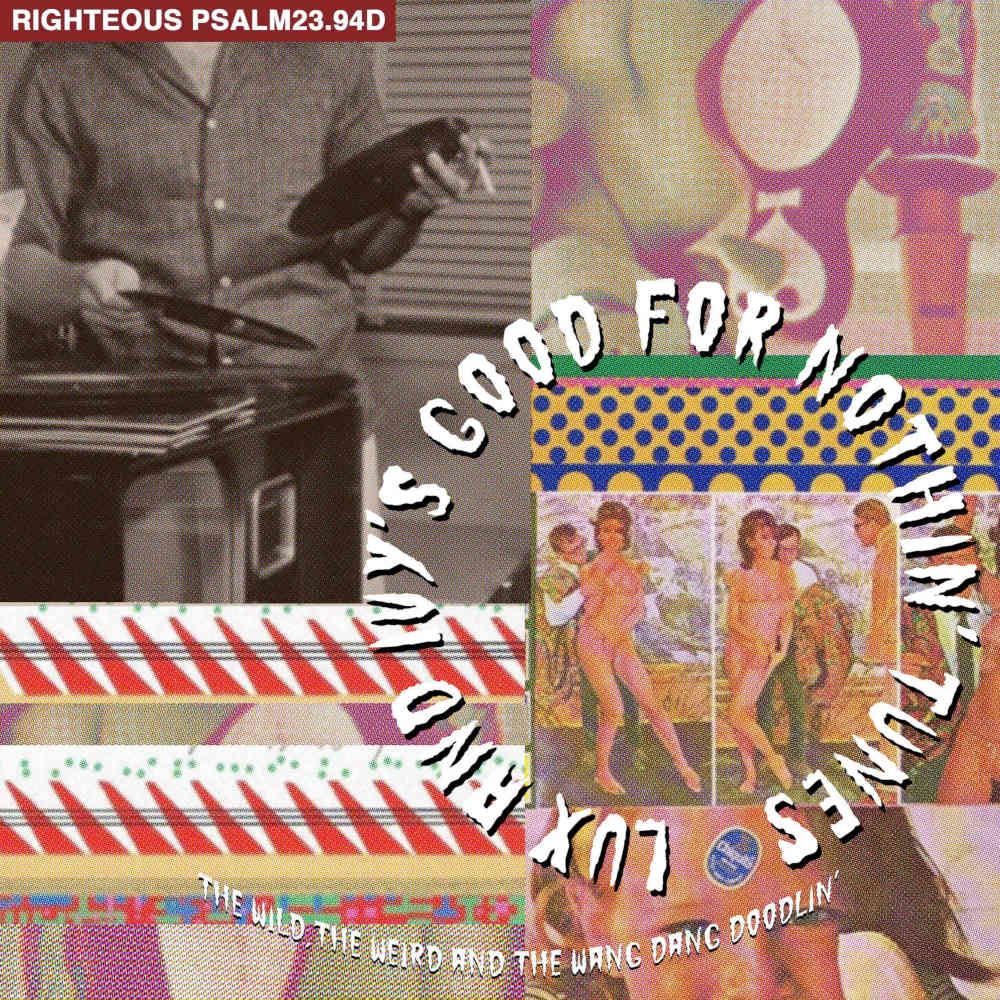 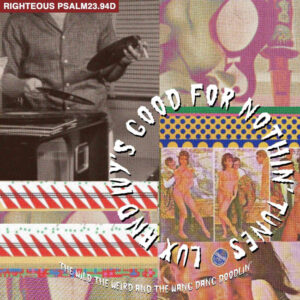 This 2CD compilation may well gain first prize as the longest titled album this year, its release also extends the long running USP of being in some way linked to The Cramps, but specifically the fabled record collection of Lux and Ivy; this is an arena that has been well serviced over the years by the wonderful ‘Born Bad’ series, the ‘Songs The Cramps Taught Us’ releases and also by the infamous ‘Purple Knif’ and ‘Vip Vop Tapes’, the later of which were actually put together by Lux for a radio show.

‘Good For Nothin’ Tunes’ contains 50 tracks “enthused over by Lux and Ivy”, with sleeve notes by Dave Henderson from Mojo Magazine; quite how we know these tracks were actually enthused over by either Lux or Ivy remains a mystery; Lux has been gone for over 10yrs, and Ivy almost immediately became somewhat reclusive; so whilst actually approval from The Cramps legends is largely missing, I think we can be sure that had they heard them, they would most definitely have liked them.

“If the boogie-woogie kills me, I don’t mind dyin” hollers Tender Slim during his rockin blues opener “Don’t Cut Out On Me”, originally released as a double A-side in 1962, though was re-issued as a bootleg green vinyl 7” in 2015, Slim hailed from South Carolina and went under an array of similar names including Fender ‘Guitar’ Slim, Tender Joe Richardson, however by 2007 he was known as Deacon Richardson and releasing material entitled “We’re Still on This Mission Praising God” which suggests he’d long given up on hellfire rockabilly!

Dave Hill was the stage name of actor David Hess, who in 1956 recorded the original version of the Otis Blackwell composition “All Shook Up”, Hill provided a solid vocal delivery whilst Ray Ellis And His Orchestra delivered the driving music which was released via the Aladdin label on a 10” shellac disc (a decent copy of which would set you back at least £50) the following year the track became a worldwide #1 hit for Elvis Presley. 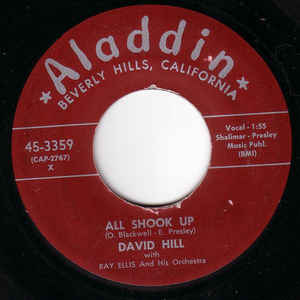 Witchcraft is always a popular theme of these compilations, this one is no different; we get Betty Lavette’ ‘Witchcraft In The Air’, a standard soul voiced stomper, Lavette had a lengthy recording career, much of her material has been subject to CD reissue on labels including Charly Records, Eartha Kitt dabbled with the spooks during ‘I’d Rather Be Burned As A Witch’ which came out in 1959 and cemented her status as the foil to the girl-next-door charms of Doris Day.

Bobby Bare’ ‘Vampira’ is pure 50’s sexploitation set to a swing beat which includes a raunchy almost spoken word fade out, a real highlight is ‘Slave Girl’ by Ray Ethier; Ethier remains a complete unknown on the rockabilly scene despite him being lead guitarist for Ben Hewitt, he also recorded this on 7” under his own name; it’s an absolute belter, twanging guitar, slap bass and reminded me of Glen Glenn. Sadly, matters of the heart intervened, Ray fell in love with a lady by the name of Patricia June and married her. Pat telling Ray that is was either her or the guitar… he chose her!

J.J. Jackson & The Jackels provide plenty of “ooh-ahh” chanting during this hump-dancer soul tinged classic, that has recently been released by Norton Records and was included on the 2009 compilation ‘The Roots Of The Cramps’ which at least provides a genuine Lux & Ivy related link.

The Poets ‘Dead’ is a genuinely strange record, a seriously twisted doo-wop vibe complete with horror lyrics and accompanying screams and lupine howls that no doubt terrified audiences in 1959; this is a cleaned-up recording, an original of which would set you back at least £20.

Scott Engel provided this album title with his 1958 B-side to his ‘Kathleen’ single, his label clearly liked the track as they again put it on the B-side of the following years ‘Livin End’ 7”, why if they liked it so much didn’t they flip it to the A-side… I guess it matters not as a few years later Engel would change his name to Scott Walker and moved to the UK as The Walker Brothers sought success from this classic rockabilly belter to the 2014 Walker written album with Sunn O))) is one hell of a journey!!

Ronnie Dee Dawson began his recording career with ‘Action Packed’ a pure rockabilly scorcher in 1959 when he was just 20yrs old, he had however been a French horn player for his father’s dance band The Manhattan Merrymakers, quite where he picked up the middle name Dee is a mystery, he was christened Ronnie Monroe Dawson and also recorded as Snake Munroe, and The Blonde Bomber, he benefitted from the 80’s rockabilly revival and continued to tour up until his death in 2003 age just 64. 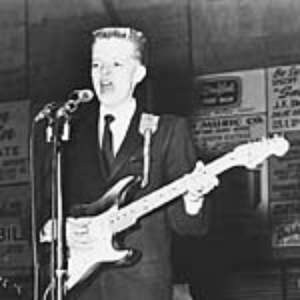 The Savoys ‘Domino’ was originally titled ‘Domino (Just For Kicks)’ and came out in summer 1959, the source clearly being Roy Orbison’s ‘Domino’ which predated it by 3yrs, these days a lawsuit would follow, how times have changed; no matter how long the world keeps spinning there is unlikely to be a track as odd as ‘Bernice (Part 1)’ by Brother Theodore, a true out there spoken word oddity, sonorous Germanic voice delivering a stream of consciousness monologue with ham B-movie scary sounds.

Disc 2 contains gems from The Del-Tones, who’s ‘Knees Shakin’ is a sultry guitar instrumental with some neat boogie-woogie piano, whilst Richie Deran ‘Girl And A Hot Rod’ is a genuine rockabilly belter as our boy believes he can satisfy his teenage angst with as the title proclaims a “girl and a hot rod” – originally released on the Pontiac label in 1960, this was Deran’s only release which is a real shame as this is the perfect blend of snare heavy rock ’n’ roll and youthfully yelped rockabilly. 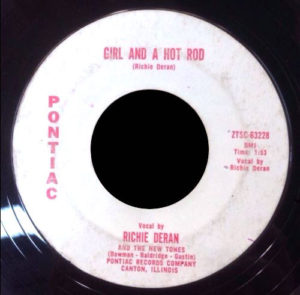 Its back to the weird stuff with Glenn And Christy, their sole release being ‘Wombat Twist’ which came out on Sonic Records label in 1962, the label was based in LaGrange, Illinois though there is no information as to where either Glenn And Christy came from or even who they were; for reasons best known to them they delivered a sort of spoken word lyric over a damn fine rockin groove that features some neat guitar work.

For the really way out there stuff, few come close to Jack Paar; his track ‘Blue Wiggle’ defies description and to be polite would be described as a novelty record, the track was originally a B-side released via RCA Victor in 1958. Paar was a former radio and TV talk show host who is probably best known for being the second host of The Tonight Show. During his earlier days Paar worked at WGAR in Cleveland. By chance, he was working the night Orson Welles did his infamous War of the Worlds broadcast. Paar apparently even tried to calm down the panicked listeners by saying, “The world is not coming to an end. Trust me. When have I ever lied to you?” The A-side ‘Funny What You Learn From Women’ as also included and is equally odd as we hear Paar accompanied by a whistler detailing what he learnt from the fairer sex!

Hasil Adkins should be familiar to anyone with even a mild interest in both The Cramps and obscure primitive rock ‘n’ roll, Adkins was a self-taught one-man band. The reason for this was because when he first heard Hank Williams on the radio he didn’t know there was a band behind Hank, he mistakenly thought that Hank Williams played all the instruments, and set out to do the same; he is featured here with his debut 7” ‘She Mine’ which was credited to Hasil Adkins & His Happy Guitar when released in 1962.

The Revels ‘Dead Man’s Stroll’ appeared on the earlier Righteous “Magnificent: 62 Classics From The Cramps’ Insane Collection” so quite why its needs another outing I’m unsure.
Dave Gardner was an interesting character, he flunked out of university after a single term of input as a Baptist Minister, before becoming a comedian, though this was curtailed when arrested for dope possession and later tax evasion, some of these wilder traits are evident on his ‘Mad Witch’ single from 1957.

Charlie Feathers should also be familiar to Cramps followers, and on ‘Tongue Tied Jill’ he described said lady as “my real gone chick” on this mono recording from 1956, a genuine barn yard nascent rockabilly blast with all the appropriate yelps and hollers.

Milton Feher closes the album with ‘Walking Without Effort’ a track lifted from an album ‘Relaxing Body And Mind: The Relaxation Record’ which came out in 1962, and was marketed as a therapeutic record; Feher without any musical accompaniment narrates advice on life, love and beyond; the album came out on Folkways Records, a label that became one of the worlds largest independent labels, and is currently owned by The Smithsonian Institute. As one of the terms of that deal, the Smithsonian agreed to keep all titles in print, which they continue to do to this day under the Smithsonian Folkways banner, as such you can get a new CD of the album for under £10!! 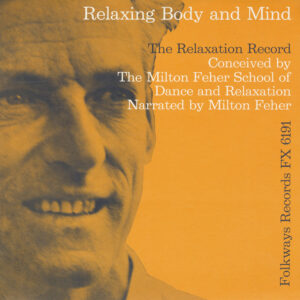 In total you get 50 slices of madcap vinyl that includes rare B-sides, introductions to dance crazes you had never heard of, and general madness, all of which has been sourced from the best available originals then subtly remastered, its a great compilation that showcases the driven and possibly unhinged belief of some of the artists and labels that released this stuff; there is genuine passion, blood, sweat and other dubious substances within the majority of these recordings, and for that reason alone this collection should be applauded, and lets hope we have now exhausted the Cramps tie in and similar tracks are just released for their own sake in the future.