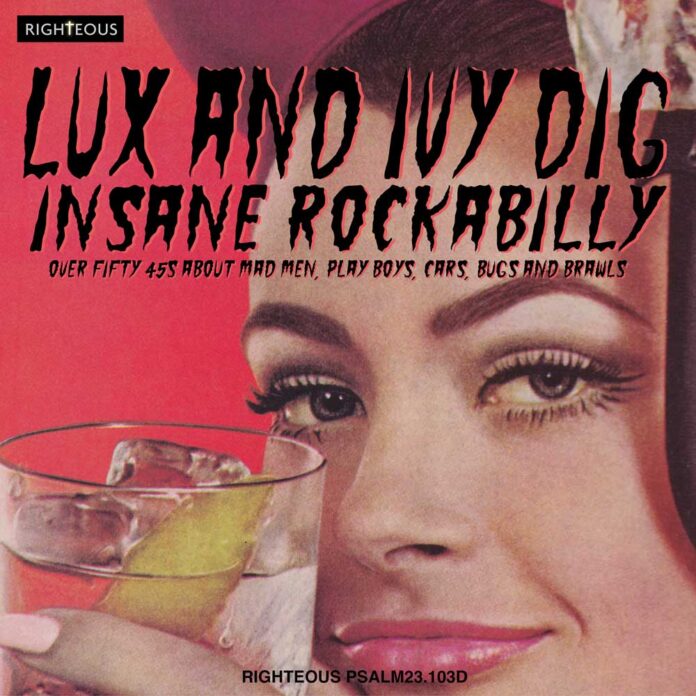 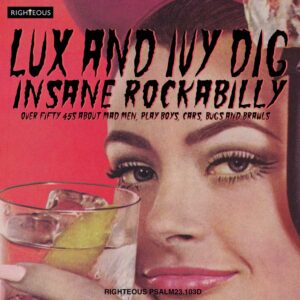 Another in the ongoing ‘Lux and Ivy’ series from Righteous, this one follows on from Pure Exotica, a 2CD set that explored that, and oft misunderstood genre. With Insane Rockabilly we are back on more familiar ground, as Mojo contributor Dave Henderson has pulled together over fifty largely obscure rockabilly belters, no hit wonders and at least one familiar name as they hammer out revved up tunes about cars, drag racing, backseat loving, unwanted attention from billy club wielding cops in an effort to stop the kids as they thunder down the highway to another wigged out party.

Opening, appropriately with Alden Lee’s Blast Off which was released in Germany in 1959 via the Dee Jay Jamboree label, Alden also went by the name Shorty Lee and fronted an outfit called Prairie Ramblers. He was 34 when Blast Off came out, the picture adorning the sleeve shows a heavy set bloke (who had clearly had a long walk to his one room schoolhouse!) cradling a double necked guitar that is brought to the fore in this drum pounding rockabilly stomp with some doo wop harmonies thrown in for good measure as Alden invites his paramour in to space for some ‘love with me” whilst Charlie Ryan and The Livingston Bros offer up ‘Hot Rod Lincoln’ a news report style vocal (a la C W McCall’s ‘Convoy’) over a souped up rocker as Charlie gets banged up for out gunning a Cadillac. This one breaks the obscurity ceiling as it was later covered in 1972 by Commander Cody And His Lost Planet Airmen who took the track into the US charts.

Carl Perkins is a bona fide legend so it seems at odds he is included in this collection, however his material is pure rockabilly, he appears here with Pink Pedal Pushers; this one came out on Columbia Records in the latter half of 1959, his second release for the label after departing Sun Records, a slap bass driven number that features the readily identifiable Perkins whoops and hollers, though this just pales before the genius of Chicken Rock courtesy of Fat Daddy Holmes – sadly his only release, a decent original copy will set you back at least £40, worth every penny for this rooster featured pre-surf rock instrumental guitar flamer; think of the breakdown for Shortnin’ Bread, stretch it out over 129 seconds and hurl in some neat guitar. Dig out the flipside Where You Is? which would rightly antagonise the #reclaimthestreets movement as Holmes invites some poor unsuspecting lady to come up and see “your Big Fat Daddy” in a voice your local sex pest would be proud of!

Other stand outs include Jimmy Edwards Love Bug Crawl which has some guitar that Poison Ivy herself would be proud of, whilst its good to hear the strong vocals of one Joyce Green included here with Black Cadillac which was the flip side of her sole release entitles Tomorrow which appeared on Vaden Records in 1959, whilst Rudy ‘Tutti’ Grayzell implored you to Lets Get Wild in 1957, a breakneck rush of rockabilly guitar and doo-wop backing vocals that can command in excess of £50 to get your hands on a decent copy.

Anyone know what a Wampus Cat is? Howard Chandler introduced us to such a title on this primitive billy-gem, apparently is an American folklore cat like creature that also goes under the title of Woolly Bully. The Collins Kids are here under their full name with their distinctive Whistle Bait with its heavy use of reverb to counter the juvenile yelps, the distortion is ramped up for the opening riff of I’m A Madman as Jimmy Murphy expresses his jealousy when he takes his lady out on a date. All should be familiar with Nat County & The Braves Woodpecker Rock, this has appeared on dozens of these compilations – how this was the only title credited to Nat County is beyond me, surely someone else wanted to hear more of his animal impressions?

Disc Two is packed with an equal number of rare cuts, opening with Did We Have A Party? From Billy Brown who apparently bought his first guitar aged just 8, he served in the US Army then returned to take up the guitar; sadly sales weren’t great and were confined to the US and Canada, equally rare is Art Adams Dancing Doll, the B-side of his 1960 7” She Don’t Live Here No More – these trade hand for £250+ though it was reissued back in 2018, another slab that will cost you a tidy packet is Petrified from Ronnie Self – this is a bona fide rockabilly gem, its primitive, you can almost hear the corn ears being spat out in amongst the other bizarre vocal yelps and comments. Both The Hi-Liters and Milton Allen off up dance craze belters that power along courtesy of some frantic boogie woogie piano, whilst Sonny Cole warns of the Curfew Cops over a slowed down piano ramble as he gets pulled over – cars feature on both the bizarrely named Sonny Sheets who straight to the point offers up Wheels, and Sammy Masters introduces Pink Cadillac with a “red light, green light… Go!” as he heads to the showroom. Really strange is Curtis Gordon who sounds like he recorded Draggin underwater, the track fades in and out but really captures the essence of much of this time period – thousands of chancers discovering rock ‘n’ roll and laying down their best efforts at two-bit studios on equipment that should have been condemned upon manufacture!

Bobby Crown & The Kapers also went by the name Bobby Lumpkin & The Kapers (I wonder why they changed) are here with the magnificent One-Way Ticket, the bands 1959 debut which came out courtesy of Felco Records who also released the oddly titled Cha Wailey Routa by The Saucers which is a very odd record. Bip Bop Boom is essentially a Little Richard rip off, but the fact it was recorded by the wonderful named Mickey Hawks With Moon Mullins And His Night Raiders warrants its entry alone.

Wally Hughes released Convertible Car on Ember Records in 1957, a fairly no remarkable track, though it was on the flip of Pug Nose And Pony Tail, a term of affection any young lady would no doubt cherish, this is the best trach Wally ever did, complete with whistling and vocal hollering.

Once again Righteous have trawled the depths of rock and rolls darkest recesses; these compilations are glorious snapshots of a forgotten period, a time when recording was cheap, manufacturing was equally cheap and there was a ready audience all looking round for something shiny and new, as such the outpouring of these artists is to be commended and we should welcome their availability once again.