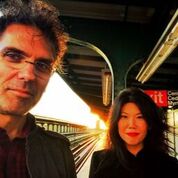 Lusterlit are New Yorkers Susan Hwang and Charlie Nieland and they are part of the Bushwick Book Club in Brooklyn. The BBC is a rotating group of songwriters and performers of all kinds and was founded by Hwang in 2009. They put on regular shows and feature new music, art and snacks (!) inspired by a chosen work of literature. Having released some music since Nieland joined in 2013, both Hwang and Nieland decided to form Lusterlit to perform and release the book-inspired songs they create.

List of Equipment is Lusterlit’s first EP and it brings together five songs inspired by THE most idiosyncratic choice of books; Mastering the Art of French Cooking by Julia Child; Blood Meridian by Cormac McCarthy; The Fortess of Solitude by Jonathan Lethem and The Day of the Triffids by John Wyndham.

The opener, Ceremony, is inspired by Blood Meridian. It is a slow burning country inspired slide guitar epic that builds and builds to a big sound that is gorgeously sung by Hwang. It manages to take the listener on several different journeys during its 5.48 minute duration. Once the instrumentation takes over from the vocals, the drama really starts and is heightened with its gradual volume and beautiful chord changes that again build and build to an almost crescendo end.
https://lusterlit.bandcamp.com/track/ceremony-inspired-by-blood-meridian-by-cormac-mccarthy

Title track List of Equipment, inspired by Mastering the Art of French Cooking, is a complete contrast to the opener with its infectious guitar riff, bombastic rhythm and Hwang’s laid back vocal delivery.

The Day of the Triffids has a deep throb with suitably menacing percussion and vocals of Nieland, albeit with gorgeous harmonies from Hwang. The lyrics are a literal interpretation of the titular book and the track’s creep and dread represent the book and UK TV adaptation perfectly. The almost tribal beats build and build combining with the vocals to a nice crescendo. Great song.

Flight has The Fortess of Solitude as it’s stimulus. It  is upbeat, funky and again has the gorgeous vocal overlays of Nieland and Hwang, with the latter’s vocal range absolutely shining through on this track. Just really lovely stuff.

Final track Genius of Love  which is also inspired by The Fortress of Solitude, is a strange and idiosyncratic affair with the pair singing about ‘Superman’. The poppiness reminded me of Erasure and even though it’s probably the weakest song on the EP, it’s still much better than a lot of mainstream pap out now.

The whole EP is playful and is played with no agenda and is inspired by the most disparate and original of sources and influences. As songwriters it must be such a liberating experience and this shows in the five tracks offered here.

I look forward to hearing more from Lusterlit and their clever use of musical inspiration, combined with their obvious musical talent. Nice.