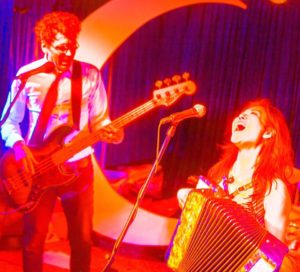 I’ve been a fan of Lusterlit for a while now since reviewing their past releases here and here. This month sees the release of a remarkable remix of Flight which was on their List Of Equipment EP. The original track is inspired by Fortress Of Solitude by Jonathan Lethem and the band have remixed it and made it into an electronic dancefloor gem.

Vocoder heavy effected vocals start the track and are toyed with throughout the 4 minutes plus. A sexy funky beat soon morphs into a thick crunchy and distorted throbbing bass that quickly shifts the single up a gear.

The midway breakdown mangles and destroys the vocals and changes the whole dynamic of the track into a feisty and raunchy pop song. Smooth and seductive, one of my favourite tracks off the List Of Equipment EP has been taken and transformed by insanely danceable beats and surely one that needs to be in every indie disco around the country.

The accompanying video has also had the remix treatment with the original images overlayed with glitchy distorted effects and mindbending visuals. Flight (Remix) is also part of a limited edition run of 7″ singles. Download this track now and add it to your playlist. Joyous stuff.