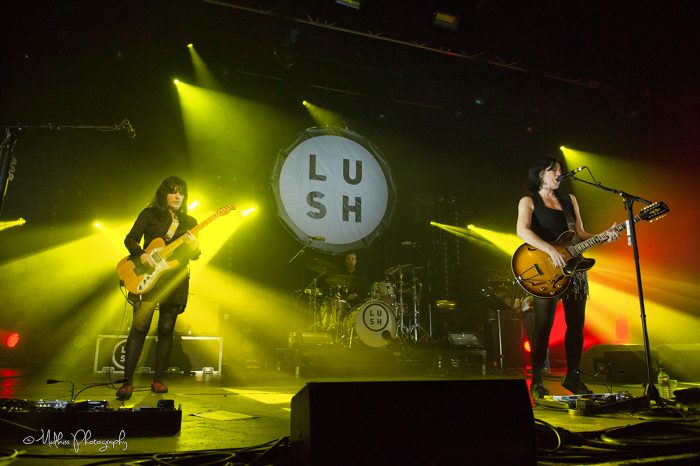 As Lush took to the stage at Manchester Academy and hung up their instruments for the final time, it really did feel like a spectacular curtain call for a band who are still celebrated (though not by their own admission) as the seminal Shoe-gazers of their era. For fans of Lush, it may have seemed unusual if not slightly dis-heartening that the band had decided to end such a long-awaited comeback in Manchester rather than London, but front-women Emma Anderson and Miki Berenyi have never been a pair that adhere to expectation. Abi Small (words) and Melanie Smith (photos) went along to capture the final performance ever from Lush. 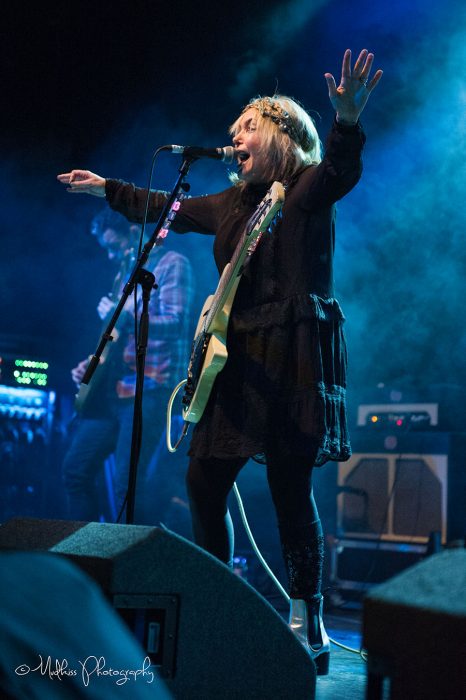 Brix Smith-Start’s aptly named new outfit, ‘Brix & The Extricated’, which consists almost exclusively of ex-members of The Fall including the Hanley brothers and Steve Trafford, as well as guitarist Jason Brown, provided support on the night and were perfectly at home in Manchester. Playing a mixed set which saw Fall classics ‘Totally Wired’ and ‘Big New Prinz’, receiving as fervent a reception as the band’s brand new tracks, it seemed that little had changed since the late 1980’s with the effortless symbiosis of the Hanley brothers perfectly complementing Brix’s venom-barbed vocals as the raw energy of the performance prepared the audience for the main event.

Opening with ‘De-Luxe’, It was immediately clear that Lush hadn’t lost their essence, as the ethereal vocal melodies and delightfully transient guitars that typified the band’s early career reverberated through the venue as though the sound waves themselves were transporting the crowd back to 1990. From the outset, the atmosphere was saturated with nostalgic longings and Manchester Academy took on an almost ecclesiastical significance as fans congregated to eulogize Lush- a band who exemplified the sound of Shoegaze for so many. Despite Lush’s fierce refutal of the term for most of their career, Miki herself announced that although ‘Shoegaze used to be synonymous for wanker, we’ve reclaimed it!’, to the sound of rapturous cheers and applause from the crowd; despite the etymological resonances of the term, all eyes were firmly fixed on the band. The spirit of reclamation seemed to encapsulate the evening perfectly, as Lush’s reunion has not been a woeful lament of times gone by, but a spectacular re-birth as old and new tracks blended seamlessly together, with the dreamy transcendence of ‘Out of Control’ from the new EP ‘Blind Spot’ sounding fresh, yet firmly rooted in Lush’s distinctively nebulous sound. 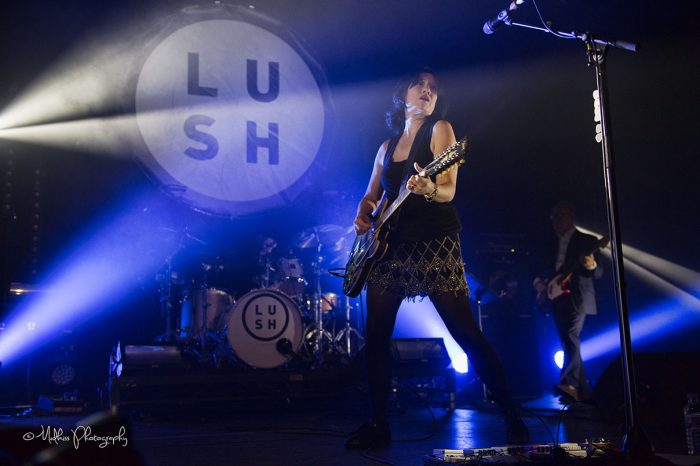 Aside from the new record, there was no escaping the fact that other things had inevitably changed in the twenty years since Lush’s departure from the world of music; there was no red hair in sight, Elastica’s Justin Welch had taken on drumming duties in a gesture of friendship to the the late Chris Acland and Modern English’s Michael Conroy stood in for Phil King who had decided to bow out of the tour early. Miki Berenyi noted the change in lineup as she playfully jibed, ‘you might have noticed Phil’s got shorter, and blonder, and better at playing the bass…sorry!’, and the insistence of Conroy’ s bass throughout the set only added to the quality of Lush’s live sound

In a set that paid tribute to the entire span of Lush’s career, despite the changes that have taken place both within the microcosm of the band itself and in the wider world of the music industry, they delivered a supremely otherworldly performance, finishing with a double encore that ended with ‘Monochrome’, the final track from their 1992 album Spooky. Though Lush saw their musical fate sealed by a bittersweet tragedy that stole not only their friend and drummer Chris Acland, but also the opportunity to close the curtain on their colourful career, Lush’s last ever gig presented itself as a chance to wave an emotional, yet exultant goodbye to a band who still mean so much, to so many.

All words by Abi Small. This is Abi’s first piece for Louder Than War.