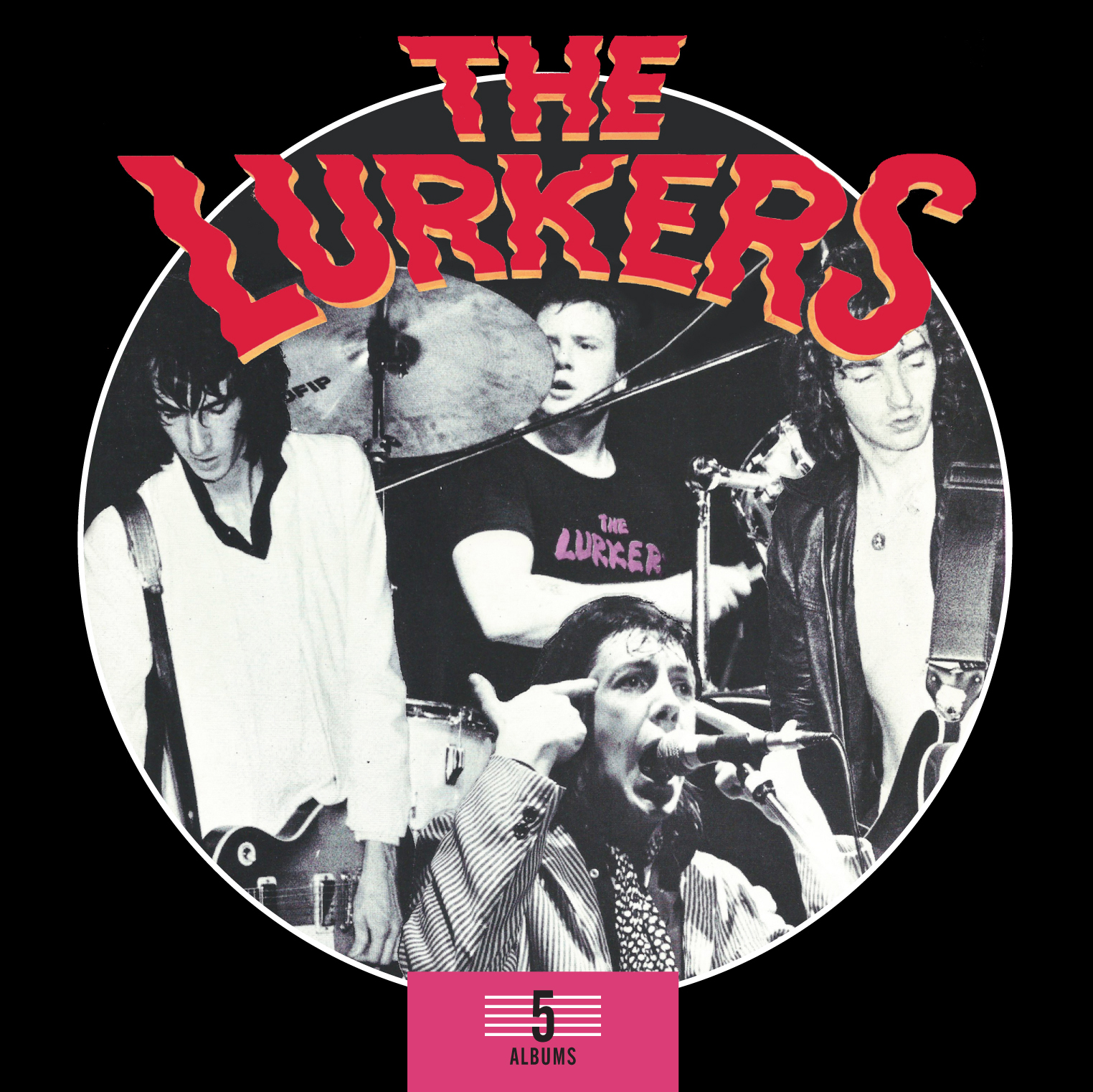 It would be overstating the case to claim that The Lurkers occupy more than a place on the margins of punk history, but it’s an important one none the less.

Formed in West London in 1976, they were a ubiquitous presence in the first wave of UK punk, slotting seamlessly into a landscape occupied by the likes of 999, The Boys, Eater, London, The Prefects and Johnny Moped, their debut single Shadow becoming the inaugural release on Beggars Banquet in July1977.

Like their peers, rock history has not been kind to The Lurkers. In football terms (and in idle moments I’ve often wanted to translate the UK punk bands into four divisions), they are perhaps Leyton Orient: determinedly lower-league, their aspirations to break into a higher division eternally thwarted by a lack of real drive, ambition or (let’s be blunt) talent. Yet in terms of their sound, you can argue that The Lurkers, along with their contemporaries Sham 69 and the UK Subs, the quintessential British punk band.

When we think of punk 40 years on, we hear the template of an amphetamine-crazed ‘ramalamalamalam’ of buzzsaw guitars, the merciless thrashing of drums at breakneck speed, and the bellowing of crudely-rhyming couplets by an angry bloke with a hoarse voice. The Lurkers ticked all those boxes. They were tremendous fun live at the time, with their simple sloganeering choruses, even simpler two-chord structures, and occasional suggestions of melody. No matter than most of their songs struggled for much of a tune: the words were simple enough that you could shout along to the chorus. And that was more than enough to endear them to a generation disillusioned with the overblown virtuosity and conceptual delusions of the Prog dinosaurs who ruled the airwaves.

The Lurkers were nothing if not authentic. They began life in the prescribed fashion for a punk band in 1976, inspired by The Ramones, whose iconoclastic debut album arrived in April that year, followed three months later by the landmark Roundhouse gigs with The Flamin’ Groovies that kick-started UK punk. They rehearsed alongside fellow travellers like Generation X in the basement beneath the independent record store Beggars Banquet in Fulham and became the first signings to the shop’s label – one of the first independents along with Chiswick and Stiff.

Major labels were not exactly falling over themselves to sign punk bands, who were reviled in the tabloid press and viewed with suspicion by the music industry. It was not until October 1976 that the first British punk single (New Rose by The Damned) was released, on newly-formed indie label Stiff Records; The first major-label release, The Sex Pistols’ Anarchy In The UK, arrived on EMI a month later.

Without a record deal, The Lurkers decided to do it themselves. “There were no small independent record companies so we worked out how to put a record out ourselves,” recalls Martin Mills, who founded the Beggars Banquet label. “It was a lot of fun and a piece of cake, to be honest, because there were so few punk singles around that everyone bought everything there was. There was this completely captive market.”

Listening to them now, on the 40th Anniversary box set released by Beggars Arkive, it’s easy to see why the music press quickly dubbed The Lurkers “England’s answer to The Ramones”. Both played high-speed two-minute songs built around thunderous guitar riffs and both shared a similar love of 1960s bubblegum pop. But in The Lurkers you could also hear the influence of the music they’d grown up on in London – Slade, Sweet, T.Rex, Mud and Gary Glitter – Glam Rock bands whose influence is the most evident differential between the UK and US strands of punk.

Determinedly unfashionable, even within the narrow parameters of punk, The Lurkers wore they hair longish, occasionally sported white suits onstage, and were attracted by the ‘outcast’ aspect of punk as much as the primitive drive of the music. Singer Howard Wall, guitarist Pete Stride, bassist Arturo Bassick (replaced after the first two singles by Nigel Moore) and drummer Pete ‘Manic Esso’ Haynes enjoyed the perfect trajectory for a band if you are of the belief (as I am) that it’s best to disband before things go hopelessly wrong. History suggests that the optimum time for this is after the second, or sometimes third, album when conflicting egos drive most bands into different directions and combust.

For The Lurkers, this meant a series of great singles – some of which made the lower reaches of the chart and even led to appearances on Top of the Pops – and a handful of John Peel sessions, followed by a decent debut album and a disappointing follow-up. At which point they immediately disbanded, re-forming with a new vocalist (Pete ‘Plug’ Edwards) in 1982 and, after another album attributed only to Stride and Plain, breaking up again two years later. Since then, the band has continued in various forms, though you would be forgiven for not knowing it, and have little to lose for not hearing them.

This 5-CD box set, aimed at fans and completists, stretches a slender legacy of material fairly thin, and in keeping with the band’s bare-bones ethos it does not even contain a booklet, but its brief highlights justify its existence. It includes both albums; a disc of Singles & Demos (the latter being notable only for being even more badly recorded than the already poor quality of their early singles); a disc of the complete BBC Sessions; and the 1980 album New Guitars In Town made by Pete Stride and Howard Wall with ‘Honest’ John Plain and Jack Black of The Boys, punk contemporaries of The Lurkers with a slightly poppier bent, and – for those who might be interested – Mick Talbot of The Style Council on keyboards.

The early run of singles – Shadow, Freak Show, Ain’t Got A Clue, I Don’t Need To Tell Her and Just Thirteen (once included in Mojo magazine’s list of the best punk singles of all time) – stand the test of time, sounding as urgent and inspirational today as they did four decades ago, especially the even more primitive versions recorded for John Peel, who championed the band. Their choice of covers shows their roots: Bo Diddley’s Pills (filtered through The New York Dolls) and You’d Better Move On (ditto the Stones) and fans of a certain age will enjoy what was always a crowd-pleasing cover version of The Crystals’ Then He Kissed Me (via The Beach Boys), injected with amphetamine and fed through a blender on maximum power to become the politically incorrect Then I Kicked Her.

You can find The Lurkers online here

Written by Tim Cooper. You can read about more of Tim’s writing here