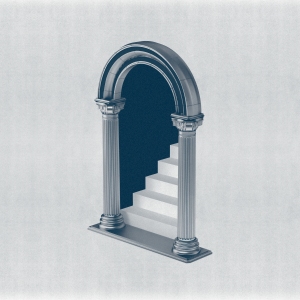 Born out of a series of rehearsals within East London’s All Saints Haggerton church and following on from their celebrated 2019 Boiler Room set, Lunch Money Life’s Immersion Chamber is the sound of a myriad disparate influences coalescing into a unified and impressive whole which follows in the footsteps of bands such as The Avalanches, Fold, DJ Shadow and AIM.

Immersion Chamber’s themes seem to focus on a sort of beauty that can be found in melancholy and introspection. There’s only a few moments where the band tip their gaze towards a dancefloor, like on the jazz soaked Living3000, but even then there is a sense of foreboding and unease within its scattershot rhythms and menacing synths and whilst overall the album doesn’t seem to dwell on the natural highs found in electronic music its sheer wealth of stylistic twists and turns keep you uplifted and progressing with a sense of continuous propulsion.

Listen to the way that Truth Serum struts forward starting with a sense of heavy foreboding before it starts to swing ever so wildly, or the dusky smoke-fulled jazz of opener God Complex which is one of the best audio interpretations of sunset this writer has ever heard as it manages to capture the beauty of dusk whilst not shying away from the knowledge that soon around us all will be dark..and then the fun can begin.

Immersion Chamber’s contradictions are its strongest asset and the band Stewart Hughes (drums) Sean Keating (guitar) Luke Mills-Pettigrew (bass) Jack Martin (electronics/trombone) Spencer Martin (electronics/saxophone) manage to balance the various musical and thematic threads wonderfully allowing each other to take centre stage at exactly the right time which shows us that there is apparently no ego within the band. There is certainly an echo of music created in the 90s which may have aided my sense of familiarity to the sound of Immersion Chamber but this is no bad thing as the band never once fall too far into the regressive and keep one toe in the future for the largest part of the albums running time.

A good album that warrants many a listen, Lunch Money Life have created a work that manages to fit within the currently thriving worlds of both Jazz and Electronica…I look forward to hearing where they go to next.