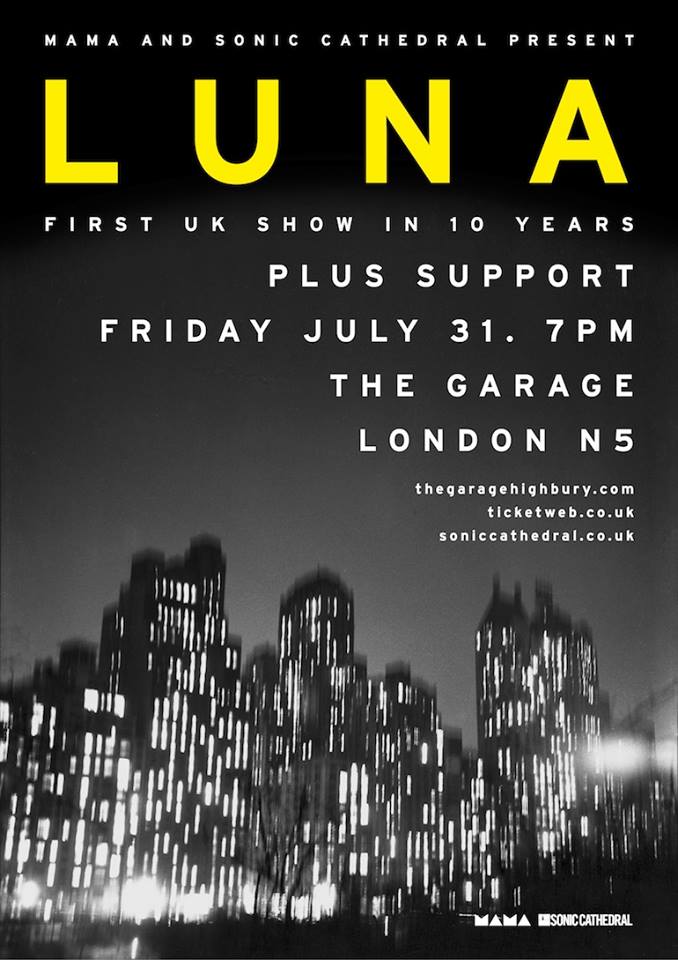 Luna first separated 10 years ago. Having spent the best part of 15 years criss crossing the US and the world, the band had finally grown weary of the rock’n’roll treadmill. Far from retreating into obscurity, Dean Wareham and Britta Phillips put out several duo albums and toured the world under the “Dean and Britta” moniker playing a soundtrack to Andy Warhol screen tests or revisiting Galaxy 500’s songbook. After a band reunion in LA last year with drummer Lee Wall and lead guitarist Sean Eden, a Spanish promoter set the ball rolling and the UK was lucky enough to get five dates on this reunion tour.

After two opening acts (I always find two opening acts a bit of a daunting prospect three hours of music can be a lot to take in after a long day at work) Luna started setting up their gear with the help of a couple of roadies. I had seen drummer Lee Wall chatting with some fans during the two opening acts. Dean Wareham looked like a cool Philosophy teacher with his horn-rimmed glasses and Britta Phillips’ ethereal presence radiated from the stage. Sean Eden took some pleasure bantering with Wareham in-between the songs, Wareham winning the contest by declaring Eden had been pleasured by a cleaning lady during one of their early tours.

The setlist included most of their well known songs. Chinatown was the second number of the night with its clever guitar interplay thrilling the audience. Malibu Love Nest from 2004’s swansong album Rendez-Vous was followed by Tiger Lily from their 1994 landmark LP Bewitched.

Luna’s songs are built on very few chords but Wareham has a knack for turning them into memorable tunes. Eden proved again what a great guitarist he is with his solo on 23 Minutes in Brussels. Phillips’ fluid bass playing and backing vocals and Wall’s steady drumming provided the perfect backdrop to the guitar pyrotechnics.

The setlists for each night of the UK tour look pretty varied so it shows the band are putting quite a bit of effort on pleasing their fans on this reunion tour. Wareham hasn’t promised a new album and doesn’t want the band to re-form on a permanent basis but he said he was quite keen to perform a series of gigs here and there, citing Tom Verlaine’s Television as an example. Further shows have been booked in the US where they will be playing Penthouse in its entirety and a vinyl boxset of their full discography will be released towards the end of this year.