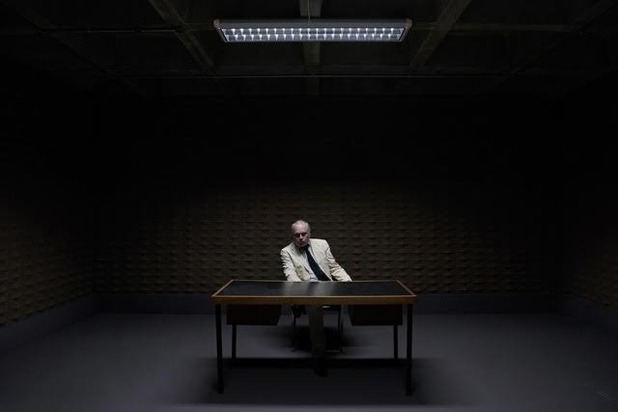 Luke Haines rocks Bush Hall with his new concept album and brings out the “hits” in an excellent acoustic set.

Luke Haines is back in his favourite London venue where he played last year to launch his “New York in the 70’s” LP coupled with a complete live rendition of the Baader Meinhof LP. Tonight againt a backdrop of props simulating the inside of a Data bunker, he’s presenting his latest offering “British Nuclear Bunkers”. However first on the bill were excellent London based London quartet Retoryka, the latest project of Kevin Retoryka, well crafted songs, good lyrics and no fancy rock’n’roll posturing and Kevin was sporting a set of tartan trousers that would have put to shame The Bay City Rollers. They have a new EP entitled “Super Maudlin” out on October the 30th… Haines took the stage dressed from head-to-toe in white overalls and wearing his customary “Rock’n Roll” glasses and launched into a full sonic assault with the help of a Nord keyboard and a modulator. The Power trio advertised on the bill was formed of a dancer dressed in the same attire as Haines who struck some artistic poses and of a Gorilla who despondently sat at the back of the stage looking puzzlingly at some sort of  pod. The tracks weren’t straight ahead copies of the recorded versions as there was quite a few extra vocals. Haines was enjoying himself tremendously saying several times that he was digging his “new direction”. An abrasive version of “Data centre” proved to be the highlight of the performance.

Taking a bow and thanking the audience, he came back two minutes later and picked-up his trusty Takamine acoustic guitar. Starting with “Upper Classes” from the Auteurs second LP “Now I’m A Cowboy”, he then moved to the rarely played “Walton Hop” from 2006’s “Off My Rocker At The Art School Bop” which game him the occasion to tell that the infamous Jonathan King was not a fan of the song. “Housebreaking” was followed by “Leeds United”, Luke’s “ode”  to  the north of England. We were then treated to a selection of tracks from his “Psychedelic Trilogy” with “Inside The Restless Mind Of Rollerball Rocco” and “Gorgeous George”. “Rock’n’Roll Animals In Space” enabled our host to state his musical preferences (with disclaimer that you had to take with a pinch of salt included). An encore including his affecting tribute to Lou Reed “Lou Reed, Lou Reed”, “Unsolved Child Murder” and “Future Generation” closed the show.