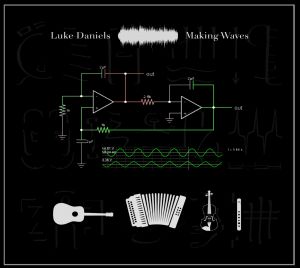 Possibly best known for his work with Irish folk angel Cara Dillon, Luke Daniels has of late been making tentative steps on a solo career. His latest album finds him ramping things up somewhat, taking a title for an album that fits the bill perfectly.

His most recent solo escapade involved the highly original Revolve & Rotate, blending modern technology with the clockwork polyphon machine yet with Making Waves, he returns to his roots with a new album and playing button accordion. But hold on there. He’s also gathered an impressive team of  Mike McGoldrick, John Doyle, Aidan O’Rourke on three quarters of the album, so you can rest assured that this impressive quartet are bound to come up with the goods.

Not only that, but over five hundred pieces of archived or sampled audio have been collected from online, including  performances from Scottish, Irish and American folk musicians of the last century, processed, detuned and layered to weave into the arrangements.

A few tracks in and you realise that Luke Daniels and the merry men are taking  folk into a genuinely different, world/otherworldly, musical  direction. The Jolly Tinker and  The Larks open up with a collection of disparate elements which wind their way back to a more recognisable folk sound, setting the tone for what’s to come.

The collection evolves via the familiar McGoldrick whistles and O’Rourke fiddle bound with electro beats and what are best described frankly as some  weird and wonderful interjections. Something like Jigs & Fixtures has a full on bout of jiggery folkery  yet comes sandwiched between a pair of tunes which conjure up images of a mad professor conducting various jazz influenced arrangements whilst tossing in vocal and sound samples.

It’s also well worth checking the YouTube channel for some very modern animations to some of the tracks from Making Waves. Rounding off the album, and perhaps to emphasis the fact that it’s his name on the cover, Luke finds time to  deliver the last two tunes solo. The contrast of the melancholy Wounded Hussair and the busy Cumberland Reel, which features all manner of goings on and trickery behind the main melody.

He might have travelled and olde worlde route on Revolve & Rotate but Making Waves shifts the goalposts yet again. It’s what he terms “continuous traditional music” and a hugely enjoyable and off kilter collection of experimentation. It finds Luke Daniels developing as a surprise package, earning a reputation as an innovative creator.

Luke Daniels can be found  online here. He is  also on Facebook and tweets as @lukedanielsfolk. His YouTube channel is here

All words by Mike Ainscoe. You can find more of Mike’s writing  on Louder Than War at his author’s archive. He can be found on Facebook and his website is www.michaelainscoephotography.co.uk