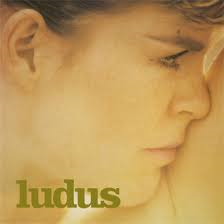 Career anthology of extraordinary Manchester Post Punk band Ludus, including four tracks from a rare Peel Session and a 1982 live set at the Hacienda….LTW’s Ian Canty looks at the singular path of a band pivotal to the development of North West Post Punk and all that happened afterwards……

It would be great if people were more aware of Linder Sterling, born in Liverpool, but who made a huge impact on the Manchester Post Punk scene. Here is a golden opportunity to find out more. She led her band Ludus from 1977 through to their adjournment in the mid-80s with great panache and was evidently a lucid and original thinker, even if sometimes the sound experiments she made with the band were not to everyone’s taste. But even if they weren’t, well after all wasn’t that part of the point, a need to unsettle the certainties that were beginning to show their hand even in Punk? A brilliant graphic artist who designed some wonderful collages that found their way into Buzzcock iconography (the “Orgasm Addict” sleeve being one that has gone down as her calling card) and with the same highly individual outlook she furnished the Ludus band with a unique style, both feminine and feminist, in turns playful and sweet but then tough as nails and uncompromising.

Ludus found themselves as the longest serving band on New Hormones as a result of Linder’s collaborations with the Buzzers and this gave a solid base for them to experiment without the need for worrying about sales figures and chart placings etc the kind of stuff that would stifled creativity in search of pound notes. She talked about real life, confronted the difficult subjects about human bodies and feelings that British reserve has told us all our lives to pretend that they just don’t happen. Grunts, groans, screams, laughter, all the non-verbal ways of communicating, all part of human life, all here presented as part of the musical landscape. Polite society blushed until it exploded.

People will tell you that the sound of Ludus is jarring, skittish, near-tuneless Post Punk…which for the vast majority of the time couldn’t be further from the truth. Yes there is a huge Jazz influence there and moments of anguish sure but they also made some very lovely and light sounds too. You had as much more chance of hearing a Bossa Nova beat than a squalling, disjointed stomp. We probably shouldn’t mention it here, given that we’re all meant to be Punky and cool and everything, but Linder actually had an appealing, pleasant voice and some of the skippy and light jazz offerings on here are a total delight. At times (like on the incredibly fast “Mother’s Hour” single and “She She” in particular) they even sound like a mutant Bow Wow Wow, all tribal polyrhythmic drumming, yelps and speeding basslines underpinning scat singing. Not far from the madding (and frequently maddening) crowd of the Pop scene of the time, but still too spicy for the faint hearts of chartland.

This new compilation shares both its name and sleeve photo with the Interior Music vinyl issue which was released in 1987, but this a huge enhancement and enlargement on that collection. This one has been put together with a great deal of care and attention and provides a deep overview of the Ludus journey from their inception as part of the thriving Manchester Post Punk scene. Splitting down into a one disc “best of” that includes their very earliest recording from 1978 “I Don’t Want To Go” which features Linder’s original co-conspirator Arthur Kadmon, right up to 2001 with Linder sparring with Kadmon’s replacement Ian Levene on “Recognition”, then disc two which comprises a rare Peel session plus a live set from the Hacienda in 1982 (when Linda wore her “meat dress” many, many years before Lady Ga Ga did likewise, though La Ga didn’t top the outfit off with a black dildo to my knowledge!), it really, finally does do them justice. The sound here even for the live set is superb, although you can’t really hear much audience response, but I suppose the denizens of the Hacienda was so cool they didn’t need to applaud!

Taking disc one first, it would be remiss of me not to highlight the incredible “My Cherry Is In The Sherry”. I’ll probably get told off for this, but for me this record is like the Post Punk version of the Pretty Things “Defecting Grey” in that it is a forgotten (well the Pretties one was for a while anyway) single that is just teeming with ideas and brilliance and encompasses wild changes of pace and style through the relatively short running time. In two minutes and thirty eight seconds “Cherry” has more invention stuffed into it than a lot of bands’ entire careers.

However this was far from being the only string to their bow, as the divine French Jazz Pop of “Nue au Soleil” and the expedition into Martin Denny-like Exotica “Rosa Luxemburg” proved. This is the key thing about Ludus: they could do pure pleasant Pop music, but that was too easy for them; they needed to challenge and provoke (at the extreme end of this, the very raw and sparse drums/laughing and screaming concoction “”Howling Comique”), as well as, or perhaps in order to, entertain. The aforementioned “I Don’t Want To Go” is a revelation of the genesis of the band, stuttering Rhythm and Blues guitar leading the band into some inspired Pub Rockin’ Punk, but a Bebop breakdown indicated the direction the band would take, or one of them anyway.

The Peel session is a case of extremes from the vibrant Post Punk of “Too Hot To Handle” which fits right into the same field the likes of the Au Pairs were tending at the same time, to the Squawking Skronk work-out “Convenant”. During the almost Trad Jazz of “Wrapped In Silence” Linder, in a stream of feminine consciousness, mentions a “(sugar and) spice girl” but this is a world away from toytown “Girl Power” being the real thing and not an ad man’s dream.

Caught live at the Hacienda Ludus benefit from a bouncy rhythm section and skittering guitar which adds a Funk tint to their sound – a pumping bass-line on “Breaking The Rules” even put me a little in mind of Chas and Dave’s “Gertcha”! In the course of the set it becomes clear that people were watching locally – for instance the sweeter, more pop side of Ludus must have had some influence on the work of the likes of Cath Carroll (who I’m given to understand was a good friend of Linder and one of the “crones” at this gig) and her band Miaow later on, but their most obvious children were Mid-80s Manc Mayhem merchants Big Flame, whose super-speed Funky Punky thrash was definitely pre-empted by Linder and Co’s successful efforts in that area.

I can’t pretend that Ludus or this collection will appeal to absolutely everyone – you will need to have at least a little adventurousness in your listening habits and an open mind – but if you persevere I can promise a stunning collection of one of Punk’s best but least rewarded talents and there are enough catchy numbers and odd pop tunes to keep the less committed interested too. Linder has concentrated far more on her art in recent years (bar a reunion with Ian Devine playing restructured Ludus songs at Morrissey’s Meltdown at the South Bank in 2004 which I’m still kicking myself for missing) but this brilliantly put together look back to her musical past makes us appreciate her contribution which was massive and maybe, just maybe, wish she would reactivate her Ludus for us just one more time….