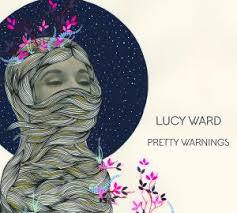 Derbyshire’s own Betty Beetroot, Lucy Ward is back to thrill the folk massif with her long awaited new work. Spoiler alert – it’s an absolute cracker.

How wonderful to see and hear Lucy Ward back making music again. It seems like a long time indeed since her last album, I Dreamt I Was A Bird, was released in October 2015 although some of her most magically intense and darker work was reserved for 2013’s  Single Flame. Some water has passed under the bridge in terms of life experience and anticipation is high. Can we expect the  fleeting delicacy of intimate acoustic moments? will there be hints of gothic darkness and ominous storm clouds on the horizon? and what’s she going to do with a traditional folk song or two…?

What’s guaranteed is the usual Lucy Ward mark of expressive engagement – she doesn’t just sing, she performs and lives the songs. Not that she’d need any encouragement from Stu Hanna, back in the producer’s chair once again and capturing what first impressions suggest that what we have on our hands here is not only a mature and worldly wise Lucy Ward but the makings of a landmark record.

Silver Morning opens Pretty Warnings in grand style. Stroking the parts tickled by Icarus and Summers That We Made, the  stripped back piano of Helga Ragnarsdottir provides the gentle touch as Lucy’s melancholic musings warm her words of fate and isolation. It’s a theme that continues with the ghostly Cold Caller that skips from the parched artistry of Radiohead to a psychedelic twenty first century Grace Slick on the edge of chilling. Visions of her  hammering on that green electric guitar that she occasionally straps on to vent some fury as she trances out with an increasingly frenetic  vocal of “I love you and I know you love me.” Wow, just two floppy eared  hops short of a white rabbit.

Sunshine Child follows, a close relative of the upcoming Lazy Day, its delicate acoustic wanderings are tempered with a minor key sadness yet rounds off an opening trio  of songs that dig deeply and set the bar impossibly high. Her roots may lie in the folk field so a mid album interlude  of traditional songs offers the chance to spot the join. Picking up on brooding tales of interesting characters to get her teeth into, the tragic ballad of Bill Norrie who kills his lady’s suspected lover to find he’s her son, is the album epic. Boldly unaccompanied in the first instance, it weaves almost seven minutes of hypnotic narrative where Maria Martin (many will know as Murder In The Red Barn, a folk rock version on the recent False Lights album) shifts the emphasis in portraying a bluesy bassy tale of doom with a sudden gust of strings adding a chill and some soul and a half.

The warning offered in Fair And Tender Ladies sits perfectly with her own words to a trad tune for Mari Fach – with plenty of aloney-o’s to add to the genteel folkiness – false lovers and taking heed of the darkness and dangers  of falling for the wrong man are again tempered by the homespun Lucy Ward penned songs that take the accolades as the set heads for the finish line with Lazy Girl. A track that  that forms a close partnership with Sunshine Child in the dreamy and graceful ease with which it flows on a bed of warm strings – a song that conjures up  the notion of idyllic perfection before we’re lulled  out with visions of brave majesty on an album  bursting  with  rich possibilities.

We’d used the word sublime to describe the superb work of Ben Savage and Hannah Sanders on their Awake album a few weeks back. Pretty Warnings is very much in the same bracket, taking up the gauntlet and delivering a transcendent and enthralling experience. Not a wasted note, not a dull moment. It’s not often you can say that.

You can watch a behind the scenes sneak peek of Pretty Warnings  here: