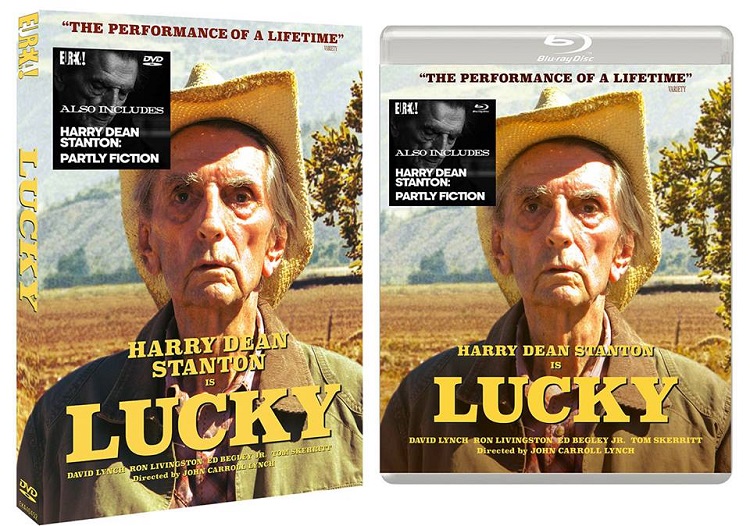 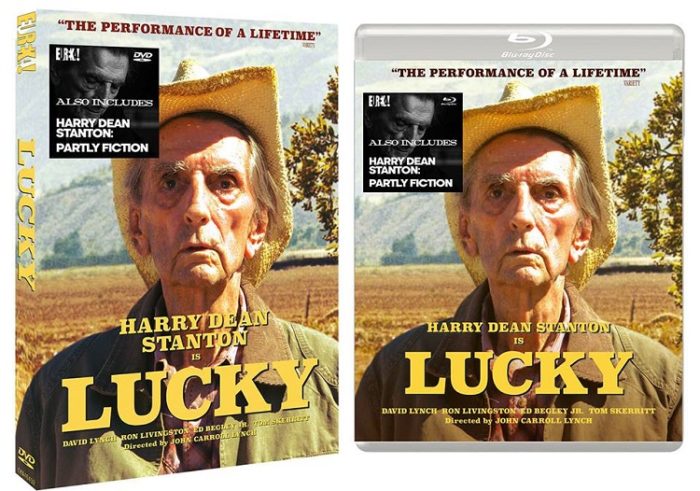 A giant tortoise inches its way across some parched ground.

We move indoors. A cigarette is lit, and a hand turns on a radio which plays some lively old Mexican music. A saggy body in baggy underwear, the old-timer performs some basic exercises before getting back to his smoke.

He drinks some milk, the only item in his fridge.

He gets dressed and steps out into the almost blinding sunshine of the outside world.

I like this guy already. He’s Harry Dean Stanton and everybody likes Harry Dean Stanton, don’t they? Here he plays Lucky, a part written with him in mind. Once watched, it’s almost impossible to imagine anybody but him in the role.

Lucky lives in a backwater town in the South West of America.

He visits a diner there where he’s obviously a regular.

He visits a bar and shoots the breeze with some acquaintances. His drink of choice is the Bloody Maria (tequila and tomato juice) served with a stick of celery which we never see him eat.

He likes discussing game shows and philosophy and he’s seldom short of an opinion. One minute he’ll dismiss Deal Or No Deal as ‘a convoluted piece of shit,’ the next he’ll proclaim that: ‘Authority is arbitrary and subjective.’

He buys three packs of cigarettes and is invited by the owner to come to a fiesta she’s holding for her son’s tenth birthday.

He later decides to go along and in front of the gathering he sings Volver Volver accompanied by four mariachis.

He collapses for no easily identifiable reason.

He visits a doctor and is told that he’s in exceptional health considering his age, albeit the doc notes that: ‘None of us makes it out of this thing alive.’

Lucky is a movie about human connections and mortality that eschews the kind of sickly sentimentality that tends to blight films about older characters. You will likely find yourself imagining your own final days and how you might want to die as you watch the story of Lucky unfold.

Pitching the script to moneymen must have been a tough sell. There is hardly any action and very little actual conflict. Instead, this is a low-key, unhurried but keenly observed film.

As director John Carroll Lynch puts it: ‘No bank robberies, or jumping from planes. While those things are dramatic, they don’t represent most of our experiences. We change from the inside.’

Lynch (no relation to David Lynch) has worked with many fine directors – the Coen Brothers. David Fincher and Marty Scorsese among them – and he’s obviously learned well from them and deserves a special mention. The cinematography is gorgeous too and, even though the film belongs to Stanton, the rest of the cast are also wonderful. 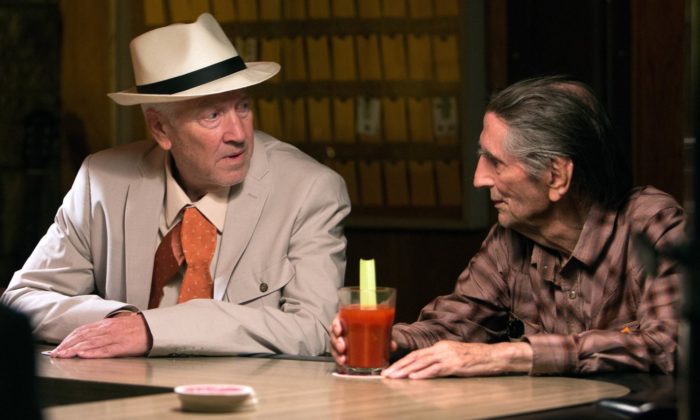 David Lynch is as eccentric here as you might imagine, distressed about the disappearance of his pet, an ancient tortoise that he’s named Theodore Roosevelt (presumably the one we see as the film opens). He later decides to leave all his possessions to the creature in a new will he is about to draw up.

Even if he looks too young for the role, Tom Skerritt (who appeared with Stanton in Alien) is in stunning form here as Fred, a former marine who fought in the Far East during the War. He chats amicably to Lucky, an ex-Navy cook himself, and tells a devastatingly sad story about a young Buddhist girl he encountered there during service.

Most Hollywood script gurus would likely disapprove of this film. The screenplay goes against their mantra of show don’t tell. Here characters reminisce repeatedly, but I would take a single recollection like Fred’s any time over two hours of Super Heroes battling non-stop to save the planet.

The same goes for a moment late in the film where Lucky – or maybe I should say Harry Dean Stanton – gazes directly into the lens of the camera and smiles enigmatically. It is at once haunting and somehow glorious. The image will linger long in my memory.

Harry Dean died on September 15th, 2017, just a few days before the theatrical release of Lucky in America.

Extras include the acclaimed 2012 documentary, Harry Dean Stanton: Partly Fiction, available for the first time on home video in the UK; a collector’s booklet featuring a new essay by Jason Wood and more.

For more on the film: https://www.eurekavideo.co.uk/news/lucky-starring-harry-dean-stanton-cinemas-and-demand-14-september-2018