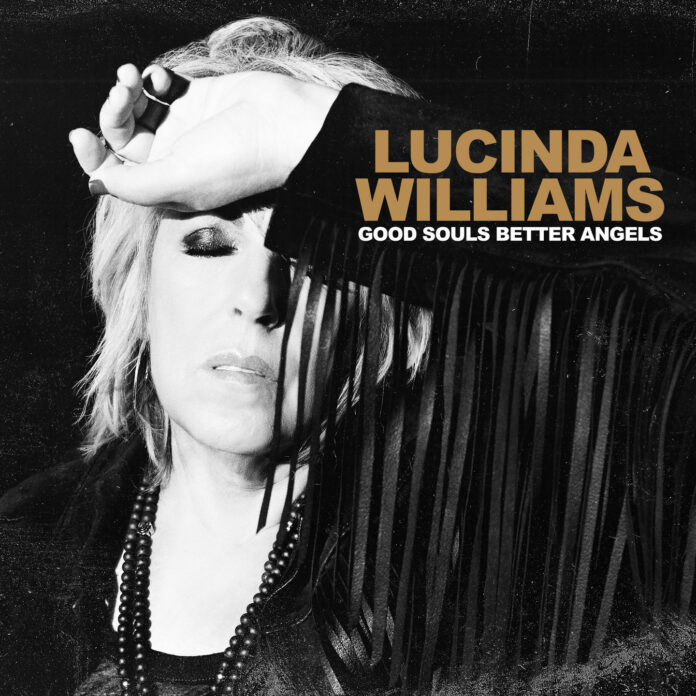 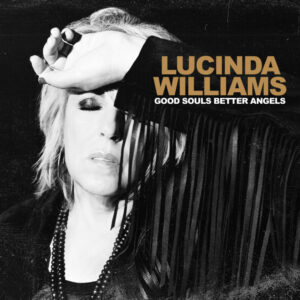 With dirty guitars turned up to 11 and songs skewering the bad guys, Lucinda Williams has made the perfect protest album for our times. The only surprise is that it took a 67-year-old woman to make the record we’ve all needed to hear.

Lucinda Williams sounds tired and emotional. Tired, emotional, angry and, if we’re honest, more than a little bit drunk. As angry and drunk as someone who’s been knocking back bourbon for three days straight with no sleep, belligerent but barely coherent.  She knows what she’s got to say is important and she’s gonna make people listen, whether they like it or not.

To be fair, that’s the way she’s sounded for a great deal of a career that has won her a loyal army of fervent fans while eluding the mainstream by being seen as “too rock for country and too country for rock.” That’s true, though it’s actually the biblical fire and brimstone of the blues, blended with the incendiary fury of punk, that informs her latest album.

She’s certainly never sounded angrier than on Good Souls Better Angels, which unites her with Ray Kennedy, who engineered her breakthrough album Car Wheels On A Gravel Road in 1998, and was recorded at his studio filled with vintage gear and analogue equipment in Nashville.

Over the course of five decades, beginning in 1979, Louisiana-born Williams has forged her own path, blending blues, country and rock with lyrics that owe more to literature and poetry than the Classic American Songbook. Now she’s turned her attention to full-blown protest music, with a set of songs, mostly co-written with her husband and manager Tom Overby, that articulate all our impotent rage about the shitshow we find ourselves in today.

It’s exactly the record that sums up our present plight and it’s hard to think of another artist – let alone a woman – who can rock out with this much unfiltered rage in her late sixties. The only surprise, apart from the age and gender of its creator, is that it was written and recorded before the pandemic had even begun.

Backing her here are her trusty touring band Buick 6, a hard-rocking trio of Butch Norton and David Sutton on drums and bass respectively, and guitarist Stuart Mathis, making the kind of blues-rock squall that hasn’t been heard since Ron Asheton first plugged in to bring mayhem to The Stooges all those years ago.

The album opens the way it means to go on with You Can’t Rule Me, a raunchy slice of badass bar-room blues – all grinding grunge guitars and slurred vocals, kick drums and rolling bass – that aficionados might recognise as an electrified version of a song from 1930s by arguably the greatest of all female blues guitarists, Memphis Minnie (who Williams previously covered on her 1979 debut album Ramblin’).

With Williams slurring her vocals like a woman dangerously on the edge – of sobriety; of sanity – within the first minute you feel like you’re in a bar in Beale Street or Chicago’s South Side, necking shots and stamping your boots on a sawdust floor. The second song, Bad News Blues, takes a more specific look at the tough times we’re in and sets the lyrical tone, summing up our leaders as “Liars and lunatics / Fools and thieves / Clowns and hypocrites.” You’ll find no argument here.

Then, with her temper rising towards boiling point, Williams delivers the pièce de resistance, Man Without A Soul. No prizes for guessing who is on the end of this particular diatribe, spat out in a slurred drawl dripping with contempt: “You’re a man without truth / A man of greed, a man of hate / A man of envy and doubt / You’re a man without a soul.” There’s an ominous, brooding mood as drums beat a military tattoo, slide guitars wail and Williams, by now incandescent with rage, chants her fervent belief that he will get his comeuppance one day.

“Yeah, it’s coming down,” she warns confidently, as the drums and bass rattle and shake those White House foundations, and Mathis’s guitar, all distortion and fuzz, builds up a head of steam the like hasn’t been heard since Funhouse.

That maelstrom of distortion crops up again and again. Big Rotator is another state-of-the nation epic filled with searing guitar and biblical blues references to John the Revelator and furious denunciations of a world – this world – where “Liars are venerated / Losers congratulated / Cheaters celebrated / Thieves compensated / Vultures satiated / Murderers exonerated / Guilty vindicated / Innocent incarcerated.” We all know that world.

We hear more of the same on Bone Of Contention, another for the guitar fans, and Down Past The Bottom, a break-up song that could have come straight from the Robert Johnson songbook with its lyric about sinking lower and lower, “Down past the bottom where the devil won’t go.” Williams, you feel sure, has been down to the crossroads to make that deal, and lived to tell the tale. World-weary doesn’t begin to describe the sound of her ruined, ravaged voice as she confesses: “I’ve had a lot of time for thinking / A lot of time for walking / A lot of time for drinking.”

There are quieter moments, for this is an album that alternates between anger and optimism: it would be all too much if there were no hope of redemption. The slow, country-tinged Big Black Train sounds like a moody meditative lament on depression, and arguably on the ageing process itself, while When The Way Gets Dark is a typically tender-but-tough tale of hope, defiance and survival shrouded in a country lament filled with shimmering guitar.

Even on the other standout song, Wakin’ Up, a genuinely shocking tale of an abusive relationship, Williams has an angry, defiant riposte. “It fucked me up but I’m wakin’ up,” she drawls, and you can almost see the curl of her lip as she describes it: “He threw a punch, somehow I missed it / I should’ve split, thought I could fix it.”

It’s not for the faint-hearted and Williams fills it with fury as she catalogues his crimes. In others’ hands her words might make her seem gratuitous but there’s an unmistakable edge of defiance to her voice as she sings: “He pulled the kitchen chair out from under me / He pulled my hair then he pissed on me / Next thing I swear he wants to kiss on me.” You feel certain that “he” lived to regret it.

After all that intensity, the album ends with a gentle, prayer-like ballad, Good Souls, that leaves the listener with a feeling that, however bad things might have gotten – and it’s hard to see the light at the end of this particular tunnel right now – there is salvation and, most importantly, hope: “Keep me with all of those / Who help me find strength / When I’m feeling hopeless / Who guide me along / And help me stay strong and fearless.”