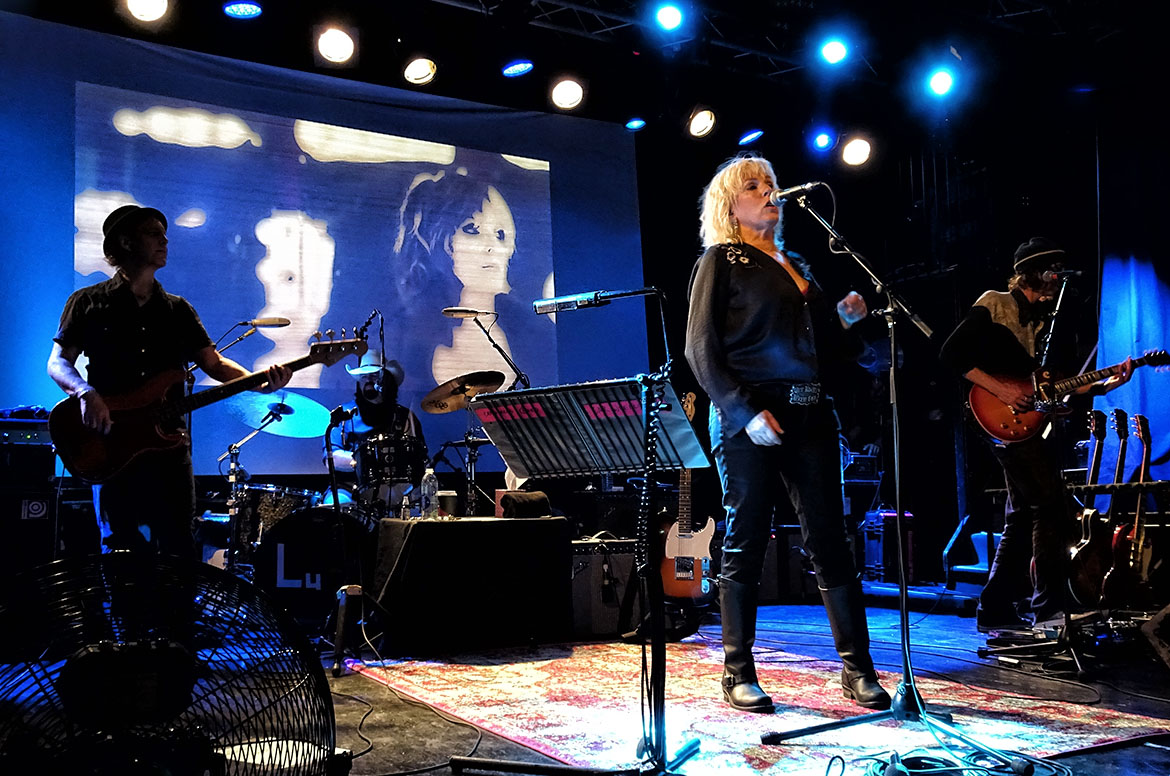 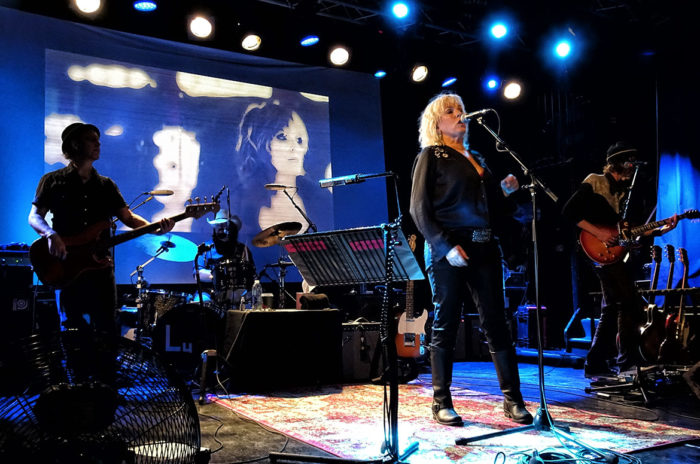 At a sold-out Holmfirth Picturedrome, nestled in the picturesque surroundings of the Pennine hills, we are treated to a celebration of an album which many attribute to starting the country rock/ Americana music scene as well as providing Lucinda with her own first commercial success. And the multi-Grammy award winning artist has taken this opportunity to enhance the live experience with not only a performance of the album in its entirety, along with a host of other great songs, but also a display of personal photos, images and memories which provide a visual backdrop and more than a nod to the creative points of reference from which each of these songs were written.

After those early years of trawling around numerous record labels, both large and small, trying to find anyone who would take her seriously as an artist, I have no doubt that Louisiana’s Lucinda Williams will look back at the last 20 years since the release of her hugely influential, career and genre-defining album, Car Wheels on a Gravel Road, with a wry smile on her face. Lucinda’s strong affinity with British audiences that is clearly in evidence is in no small part due to the fact that it was a British punk label, Rough Trade, who were the first ones to “get her” and put out her first self-titled album, even though there was no clearly established market for the music and songs it contained.

Lucinda’s vocals are fuelled by a classic southern drawl and even at the age of 66, she still retains a magnificent tone and resonance in her voice which adds such a strong meaning to every song she sings. She is backed by the excellent Buick 6 who have their own catalogue of material behind them. Lucinda tells us that you can write a song about anything, and her own songs throughout this album are focused on a whole series of usually tragic individuals, broken romances and places which have an important place in her life, albeit with some degree of poetic licence to change certain facts to suit the mood or direction of the songs. Throughout all this, Lucinda has a unique ability to paint such a vivid visual picture of life in the southern landscapes of America.

After a brief introductory video comprising home movies of a very young Lucinda with her family, Lucinda launches straight into Right in Time and works her way through the album in the order in which the songs were originally presented, taking time out between each song to explain the background and context to many of the songs, and drawing on the many memories stirred by their creation and performance. The second song is the title track of the album, portraying a day in the life of a child as told by both the parents and the child. Lucinda admits that she had never realised that the child on the back seat of the car looking out of the window was herself until her father had pointed it out to her upon first hearing her perform the song live shortly after it was written.

The album cover was taken from a photo by Birney Imes from a collection of images of the American south which form the perfect backdrop for Lucinda’s songs and her performance tonight. 2 Kool 2 Be 4-Gotten was inspired by an image by another American environmental portrait photographer, Shelby Lee Adams, and whilst not knowing the real story behind the graffiti on a wall, it was sufficient for Lucinda to develop her own ideas on what might have prompted it. Drunken Angel has been a popular part of Lucinda’s live repertoire for many years and is probably the best mix of country and rock you will ever hear. It tells the tragic tale of country music singer songwriter Blaze Foley who mixed in the company of Townes Van Zandt. At the time no one outside of Texas would probably know who Blaze was, but since writing the song he has taken on almost folk-lore status and has even been the subject of a recent film by Ethan Hawke. Blaze was shot and killed in a senseless accident but at Lucinda’s own admission, the song could have been written about so many of the great artists we have lost over the years.

Concrete And Barbed Wire is a lover’s lament inspired by the downfall of the Berlin wall. And with the current political landscape in America, Lucinda observes how the message it conveys is as relevant today as it has always been, such that the song could have been written yesterday. 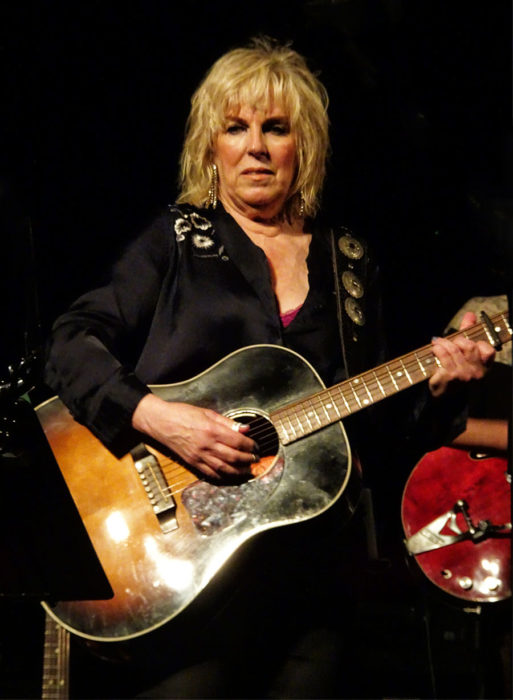 Lucinda’s love of using names of towns to give visuals to songs and decorate them, alongside the characters within the songs, is evident in the classic Lake Charles. Being her own place of birth, here she tells the tale of a former lover, Clyde Joseph Woodward III. Clyde was born in Texas but grew a deep affinity with Louisiana, spending much of his time trying to remove himself from bad influences and his self-destructive personality. Ultimately he would succumb to drink and drugs, which form common themes in Lucinda’s songs from these turbulent years.

The band then went up tempo, featuring the only song on the album not written by Lucinda, but penned by Randy Weeks for whose band, the Lonesome Strangers, Lucinda opened back in those early days. The song was a gift from Randy for whom Lucinda clearly has a lot of respect as a songwriter and guitarist, noting that this was more a celebration of “those artists who are still flying just under the radar, where most of the better stuff is”, something I think most of us can relate to. A rocking version of Lost It followed, demonstrating Lucinda’s tendency for the contrary position, the song being inspired by her annoyance at seeing a lot of bumper stickers on cars in Houston displaying the image ‘I Found It’!

Metal Firecracker was a term for a tour bus which derives from a bass player who filled in on an early tour. Another case of a road romance which blossomed but which quickly disintegrated once the tour was over. With some deeply personal revelations, Lucinda admits it was fun at the time but not one of her finest moments, but it did provide good material for this song as well as Still I Long For Your Kiss.

Joy proves to be the most guitar-fuelled song on the album, inspired largely by then co-producer, Steve Earle, who encouraged Lucinda to start pushing the boundaries of her songs. Jackson brought an end to part one of the show and after a very short interlude, the band returned to play a few songs from other albums including Steal Your Love, Changed The Locks – which she was very proud of the fact that this was covered by Tom Petty, an epic version of Essence, Honey Bee and Foolishness. However there was no way the audience would let the band go home at this point as the raucous response from the audience could probably be heard over the other side of the Pennines. A great version of Righteously started the encore, giving more than a nod to a certain Lou Reed bass line at one point and this segued seamlessly into a magnificent and anthemic finale of Rockin’ In The Free World, possibly prompted by an earlier shout out from the assembled masses. At this point everyone was on their feet and the feeling in the room was nothing short of euphoric.

This really is the music of the American heartland and, as Lucinda observes, “No one is safe from me and my mighty pen”. I have rarely felt so much love being shared between an artist and their audience as was obvious tonight. Suffice to say that the audience were drawn in right from the very start and enjoyed every minute of this epic 2 hour 20 minute performance. And the great news is that Lucinda is recording a new rock’n’roll album in Nashville and so hopefully it won’t be too long before Lucinda returns to the UK to promote that. This was a very special night with a very special lady and we are already looking forward to her next visit.