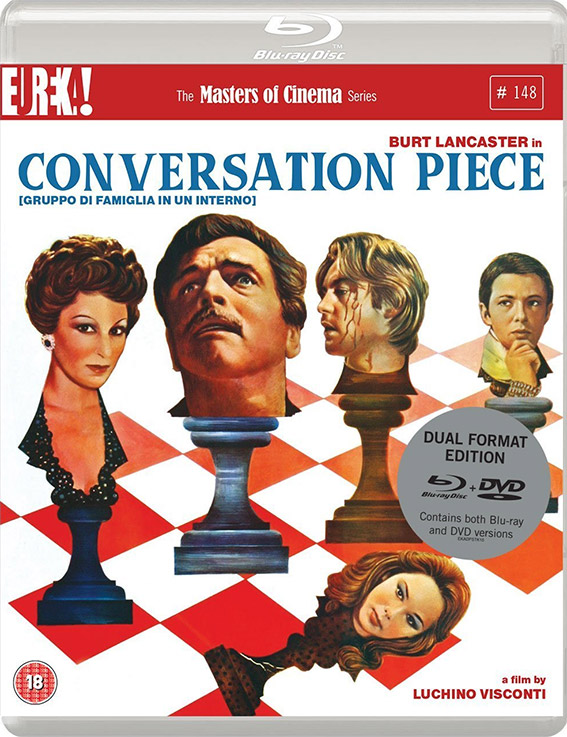 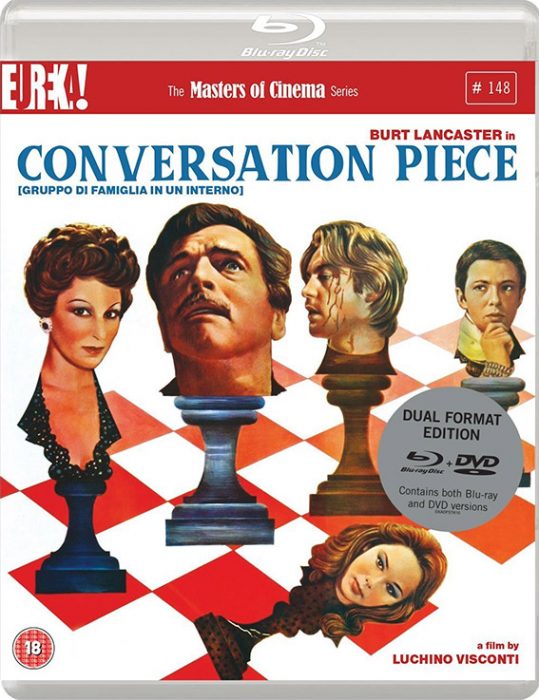 It’s the middle of the 1970s, a time in Italy (and elsewhere) of escalating socio-political tensions and sexual liberation.

Burt Lancaster, whose character is never named although he is repeatedly called the Professor, lives in a spacious and sumptuous apartment in central Rome. Significantly he has chosen a life without emotional entanglements although he does appear to cope well enough with the little human interaction he does encounter – usually in the form of his housekeeper Erminia.

He studies and collects art and is particularly drawn to, if not obsessed by, the kind of informal group portraiture known as the ‘conversation piece’ that reached its peak in England in the 18th century. Indeed, the professor could be accused of preferring paintings to people.

As the film opens, he examines a small Arthur Devis canvas that two art auctioneers are keen for him to purchase. While they give him the hard sell, a woman barges around his home. He believes she is with the two men but she is sizing up the flat upstairs hoping to rent it for a year.

This is Bianca Brumonti (Silvana Mangano), a needy, arrogant and spoiled socialite, the (separated) wife of a right-wing industrialist, whose wealth has installed in her the feeling that she is entitled to whatever she wants.

Although he protests that he plans to use the space upstairs to expand his library, Bianca pressurises the Professor into leasing her the apartment and quickly moves in her family of sorts: daughter Lietta (Claudia Marsani) and Lietta’s boyfriend, Stefano (Stefano Patrizi). Then there’s Konrad, Bianca’s young gigolo, played by Helmut Berger, Visconti’s real-life partner, who had previously worked under the director in The Damned and Ludwig.

This foursome immediately shatter the Professor’s solitary life and routines, ripping down walls without his permission, blaring music and interrupting his work regularly in order to borrow his phone.

They redecorate in direct contrast to the decor downstairs, mainly in minimal white but with splashes of bright primary colours and a pop art feel and they appear determined to involve the professor in their squabbles although he’s equally determined to keep them at arm’s length.

Could the two sides ever grow closer?

Well, the professor despite repeatedly claiming he was not going to buy the Devis painting shown to him earlier, did eventually change his mind and become desperate to add it to his collection and Konrad, at least, is able to discuss art and music to the older man and even helps him by giving him some information about one of many paintings hanging on his walls. Later it becomes apparent that they also share some kind of leftist political kinship, albeit it’s difficult to imagine the professor ever being as radical as the younger man, who became politicized during the student uprisings of 1968.

This penultimate film by Visconti is one obviously affected by the director’s poor health. Due to a stroke suffered a couple of years earlier, it became necessary for the filming to be as simple as possible, which meant that everything was a shot in a set constructed entirely in the studio.

I doubt that adapting the piece for the theatre would present too many problems and it would have to be said that anyone expecting the operatic sweep of Visconti’s 1960 epic Rocco and his Brothers might be disappointed.

Photos from the time show the director as a frail figure but his cast and crew remember him as remaining a strong and decisive presence on set. As the film reaches its climax though, scenes begin to shorten, making me speculate that Visconti’s energy levels were sagging by this point although the change of pace works well.

The acting is generally very good, especially the lead performance of Burt Lancaster, whose health and vitality Visconti craved during the shoot, while the costumes and sets are immaculately designed and the cinematography, despite the indoors setting, is often outstanding.

Few, if any, would regard this as his masterpiece, but Conversation Piece is still a fascinating slice of cinema from a master filmmaker, and though minor by his standards, I’d much rather watch it than anything currently showing at my local multiplex.

Extras include optional English SDH (for the English track) and optional English subtitles for the Italian track, a documentary about the making of the movie and a booklet featuring a new essay by Pasquale Iannone.

For more on the film visit the Eureka! Masters of Cinema website.