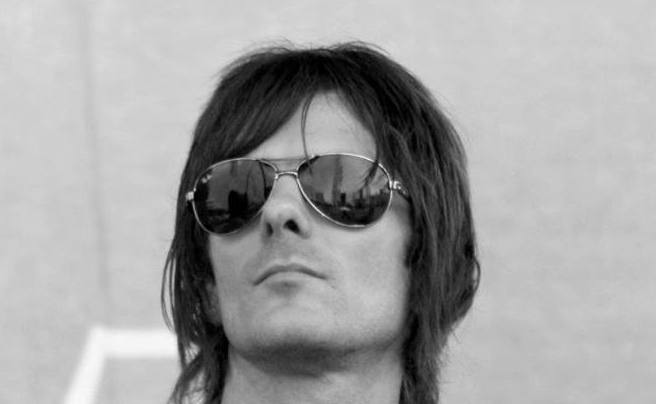 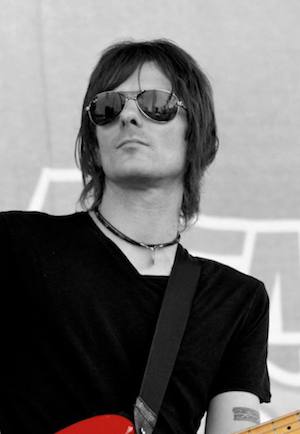 His first group was The Clinic, then he moved on to form The Strays, but for Toby Marriott it’s all about his latest group Black Drummer now. As they look ahead to releasing the follow-up on their storming debut four track E.P. The Laburnum House, Toby Marriot met up with Louder Than War’s Carl Stanley for the following interview.

Though the singer-songwriter Toby Marriott scored in the past with tunes like Life Support by The Strays (which featured in the film Transporter 2) it’s Black Drummer’s recent release Laburnum House E.P. (recorded in Nashville) which has arguably been his finest and most accomplished record yet. Every track on it is a winner; there’s the dramatic / sonic sounding blues of  Illegal Tenement Blues, the melodic and slightly psychedelic dream like roll of Chasing The Hangman, the good-rock feel of Graf Zeppelin and stand out title track The Laburnam House.

Confidently playing in and around a whole range of sounds, genres and styles (dubbed ‘prog-mod’ by Marriott himself), Laburnum House E.P. pays testament to his creativeness as a songwriter as much as it does to his guitar playing and singing.

Toby Marriott not only has a very similar look to his father, Steve, but he’s also blessed with that same kind of fired-up / soulful vocal his father is still loved for today – and that’s not taking away from the hard work that Toby’s put in to finding his own particular tone and sound. In just the same way that it was so natural and all instinct for Steve, so it is for Toby who possesses a unique and exciting vocal.

It’s actually Toby’s songwriting (and guitar playing) which I felt first. He has an obvious understanding and appreciation for the classics while still always keeping it fresh and about the ‘now’ rather than attempting to recreate some 60s soundscape. Tapping into the blues, indie and a bit of psychedelia, as well as, of course, rock ‘n’ roll, he manages to set it to a more contemporary backdrop, capturing and nailing it down with fine production by ‘name’ producer’s Dave Cobb and Vance Powell’s (Kings of Leon / Jack White). Similarities can maybe be drawn to The White Stripes, Kasabian or even The Arctic Monkeys in places, but the style and drive is all about Toby Marriott.

As we head into 2014 Black Drummer are already eyeing up the follow-up release to The Laburnum House E.P. and so now seemed like a great time to talk to him about that, as well as about his songwriting, his influences, playing live and his thoughts on today’s musical scene. First though, check out the track Laburnum House by Black Drummer … 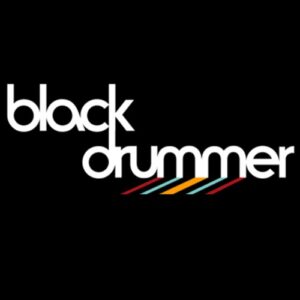 Hi Toby – thanks for talking to Louder Than War. Right now I understand you’re on a mini tour, where are you and how’s it going ?

Toby Marriott: I’m actually on a southeast mini-tour of the U.S. with a singer-songwriter named Paris Luna, who is a country / southern rock performer. Once that has wound down, I’ll be focusing on Black Drummer.

I’ve been checking out Black Drummer’s debut E.P., there’s some cracking tunes on there, the bluesy / psychedelic Chasing the Hangman and the more rock driven Laburnum House … how do they sound live?

Black Drummer shows have been quite interesting. Due to touring on just a four song E.P. we’ve had to incorporate some of my former band’s songs, which makes for an interesting mix. Crowd reaction has been good, I would say the older crowds enjoy the more classic rock ones, while the younger ones obviously dig the Laburnum house vibe more. Because of my background, I tend to get a vast range of age groups at my shows.

The E.P. was recorded in Nashville with producer Vance Powell and Dave Cobb, what do you feel are the stand out tracks on it?

I like all of them, but my favorite would have to be Laburnum house, to me it flows well and was recorded in one take. It was an idea I had floating around during The Strays, but didn’t get it finished until the black drummer session.

Do you feel Black Drummer was a big departure from your previous group The Strays, and what were the key influences behind the sound and style of Black Drummer. Also, what was your idea behind the band’s music?

I would say Black Drummer is slightly more maturer than The Strays, the latter being my last stance at fulfilling my youth. I enjoyed The Strays, but we did get smothered by the LA / Orange county punk scene, which was something I didn’t want. My blueprint with any band is to allow all influences to flow as one, to blend old, and new, and use whatever instrumentation was needed. With The Strays it was a basic vox, two guitars, drum, bass. With B.D. I’m expanding it. As far as influences go, there are too many to list. During recording, I was listening to Amon Duul II, hip hop, jazz, Turkish psychedelia, and a lot of Spaghetti Western music.

Who plays what in the group with you … do you play the lead guitar parts as well as sing, and do you write as a group or are all Black Drummer songs written by yourself?

The live band differs to the recording one, so sessions are usually a mishmash of who’s around, and who wants to do it. Two of the recording musicians were in Rich Robinson’s touring band, and the drummer is in a band called Leagues. Funnily enough, most of the guitar was played by my long time producer, Dave Cobb, who I’ve know for 20 years. Live, I play most of it of course. All the B.D. songs were a collaboration between Dave Cobb and myself. 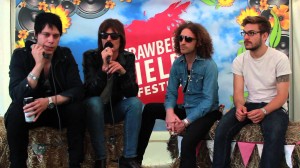 So what are the kind of things you write about Toby, for example what’s Chasing the Hangman about, is it the lyrics or actual music, which is more important or comes first when it comes to your songwriting?

Writing for me all depends on the song. Some the melodies come first, others the music, sometimes lyrical content. I watch a lot of movies (mostly strange B ones) which give me ideas. The days of writing about a romantic breakup are long over. I got the idea of chasing the hangman while watching a very obscure spaghetti western movie, about a woman who falls in love with a bank robber who gets hanged. Afterwards, she takes his ashes and puts it in a silver locket that she puts around her neck. Then she becomes a bank robber herself … a very strange film, but unique enough to write a song about.

I’d like to get your thoughts regarding rock ‘n’ roll today, British groups and guitar bands in 2014 … do you feel we’re in a good place or is it a bit dull maybe, who do you rate?

I’m never really one to complain about contemporary rock scenes, and although England might not be at its heyday there are still a lot of good bands. I like Band of Skulls and Savages. I’m also an admirer of Serge Pizzorno’s music. These days, with the help of the internet, music listeners don’t have to listen to just what they’re told to anymore. Unlike growing up in 80s Britain, where all you had (if you were young) were Top Of The Pops and magazines like Smash hits. This made me delve deeper. I’d jump on the train to London, and go to vinyl shops. This is how I discovered the Stone Roses and the beginnings of House music as well as my love for 60s garage”. 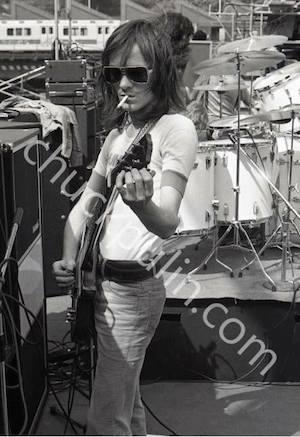 If I could ask you Toby, what is it actually like for you being the son of Steve Marriott and being in a group and recording / releasing music yourself, when someone comes over to you and starts talking about, say, The Small Faces or something … can it be a drag or is it something you’ve just learnt to deal with and don’t really mind?

Yes, it definitely can be a drag. The three stages I would say are that you begin loving the attention, then despising it, and finally you learn to just deal with it. I’ve even used alias’s before, just to shake the tag. Unfortunately there are a lot of people that think you’re supposed to sound like your famous relative, just because you’re related to them. I remember taking an early demo to a record exec once. After he listened to it, he scratched his head, and complained that it didn’t sound like the Small Faces, or Humble Pie. When I asked him why the hell would it, he replied because he was my father. Needless to say that meeting ended as quickly as it started.

So have you been writing for Black Drummers next release? An album maybe? … and will it have the same sound and feel as the E.P. or be something quite different?

Sort of the same, yes, whatever the sound is. I just got my mini-moog fixed, so I’m sure I’ll be tinkering around on that in the next few month’s. We’ve got tons of unfinished ideas lying around, so I’m sure they’ll be no shortage of songs.

…and lastly Toby, where can we see Black Drummer play later this year, any chance of seeing the band at any festivals this summer?

Were working on some festivals, yet recording is paramount at the moment, so we’ll see. Hopefully there’ll be some kind of release later in the year, with a tour to follow.

Follow Black Drummer on Facebook or on Twitter where they have the username @blackdrummerUK. Black Drummer also on their record label’s Soundcloud and they’re streaming the whole of Laburnam House E.P. (As embedding is turned off we can’t add it here but it’s worth checking out!).