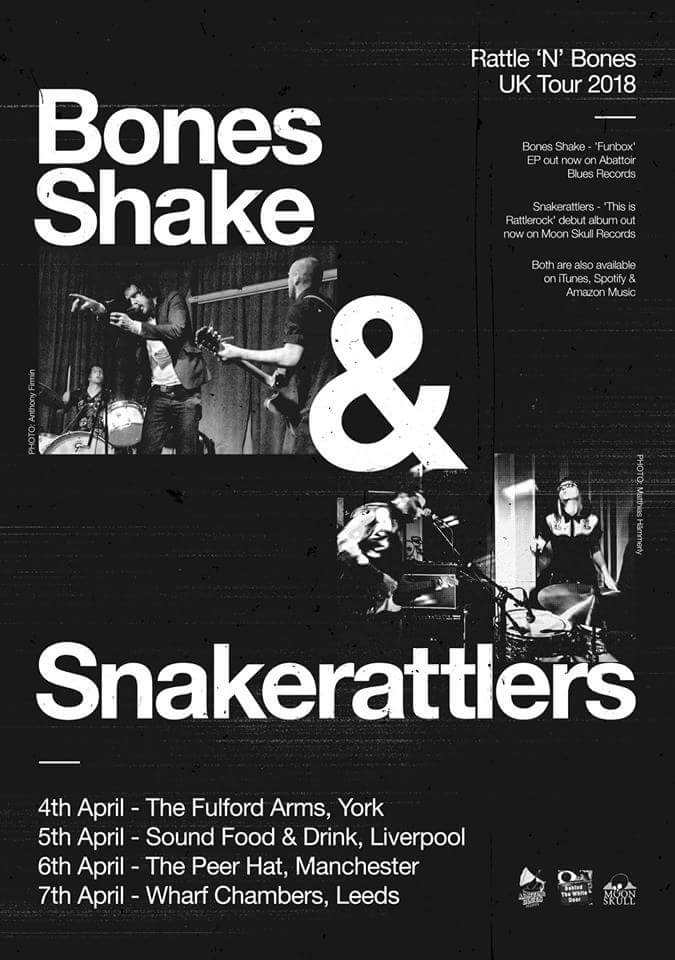 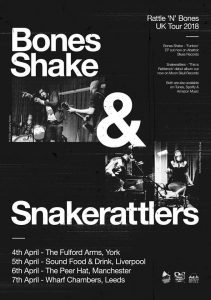 If your musical preferences lean towards the darker edges of rock ‘n’ roll, those areas inhabited by those who proffer a raw, unflinching assault on the senses then we suggest you don’t miss this double headline four date smash and grab raid entitled ‘Rattle & Bones’

Combining the savage attack of The Snakerattlers whose debut 2017 ‘This Is Rattlerock’ (LTW Review) left us in a ‘Born Bad’ frenzy, with Manchester’s Bones Shake who cough up some of the darkest twisted blues you are likely to hear an a good long while; check out their just released ‘Funbox’ EP courtesy of Abattoir Blues Records. 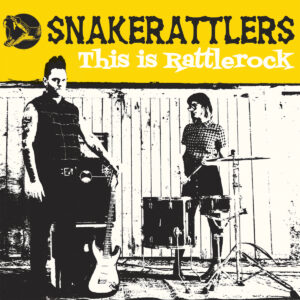 The first date is the 4th April in York at the legendary Fulford Arms; also on the bill will be Howlin Bones and the Nottingham surf legends; Clambake – it’s a pay what you want gig. 8pm start.

Second up, on the 5th April the tour arrives in Liverpool, as part of the Free Rock And Roll Events at Sound Food And Drink, in Duke Street; support from the local long-gone Swingin Bricks – it’s free entry.

The third show, Friday 6th April the tour heads to the stomping ground of Bones Shake, as they appear at The Peer Hat, Manchester, additional support comes from Hopper Propelled Electric. 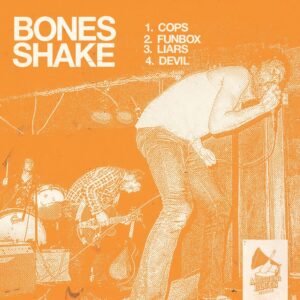 The final gig in the run, Sunday 7th April is in Leeds – this one is more of a mini-festival than a gig at the Rattle & Bones tour collides with the Nosebleeds album launch, also appearing will be the magnificently named Batwolf (ex Black Volvo), Riggots, , Guns On The Roof, and of course Nosebleed headlining.

The tour has been put together with support from Abattoir Blues Records, Moon Skull Records and Behind The White Door, most of the gigs are FREE entry; this is rock ‘n’ roll at its most frenzied, a sweat soaked glimpse into the adrenaline burnt underbelly of UK music; not to be missed!