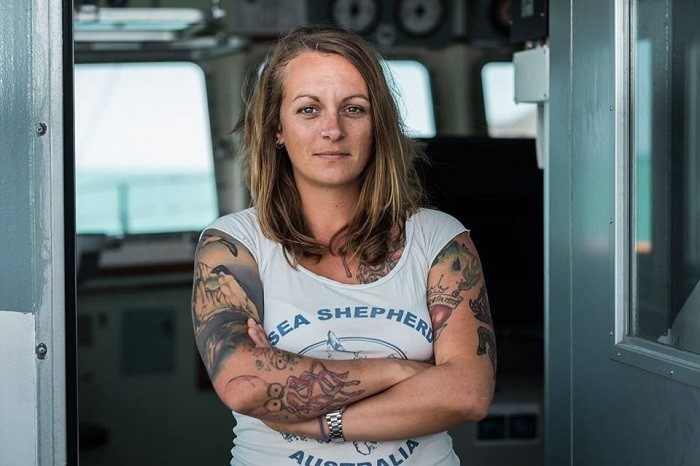 In this toxic modern world run by seriously damaged individuals like Trump, Johnson and that idiot in Brazil there are few beacons of light.

Now that music culture is neutered where are the counter culture figures making the noise? It turns out they are actually on the front line instead of wasting their time arsing about in the music business.

Pia Klemp is an activist, a biologist, and a boat captain. The 35 year old from Bonn, Germany is getting ready to stand trial in Italy for helping to rescue more than a thousand migrants who were at risk of drowning as they tried to reach Europe. Klemp faces up to 20 years in prison if she is convicted of helping to aid illegal immigration.

Plucking the desperate people out the water as an act of humanity she was, by turns, awarded a medal in France which she turned down and is now on trial in Italy and her ship, the Iuventa, was impounded in the summer of 2017, and Italy has moved to forbid her from sailing around the Italian coast.

After rescuing hundreds of migrants in the Mediterranean, she has refused a medal awarded by the city of Paris for bravery.

In a Facebook post on Tuesday, Klemp accused Paris Mayor Anne Hidalgo of hypocrisy for recognizing her work, citing poor conditions faced by migrants in the French capital.
Klemp, from Bonn, Germany, was awarded the Grand Vermeil medal in July alongside Carola Rackete, a fellow member of migrant rescue organization Sea-Watch.
In 2017, her ship, the Luventa, was seized by authorities in the Italian port of Lampedusa, and she was subsequently charged with assisting illegal immigration.

Originally a biologist she joined Sea Shepherd because direct action is now the only way left to deal with the illegal activities on our oceans that are sanctioned by filthy greedy governments. It’s unusual for a woman to be a boat captain. According to Sea Shepherd, only one percent of the boats in the world are captained by women.

Sea Shepherd are hero’s in world of cowards.

What gives us the right to destroy valuable eco systems in the name of profits for the very few. It’s an insanity.

Not only with Sea Shepherd Klemp is also the executive director of Aquascope, an organization that works to combat illegal fishing.

Whilst on Sea Shepard duty as the ship’s captain she started rescuing migrants lost on the high seas.

She said that she believed that saving drowning people is a duty: “For every captain this is the duty,” she told Sea Watch. “Apart from that it should be self understandable for overprivileged Europeans like us.”