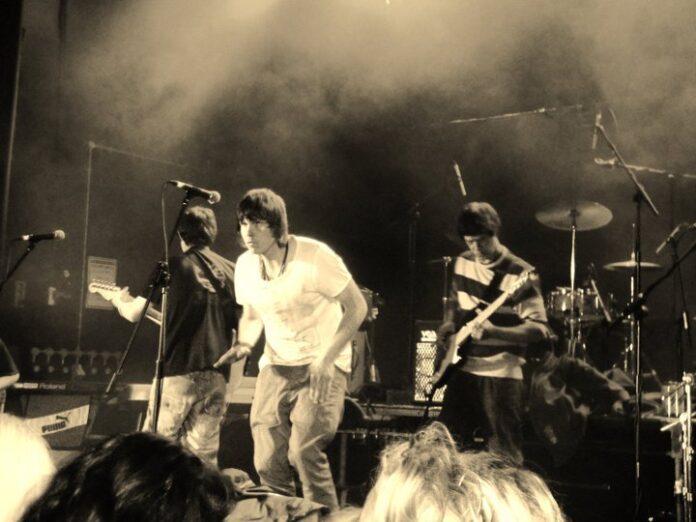 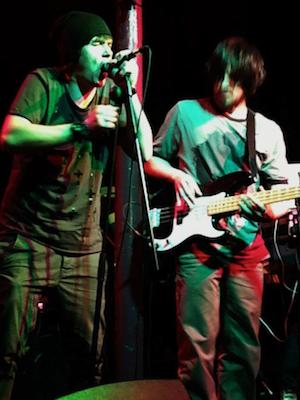 The Moods are a thought provoking, abstract, abrasive band who make driven electro-dance music all about tension and mood. Just have a listen too stand out track Kids Carry Guns; its poetic, politically aware narrative and sonic ambiance signalled the arrival of The Moods.

Louder Than War recently interviewed the Manchester five piece, below is what they had to say…

Louder Than War: Hi lads and thanks for talking to us … Firstly, can you tell us where The Moods are from, and how did the group initially come together?

The Moods: We’re all proud Mancunians, from the inner city streets of Beswick, Openshaw, Clayton and Levenshume. The Moods were formed in the Music rooms of Wright Robinson High school, Abbey Hey, in early 2000 by Mark C, Paul H & Daniel Clarke (Death To The Strange). Over the last few years we have had two or three members come and go and now we have finally found a settled unit of great friends and musicians and have had the same line up since 2009 of Mark Cunningham (vocals), Paul Holmes (keyboards and drums), Philip Horrocks (drums and keyboards), Chris Barrett (drums) and Dave O’Rourke (bass).

The original band name came around when a friend of Marks told him he was always in a “philosophical mood,” this instantly became the name of the band, which has since been shortened to just The Moods.

Can you describe the sound of The Moods and explain where it comes from?

In the early days we were very much into psychedelic and prog rock and our sound was shaped from these kind of influences. When we got our current line up together we made the conscious decision to change the direction of the band to incorporate all of the band members’ wide ranging musical tastes. We now play an eclectic mix of styles which include reggae, Balearic, dance, dubstep, indie, acid house, hip-hop, trip-hop, drum and bass and everything in between. This has resulted in our sound crossing all genres to the point where we can’t even describe what style we play anymore! Our music is now a real melting pot of styles and genres.

Who writes the lyrics and music in the band?

It’s a real team effort and we think that no band can fully interpret a song without all of it’s member’s input. All music and lyrics are written by The Moods as a band of brothers and this is a philosophy that we have always carried.

So how about influences on the group, you have such a distinctive sound so I’m guessing there’s a wide range of sounds and styles that have inspired your own?

In our early days Pink Floyd, The Doors, The Coral, Pearl Jam and Nirvana were all massive influences on our guitar driven sound. Since then we have moved away from a guitar based sound to be more digital and electronic in style. Artists such as Portishead, Radiohead, 808 state, Orbital, Damian Marley, Faithless, Prodigy, Bjork and many more left-field artists have had an influence on our current sound.

Describe the track ‘Kids Carry Guns’, can you tell us about the whole idea behind the song and video?

We have recently seen a lot of stuff in the news about slavery in a time where we thought it was consigned to history. We think that society has become complacent and tends to not want to see the real issues that still haunts humanity. This led us to want to make our own statement about how we see things, along with our usual touch of irony – ‘kids carry guns, the future looks bright’. The music has a real dark and moody feel to it and we felt that this needed to be portrayed in the video.

The video, as we see it, is questioning who really are the monsters in this world and who we as a society are led to be in fear off. We purposely put it in black and white to give it a real sinister feel and it was a nod to the old horror movies such as Nosferatu and Frankenstein.

How about your releases so far? What would you say your most popular tune to date has been?

We have put out a number of self-made videos, via open door media, and the one that really seemed to capture the imagination of people this year was ‘Hope’. It has been played on many radio shows including Terry Christian’s Imagine FM as well as many international internet radio shows and we were honored for it to be named as ‘track of the year’ on Stephen Doyle’s Sonic Diary Show at Salford City Radio. It has also been a song that has led us to make many great friends this year including Tony Thornbrough’s Be Reet radio show, JB Barrington AKA Words Escape Me, Zac Peach and Paul Sewell’s Unsigned, Sealed, Delivered.

This year we are aiming for a summer release of our first album that we are currently recording with the help of Stable Studio, The Manchester Label and Luca H-Sound Mastering.

How about music today, where do you think we are with new music, new groups and new artists, anything you like right now?

From gigging around Manchester over the last few years we have seen some great unsigned acts that we go out of our way to listen to and watch. We would highly recommend that people get themselves out to see The Joint who just smash it every gig that we see them play, Death to the Strange who are fantastic musicians and craft some beautiful songs, Livestock Jihad who are a band that everyone needs to see at least once for their energetic, anarchic live punk shows and Kingdom Lost who are another great band that carry a similar ethos in their lyrical content.

Outside of Manchester some must-see acts are Middlesbrough’s Bi:Lingual, Glasgow’s The Girobabie’s, Bristol’s Dub Mafia, The Sun’s from Chester and Broken Dialect from Wolverhampton. Another show you must see away from music is a Words Escape Me (JB Barrington) show which some people call poetry, call it what you like, everyone should treat themselves and go and see his emotional roller-coaster of a live show. 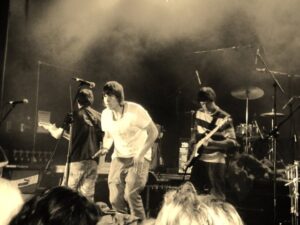 What would you say would be the bands biggest highlight so far?

We’ve had many great gigs over the years, up and down the country, which have supplied us with some great nights and memories. Also, the recent trend of our fans taking it upon themselves to create T-Shirts and posting photos of themselves bearing the #IAMAMOOD slogan has brought many a smile to our faces. The biggest highlight, for us as a band would be the strong bonds that the five of us have forged over these years and we have gone from being great friends to now considering ourselves as brothers.

…and lastly, can you tell us what a show by The Moods is actually like, and where can we see you play next?

Our gigs just seem to get bigger and bigger and they have now developed into a real ‘party’ atmosphere. There is no barrier between the crowd and the band and this transcends into a gathering of friends, fans and like-minded people, all having a brilliant time together. Whether it’s on one of the famous party buses on the way to London or at one of our regular, ‘Rock It Til The Wheels Fall Off’ nights that we host ourselves, you know that you are always in for great night out and YOU are ALL invited because all of you are MOODS.

Friend The Moods on Facebook HERE. You can also check out more music by them on Reverbnation.