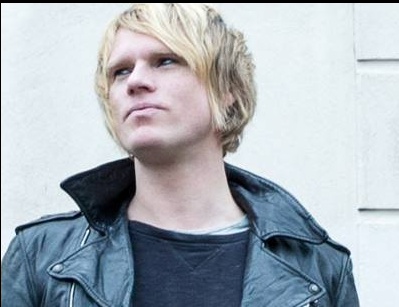 As a long-time admirer of his music, our man Simon Tucker jumped at the chance to interview Cardiff-based electronic producer Michael Conformist. Here they talk about Michael’s upbringing, his love of music, and his wonderful new album ‘Lifestyle Bible’.

Hi Michael. Congratulations on the wonderful new album. Before we talk about it I would like to go back to the beginning, when did you first discover music and what were your early favourites?

Thank you, very kind of you to say so.

Growing up my mother was always playing Led Zeppelin, T Rex, David Bowie and things like that around the home and in the car.  So I picked up on things like that and began to explore more for myself.  I also distinctly remember that my older sister had a book, a “History of Rock n Roll” type-of-thing , and I saw a picture of Sid Vicious and thought “Cooool!”  So then I started getting into the Sex Pistol and other punk stuff.  A little later I got into stuff like Nine Inch Nails which then led me to discover Skinny Puppy, Throbbing Gristle, Front 242 and that type of aggressive electronic style.

Have many of those artists remained in your collection?

A lot still do. I was listening to Skinny Puppy earlier today! Don’t get me wrong, I’ve also bought some terrible music in my time but as you get older your tastes develop but sometimes I think you’re looking to find that essence that made you really like a particular song or band when you were younger.  That raw excitement.  If a song has an emotional attachment to you in doesn’t really matter if it’s good or bad music.  Or “cool” music.

When did you start to make music yourself?

I was about 8 or 9 and I was messing around with vinyl records on the home stereo.  Speeding them up and down.  Primitive scratching.  I made a two track recording of a messed up version of Black Sabbaths Iron Man, using a tape player.  I got a 4 track recorder when I was a teenager and learned how to multi-track.  I made tons of home recordings.  I also played in bands with friends, doing terrible covers and a few originals.  That was really noisy Punk stuff.

Your music is deemed to be “electronica” due to the instruments you use but I get a strong feeling of Jazz DNA in there. Are you a fan of Jazz and if so, do you feel it has influenced you in any way?

Not so much a fan of what people may recognize as “traditional Jazz” but maybe there’s an awareness to keep the spaces between one kick hit and snare hit sounding busy.  I makes tracks 1 bar at a time and try to throw as much into one space as possible.  I was a big fan as a teenager, still am a fan, of Squarepsuher’s stuff so maybe I’m inadvertently channeling some of them weird Jazz time signatures via that influence…?

You also seem to enjoy many genres and are not too bogged down in one form. Is it important to you that you keep throwing myriad styles into your productions? Will we ever see a straight four-to-the-floor album from you?

Yeah i really like the idea of making music that essentially sounds like skipping through a diverse records collection.  Bits of guitars, loud drums, quiet electronics, all genres.  Speeded up.  Throw it all together.  You’ve got ‘Conformist’.

It’s really unlikely that I’d do an entire album of 4/4 bangers!  To me it’s not challenging.  If something is easy….why do it?

Many people may find your music a difficult listen due to the extreme time changes, harsh sounds etc, do you ever consider making a more straightforward style of music or is it more important to you that you stick to your path and create anything you feel represents you as an artist?

I don’t want to make music for money and I’ve never been swayed by anything anyone else thinks so I’ll push on and if people like it or not isn’t important to me.

When did you start work on Lifestyle Bible?

If was mixed during the period of November 2015 to June 2016 but with the exception of two of the tracks, the songs have been written for about four or five years, most began during the time i was writing the first album Paid To Fake It.  For Conformist, tracks to tend to be created over a really long period; months, years even. I actually hate the idea of releasing a song which hasn’t taken an age to create. I just couldn’t make a Conformist song in a day.

Was it a straightforward album to make or were there times where you were struggling for direction. The reason I ask this is because you seem such a strong willed and confident artist and I wondered if you ever have doubts when creating your music?

I only move forward on a track I may be working on when i feel that’s I’ve exhausted every possible avenue I can go down.  I’m not Calvin Harris trying to write ‘Holiday Pop’ hits for Radio 1 so I don’t have the worry or doubt of writing to expectation.  You become a better artist when you stop chasing other artists and start caring less.  It frees you up to experiment more.

Is there a theme running through the album, hidden narratives maybe?

Not in the sense of a concept album story but yes there is a ongoing themes which are touched on; the ‘dumbing down’ of society on tracks like “Rock n Roll Dead Man” and “A Snake Eating Its Own Tail”, the ‘low common denominator Saturday night booze n’ Take Me Out on the TV with takeaway lifestyle” that a lot of people have and are content to not want more; “Life! Death! Prizes!” is inspired by that.  And that title came from a slogan on the cover of that terrible Pick me Up magazine!

The album as a whole is basically where I think we are at in 2016.  A fucking mess.

You are a fiercely independent artist, is this important to you? Would you ever sign to a label? Someone like Warp would be a good fit for you.

To be honest that comes out of having no other choice but to be totally independent.  I’ve never been approached by any labels or had any offers to sign deals.  No interest at all actually.  A management firm expressed some interest a few years ago but it went nowhere.  I’ve actually contacted all of my favorite labels, including Warp, after my first album had come out and done pretty well review-wise to see if any would be interested in putting out Lifestyle Bible but had I  no responses.  That’s just the way it is and I wasn’t shocked to be honest.

So I’m not closed to the idea of being on a label, far from it.  But as it is, I just do everything myself.

When can we see you performing the album live?

The next Conformist gig is on the 8th November at Clwb Ifor Bach in Cardiff.  Beyond that I’m hoping to do a few bigger support slots which we’re currently trying to finalize.

What’s next for Conformist?

A new EP in Spring 2017 and possibly a remix EP too.  Then another album at the end of 2017.  Hopefully some touring and festivals inbetween them.

Thanks for taking the time to answer these questions Michael.

No problem at all.

‘Lifestyle Bible’ is out now via Consumer Consumer Records