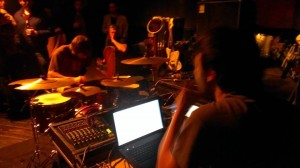 Back in March 2014 Shitwife were featured as a LTW ‘New Band of The Day’ – this followed their mind-blowing performance at the sadly defunct British Wildlife Festival…excitement is now building as Shitwife have confirmed the release of their debut album.

Louder Than War are delighted to exclusively premier the first track from the album; we suggest you take small children, pets and the infirm to a safe area, as far away as possible from the sound system, crank the volume to high, and press play!!

Shitwife are a mind expanding kaleidoscope of live and manipulated sounds – a brutal culmination of breakcore, noise rock and post-hardcore brought together by Wayne Adams (Laptop) vs Henri Grimes (Drums) who also run the side projects Ladyscraper, Shield Your Eyes and Death Pedals.

In the live arena Shitwife are simply breath taking, Adams essentially assaults his bank of electronics, whilst Grimes stripped to the waist pummels his kit…together they produce a sound akin to a squadron of B52’s carpet bombing the latest threat to the good ol’ US of A…think of Arari Teenage Riot, the raw energy of Lightning Bolt, and the sonic genius of Aphex Twin – enjoy!