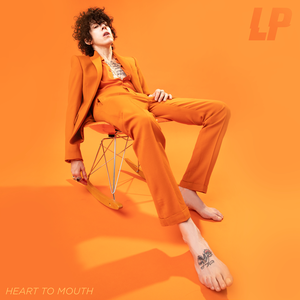 Laura Pergolizzi, better known as LP, has collaborated with a range of artists in the pop world, including Rihanna, Christina Aguilera, Linda Perry and Leona Lewis. For a while it looked as though the songs she had written for other artists would outshine her own recordings but that all changed with the song ‘Lost on you’, a massive European hit for her in 2015. Heart To Mouth, her fifth album, was released in December 2018 and is a slightly more brooding affair than her previous works have been.

Given that she has collaborated with a lot of high octane pop divas, it’s something of a surprise to discover that she often sounds like Stevie Nicks, albeit with a higher vocal range. This is particularly the case on twangy opening track ‘Dreamcatcher’, a slice of Americana which has all the atmospherics of a a haunted prairie. ‘When I’m over you’ is a rockier piece, but it’s equally vivid, and is a good song to dance to. The single ‘Girls go wild’, in common with a lot of indie rock and indie pop these days, has a certain Tango in the night feel to it, but it also possesses a wryness of tone that places it near to Lana Del Rey territory.

LP is far from being a one trick pony, and her influences range beyond California soft rock into blues and R’N’B territory on ‘The Power’. There’s also ‘Hey nice to know ya’, a banjo led song with basic beats and the energy of Jagged Little Pill era Alanis Morissette. It’s a song that builds up the sonic layers gradually, becoming quite a tour de force in the end, and it has future single written all over it.

‘Recovery’, which has already been released as a single, is a breakup ballad, and LP does not hold back. Often a power ballad can feel overwrought and insincere, theatrical and a bit cold and performative in nature, but that’s not the case here. It is a tour de force, finely balanced and well delivered.

The biggest surprise comes with ‘Shaken’, which opens with synths but which feels like an homage to 1960s girl singers such as Lulu and Kathy Kirby. It also has a classic pop shimmer that would place it somewhere in the vicinity of Basia Bulat’s 2016 album Good Advice. Essentially, this is probably what Saint Etienne’s ‘You’re In A Bad Way’ might have sounded like if it had been raised in the Brill Building on a strict diet of later period Supremes.

This vivid and multi faceted album concludes with ‘Special’, a song that starts like a garage rock record; all distorted guitar, snarling and blurred sounding vocals mixed way back in the multi tracks of the mix. A softer guitar sound then takes over and ‘Special’ turns out to be quite a complex piece, drawn out and with driving beats. It makes a good finish to an album that has packed a lot in, and suggests good things to come in the future.