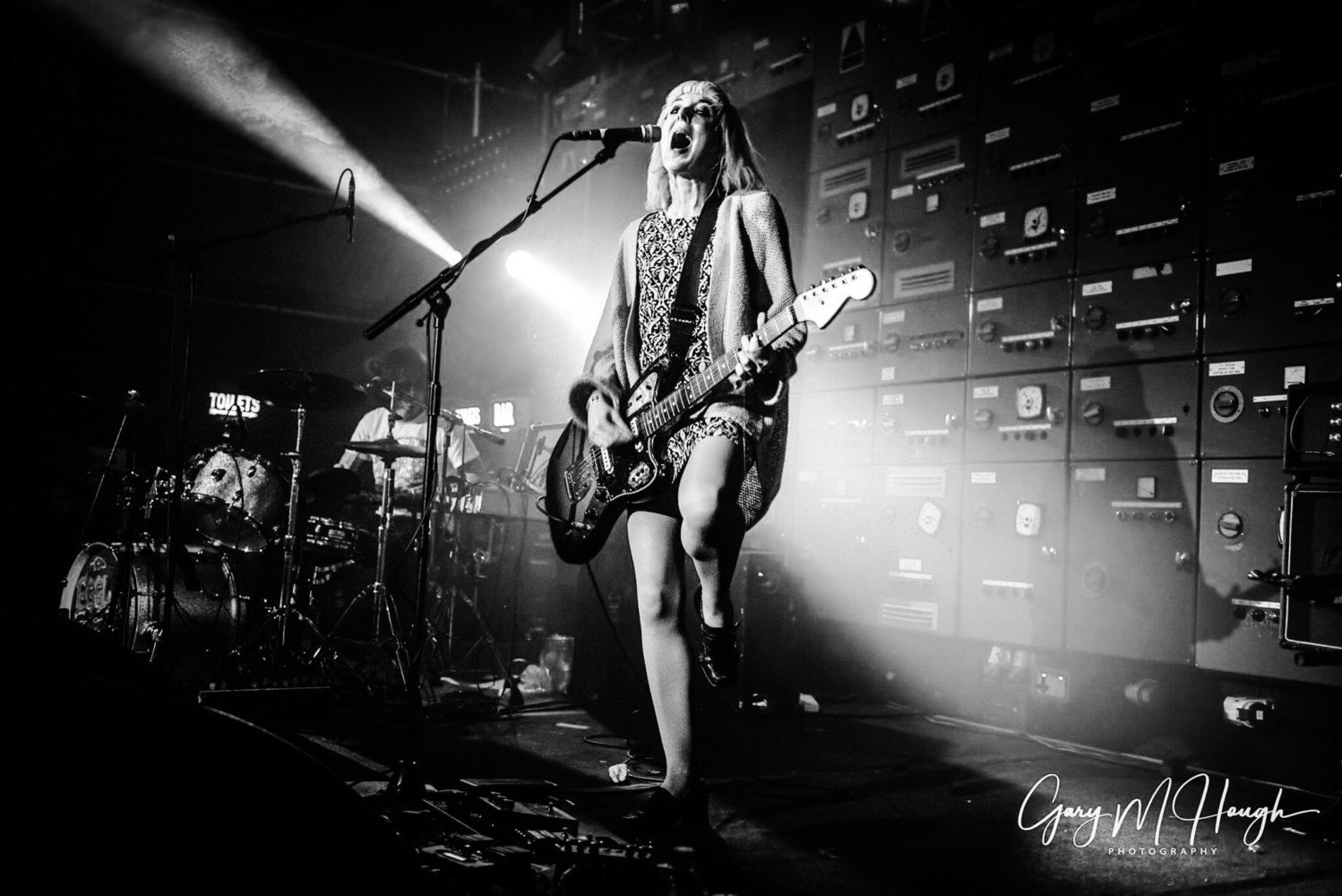 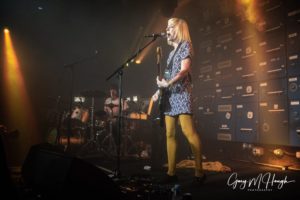 The Lovely Eggs took to the stage of a long sold out and furnace hot Gorilla venue; despite hailing from near neighbour Lancaster, Manchester has become almost their second home, in a similar fashion to The Stranglers it is becoming habit for them to conclude tours in the city…something about the city being up for a party according to Holly as she stepped out onto the low stage.

Holly and David last headlined Manchester back in February, immediately ahead of the release of ‘This Is Eggland’ an album that will undoubtedly be littering the Top 10 placings in the soon to arrive end of year polls – nine months of touring the release has seen them elevate the albums already heavier tone into a seething behemoth, and tonight ‘The Eggs’ made sure they delivered with relentless gusto.

Davis wearing a Save Lancaster Music Co-Op T-shirt has positioned his compact kit stage right, set 90° to the audience and facing wife Holly, who raises the customary can of Strongbow before launching headlong into ‘I’m’ With You’, the familiar dirty fuzz drenched guitar is ramped up to its very maximum, David responds accordingly with pummelling motorik tinged beats which instantly ignites the crowd, the entire front section are bouncing along and into ‘Witchcraft’ which has a darker threatening vibe not evident on the album; Holly dispenses with her loose cardigan to reveal a psychedelic patterned dress that easily rivals the bands favoured Casey Raymond sleeve designs as she stalks the front of the stage, there is an air of menace about The Eggs tonight, Holly seems determined to rid herself of all those now hackneyed ‘odd couple’ jibes as she screeches the opening lines of ‘Dickhead’ before realising she has snapped a sting, it matters not a jot as she tells when the songs reaches its clattering conclusion…” I only use the bottom two anyway” as David hammers away ahead of Holly bellowing “I shouldn’t have said that—it was evil of me!” and a wave of guitar filth and interplanetary noises wash over the venue; 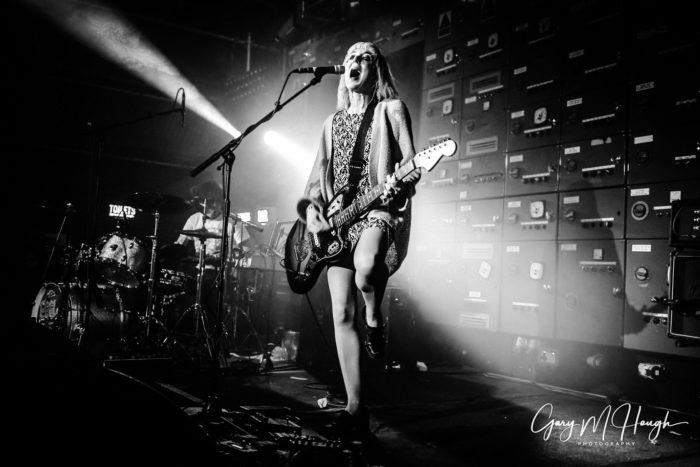 Holly pinballs the stage, occasionally pausing to wrap herself around her Fender Jaguar, leading the party goers into the psychedelic ‘Magic Onion’ – there is a mention of the campaign to fight Lancaster Councils plans to demolish the Musicians Co-Op, and a simple request to help with fund raising ahead of ‘Eggland’ opener ‘Hello, I Am Your Sun’ with its Teletubby vocal distortion alongside a bass so cavernous its threatening to collapse the building; the gig has become a celebration of the bands achievements, with both Holly and David smiling so much she almost stumbles over the lyric… the perfect introduction to band anthem ‘Fuck It’ – the crowd are bouncing, there’s beer and bodies all over the place, arms aloft waving ‘fuck it’ emblazoned scarves – The Eggs came to party and they are delivering in full effect.

‘Big Sea’ returns us to ‘Eggland’ along with a savage and raw ‘Would You Fuck!’ the lyric literally spat out, ‘People Are Twats’ allows us to draw breath before a tumultuous ‘Return of Witchcraft’, Holly is crouched over her guitar, blinding white strobes penetrate the chaos as the night builds to a joyous climax; there is no encore – that’s an ‘Eggs rule the sweat drenched crowd are well aware of.

The Lovely Eggs wrapped up their 2018 with this blistering performance, it was boisterous, exhilarating and full of unbridled energy and entirely encapsulated everything about ‘The Eggs’ – magnificent.

The Lovely Eggs are supporting the campaign to Save Lancaster Musicians Co-Op; visit the Campaign Page for information and to donate.