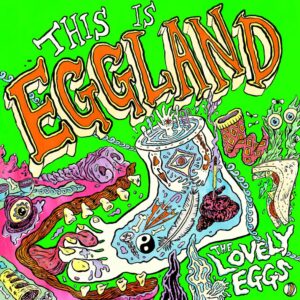 The retina shredding psychedelic sleeve courtesy of Casey Raymond gorgeously hints at the content of this, the fifth album from Lancaster based husband and wife duo The Lovely Eggs.

The album, once again entirely created by the pair and recorded within a local collective run studio, their own home, and released via their own Egg Records imprint – it’s this total DIY ethos that has allowed them over time to hone their sound to a point where they are now able to release this explosive masterpiece.

This Is Eggland with its less than cheeky nod to Shane Meadows’ TV series, This Is England begins with Holly’s distorted voice intoning “Hello, I am your Sun…Hello, I am the Sun” – the album being her and David’s comment on the current state of the country, then encouraging people, as The Lovely Eggs have actually done – to construct their own worlds and create their own reality as we journey through troubled times. 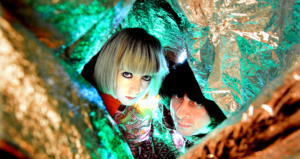 To achieve this alternate reality The Lovely Eggs took the decision to work with Grammy award winning producer Dave Fridmann (Mercury Rev, The Flaming Lips), and I’d suggest its his inclusion that has seen the band transform their previous quirks and goof-ball antics into a genuinely potent head-spinner, driven by almost motoric krautrock beats, blitzed out 60s psychedelia, and raw “fuck you” punk rock attitude; Fridmann has somehow brought discipline and transformed the basic, raw Eggs template.

Hello, I Am Your Sun closes with Holly’s voice being stretched to a single note, imperceptibly mixed into a guitar, extended then stuttering into ‘Wiggy Giggy’ with its almost tongue twister looped vocal forming the foundation of the track, Holly’s vocals are so much stronger; she is actually singing, much more reminiscent of her days in the equally excellent Angelica, there are some deft guitar riffs adding colour, all the while a precision beat keeps the pace up, competing with all sorts of layered bleeps, bangs and sonic wizardry, the track taking on an almost tribal vibe as it draws to an end…Dickhead invites you in with a coy garage tinged guitar lick, before imploding as befits the title into a very welcome 180 second rage, similarly the lead single I Shouldn’t Have Said That  sees The Lovely Eggs evolving their sound; this is much darker than anything they have done before; this album is physical, you can feels sinews flexing, muscles straining – it’s a rich, expressive sound that steals from Hawkwind for I’m With You a relentless slash and burn guitar, overlaid by the sweetest vocals addressing being genuine music industry outsiders before dropping away in trademark Eggs style to add kazoo’s to this sonic cauldron!

Repeat It does exactly that, the looping vocal of the title “on and on, and on”, a mass of swirling effects, and metallic noise held in place by the pummelling drum refrain…Witchcraft hits equally hard, cymbals crashing around, a joyous blaze of kaleidoscopic colour that leads into ‘Let Me Observe’ possibly the standout track of the entire album, and yet it’s the track least likely to win any new friends, its barely a song, more a keyboard pattern lifted from Telekon era Numan, a fog of darkly ominous guitar filth melting into waves of distortion, all entwined with a simple drum pattern which allows Holly to deliver her most harmonious vocal to date; she even loses that infamous Lancastrian twang as she floats ad-infinitum “let me observe” to a clear 2min 50 when the track begins a glacially slow fade out not concluding for another 2mins, stretching a songs structure to the point when it should surely collapse; it’s pure ‘we do it because we can’ Lovely Eggs, the same incendiary attitude that allows ‘Would You Fuck’ a battering ram of a tune, dripping in malevolent rage and indignant Northern vocals to conclude proceedings.

Lovely Eggs have without doubt created one of the stand out albums of 2018; the antidote to the utter dross clogging up the radio stations; these are giant climactic songs, complete with arching melodies and born bad bass that rattles in your chest – its only two months in, but This Is Eggland really is that good.