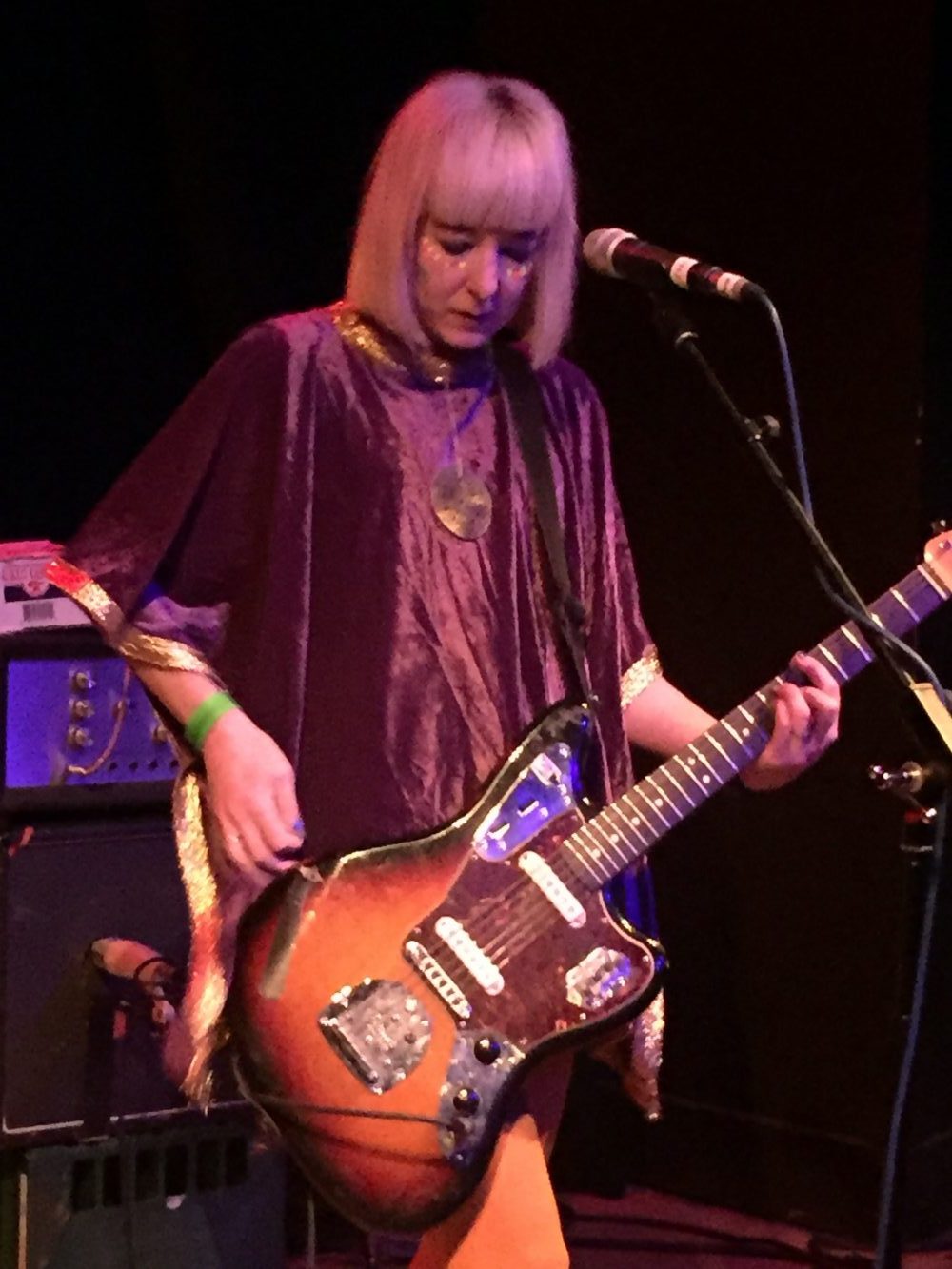 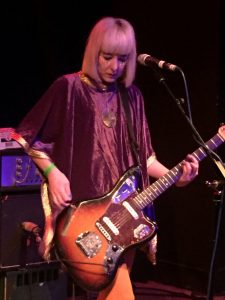 The Lovely Eggs
The Band On The Wall, Manchester
Saturday 17th February 2018

(The Lovely Eggs have been added to the line up of The Membranes & Friends to play The Ritz, Manchester Sat 5th May 2017 alongside the likes of The Cravats and Evil Blizzard; the LTW Shop has tickets in stock now.)

Bands have ‘their time’ – now is surely The Lovely Eggs time?

Tonight they appear at a capacity Band On The Wall, the final night of a 10 date sold out tour ahead of the release of their fifth album ‘This Is Eggland’ (LTW review); it’s heaving in this legendary venue, many of the eager crowd sporting Lovely Eggs ‘Fuck It’ scarves to welcome Lancaster’s finest couple onto the low stage; both David and Holly are wearing Primark variants of Hogwarts cloaks, though theirs are in slightly more psychedelic hues; to accentuate the trip they each have luminous paint and glitter daubed across their faces; Holly raises a can of Strongbow, welcomes the masses then launches into a firestorm of motoric beats, gnarly riffs and all manner of sonic weirdness.

‘I’m With You’ lifted straight from ‘Eggland’ is huge, an immense wave of sound that threatens to drown out Holly’s soaring vocals; she pinballs the stage, spinning frantically , her cloak swirling as she thrashes the very life from that poor Fender – the entire front section of the audience explode, celebrating the joy of seeing a totally DIY band succeed on their own sometimes slightly odd terms.

There is nothing genre re-defining about The Lovely Eggs sound, its simple guitar and drum but delivered with utter joyous abandon; not surprisingly the set pulls heavily from ‘Eggland’ – we get a ferocious version of ‘Witchcraft’ following the song breakdown David’s pummelling of his kit is something to behold, which leads us perfectly into the current single, yes that one that’s getting rotation play on 6music, the mighty ‘Wiggy Giggy’, the dual repeated vocal title that assumes an almost tribal feel, before Holly really pushes her vocal to its full capacity – this is the key to ‘Eggland’ the previous kooky antics have been replaced with a level of discipline and benefit greatly for it, the drums relentlessly hammer away, the buzzsaw guitar shreds the venue while Holly’s implores “Spaceman take me out to a place that I don’t want to go”, similarly with ‘Big Sea’ (one of the strongest tracks from ‘Eggland) a boiling cauldron of vivid colour washed sound, that relies on all manner of triggered audio weirdness; imagine Metal Mickey repeatedly punching Bleep & Booster to a soundtrack of Sonic Youth and you are just about there!

Five albums in and The Lovely Eggs are only now getting into their stride, it shouldn’t be this good – they have no label support, no agents; they should have been battered into submission by ‘the industry’ – granted Holly acknowledges the strains of touring with a 4yr old…and David, has made her tired; she is suffering with a heavy cold but none of that blunts the savagery of ‘Magic Onion’ from the previous ‘This Is Our Nowhere’ album…a primitive head swirl that goes “on, and on, and on, and on”, before we are treated to ‘Goofin Around (in Lancashire), a riotous paean to the apparent utter monotony of a life lived in Lancaster. 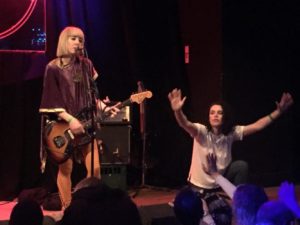 The stuttering ‘People Are Twats’ will never lose its appeal – this really should be administered on the NHS; the entire venue is bouncing, a sea of gurning sweat glistening faces listening as Holly leads them on a meandering tale referencing David’s OCD; all to do with the previous nights gig at The 100 Club and his middle of the night paranoia that resulted in 3 hours sleep, and he journey to Manchester commencing at 5AM…its best not to ask, just accept this is The Lovely Eggs life, this band and their ‘Fuck It’ attitude which tonight almost takes on anthmic status; the audience, arms aloft unfurl the scarves, hollering every word, hurling themselves around as the song builds, we had expected ‘Panic Plants’ but T’Eggs don’t ever do what anyone expects!

Closing with the snarling retort of ‘Would You Fuck’ – a maelstrom of melting sounds barely held together by the krautrock tinged drum; Holly sneering “Would you fuck” as a statement, a question, an opinion…150 seconds, a searing assault on the senses, which as it crashes to an end both Holly and David raise their beloved Strongbow to the exhausted crowd, their smiles matching those of their audience…now is very much the Eggs time!!