Home News The Lovely Eggs Announce special edition of This Is Eggland... 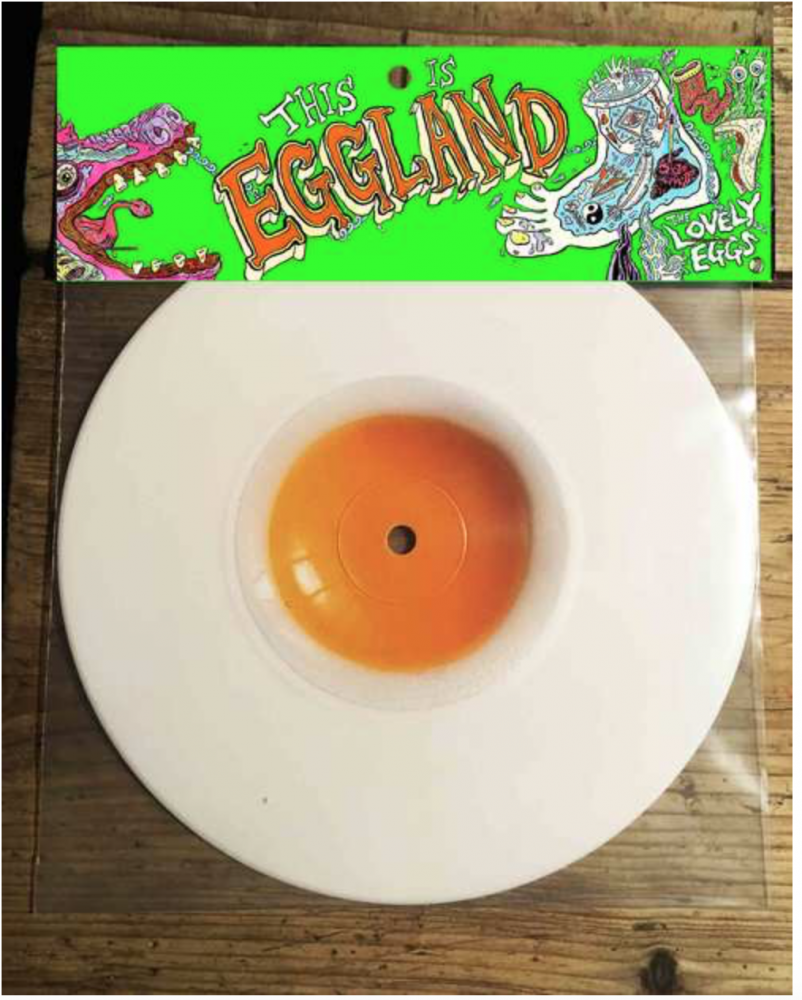 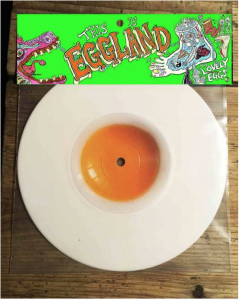 The Lovely Eggs   Announce special edition of This Is Eggland For Record Store Day on 21 April.
On special fried egg vinyl, limited to 500 copies in hand packed sleeve
The band also play the Membranes and friends festival in Manchester on  Saturday may 5th with the membranes and their 20 piece choir, Evil Blizzard, The Cravats, One Sided Horse and Sink Ya Teeth.
Tickets for this special gig from here. Facebook page for this event here.
The Lovely Eggs have announced that they will be releasing their brand new mind-melting new album This Is Eggland on limited edition fried egg vinyl, especially for Record Store Day on 21 April. Limited to an eyewatering 500 copies, the LP will appear in a special hand packed sleeve, designed by the band with the giant fried egg in its own polythene display sleeve with a uniquely designed cardboard top. This is a true gem for any collector.
Having played at Huddersfield’s Vinyl Tap Records as part of their Record Store Day announcement celebrations yesterday, The Lovely Eggs will also be playing an instore on Record Store Day itself at Rough Trade in Nottingham.
With the country in the grips of Egg-mania following their sold-out tour in February, The Lovely Eggs have also announced the supports for their forthcoming May dates, with Mr Ben & The Bens returning as firm favourite of the band (and endorsed by 6 Music’s Marc Riley). Whilst Phill Jupitus as Porky The Poet graced their recent shows, this time they’ll be taking out comedian and poet Rob Auton.
This Is Eggland confounded expectations by being music industry outsiders The Lovely Eggs’ first foray in to the UK charts, with the album hitting number 9 in the UK Independent National Album Chart, it also made it to number 23 in the UK Vinyl Charts and overall they were number 136 in the UK National Album Chart – although, had they not sold the album direct to fans via their website and gig before release day, they would have been in the top 45! Their single “Wiggy Giggy” was number 8 in the Official Vinyl Singles Chart. The album CD has already been repressed twice and the vinyl once since its release a week ago. This is all without the help of management, booking agent or record label support. 2018 is set to be the year of the Egg!

The Lovely Eggs are one of the most unique, innovative and genuine bands on the British Underground music scene. Heavier and more in-your-face than anything they’ve done previously, Holly Ross (guitar/vocals) and David Blackwell (drums) bring together a fierce DIY ethos, surreal sense of humour and kitchen-sink realism. Working with a producer for the very first time, Dave Fridmann (Mercury Rev, The Flaming Lips) lends his magic dust to bring out the best of The Lovely Eggs’ explosive blend of motoric krautrock, 60s psychedelia and punk rock attitude. They create their own world and invite us to join them in Eggland.
The album title is a cheeky nod to Shane Meadows’ series, This Is England. It is a comment on the current state of modern Britain. The album is about being an outsider and doing things differently, eschewing society’s conventions as they have done. Since having their son in 2013, the pair have taken him on tour with them, racing round the UK with 2 fingers up to conventional family life firmly out of the window. They have also remained in their hometown of Lancaster, despite its cultural and geographical isolation. As Holly explains; “On this album we’re saying it’s OK to live life differently, we’re doing it and you can do it too! “Living up here in Lancaster is kind of mad. It’s a bit like the Twin Peaks of Great Britain.” The town has a rich history of the witchcraft, notoriously it was where the Pendle witches were hanged”.
For the first time ever, the pair worked with a producer on the new album, welcoming in legendary Grammy award winning engineer Dave Fridmann to their world. “We received an email from Dave Fridmann. He had got our answerphone message, listened to our stuff and wanted to work with us. It was just totally bizarre!” The album was self-recorded at Lancaster Musician’s Co-op and the Eggs’ own house. Dave Fridmann then produced it remotely. They then went out to Dave’s Studio in New York State, for mixing. The result is a gratifyingly rich sounding record, which still retains the raw energy of the band’s sound but harnesses a real power and dynamism. It’s much heavier than anything they’ve done before. As Holly says: “It’s pretty relentless. It kind of sounds like a chip shop on fire. We still write about everyday life and the stuff that goes on in our world, it’s just the new album is more fierce”.
The band have built up a cult following, selling out gigs across the UK, as well as gaining support from 6 Music and Radio One. This Is Eggland was 6 Music’s album of the day and the single “Wiggy Giggy” received a tremendous response from radio and was added to the BBC 6 Music playlist. Steve Lamacq stated, “I can’t get enough of this record at the moment,” and made it the “Lamacq livener” (where it has been played every day for a week). It went on to win Roundtable and was the most popular track on both Steve Lamacq and Marc Riley’s show on consecutive weeks. The pair played their seventh live session for Marc Riley on Tuesday 6 February.
This Is Eggland is a giant leap forward in their wild-ride of a career. The album is like listening in on The Lovely Eggs’ own secret world, with philosophical songs about the mysteries of the universe (“Hello I Am Your Sun”), to abandoning “ the grass is always greener” mentality (“Wiggy Giggy”), to being on the wrong side of society or the music industry (“I’m With You”) and several inspired by local witchcraft. Unashamed to be themselves and have fun while they’re at it, The Lovely Eggs weave an intoxicatingly magnetic magic spell and we’re helplessly and willingly falling under it.
Watch video for “Wiggy Giggy” here:
https://youtu.be/H65Ifm9LzIQ
Watch video for “I Shouldn’t Have Said That”
Directed by Casey Raymond
https://youtu.be/-HXmAleNWBU
Pre-order This Is Eggland
https://smarturl.it/ThisIsEgglandAppleMu
https://smarturl.it/ThisisEgglandSpotify
www.thelovelyeggs.co.uk
www.twitter.com/thelovelyeggs
www.facebook.com/thelovelyeggs
www.instagram.com/thelovelyeggs