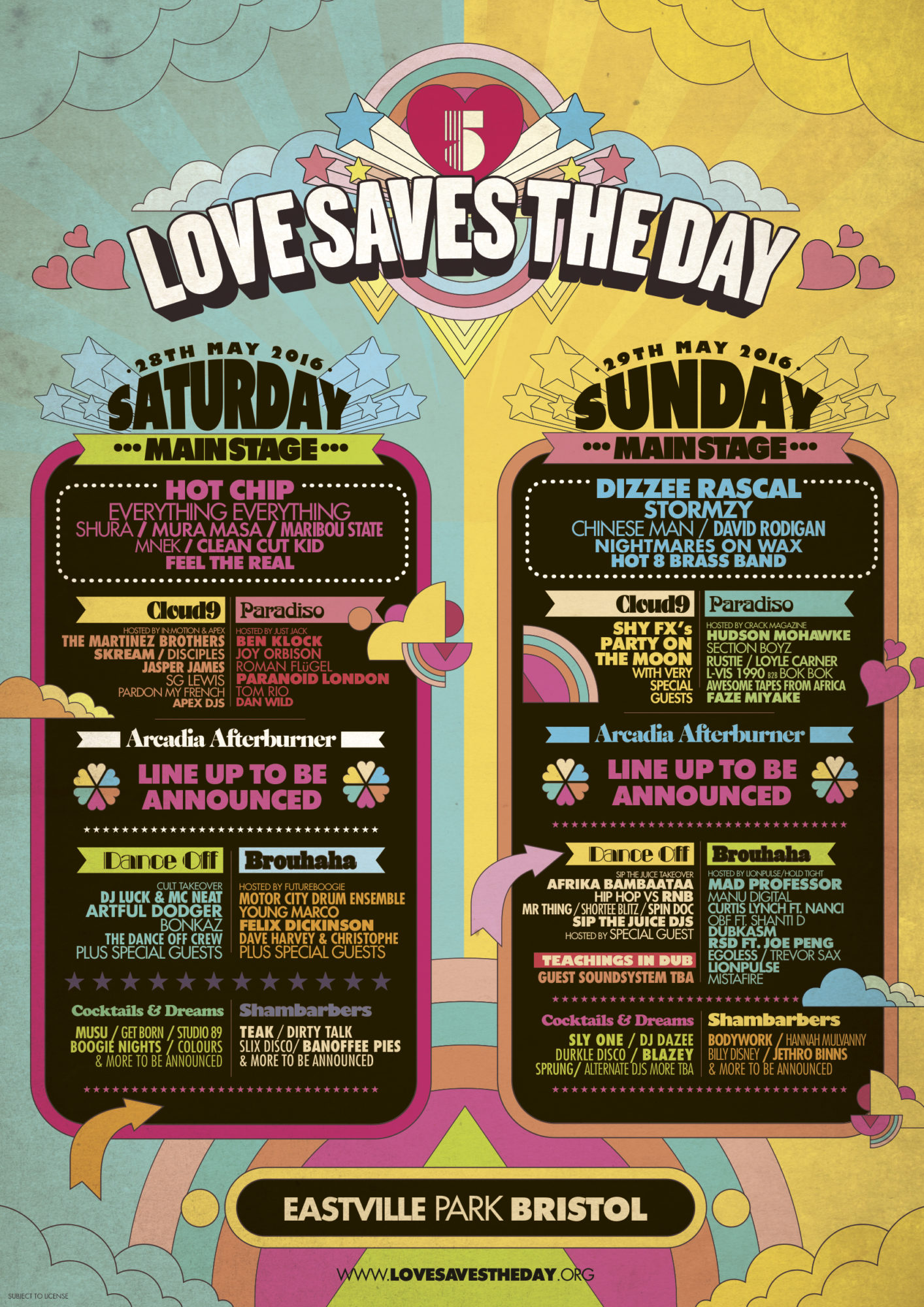 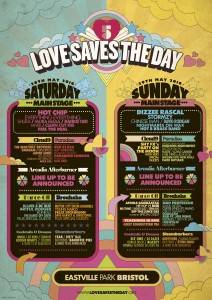 Saturday 28th May – Love Saves The Day have announced their line-up for 2016. Taking centre stage as Saturday’s headliner will be the acclaimed London-based electronic pop group Hot Chip. Everything Everything, the genre-defying indie rock outfit based in Manchester will also be present, alongside BBC Music’s ‘Sound Of 2016‘ hot pick Mura Masa, electronic music duo  Maribou State, and Shura, who will bring her hugely impressive catalogue of songs to the Love Saves The Day Main stage.

Other names on the bill for Saturday include American duo The Martinez Brothers who will be leading the proceedings on the Cloud Nine stage, alongside the hugely popular Skream, contemporary London-based trio Disciples, and Phonox Club resident and man of the moment Jasper James.

Elsewhere, The Dance Off stage will be headlined by the long standing house and garage duo DJ Luck and MC Neat, garage legend Artful Dodger and grime act Bonkaz an artist who has been hailed as one of the key players in the recent grime revival – plus some very special guest to be unveiled.

Sunday 29th May – Day two of the festival welcomes Dizzee Rascal, an artist who’s music spans grime, UK garage, bassline, British hip hop and R&B, known for his high energy hits including ‘Fix Up Look Sharp‘ and ‘Dance With Me‘. Winner of 2014’s Best Grime Act at the MOBO awards Stormzy will also be joining on the Sunday, along with Soundclash champion David Rodigan and the hypnotising Warp Record’s artist Nightmares On Wax.

From LuckyMe and Warp to TNGHT and Kanye West collaborations, Love Saves The Day also welcomes the highly successful Hudson Mohawke, who will headline The CRACK Stage along with a host of impressive music heavyweights, including the US based African cassette collector, blogger and DJ Awesome Tapes From Africa and Glasweigan producer Rustie. Bristish rapper Loyle Carner will also take to the CRACK stage along with London-based rap outfit Section Boyz.

Chinese Man, carried by the French Chinese Man Records label will bring the sound of hip-hop, funk, dub, reggae and jazz to Love Saves The Day Sunday, in addition to the renowned remixer Mad Professor, and bass player and producer specialising in digital reggae Manu Digital. After curating his own stage in 2015, Shy FX will be back to host the Cloud 9 stage, with very special guests still to be announced. Elsewhere, Sip The Juice take over The Dance Off stage on the Sunday, with Afrika Bambaataa leading the proceedings.

Love Saves the Day will also feature the only appearance of the Arcadia Afterburner in the UK this year. The original Arcadia installation, the Afterburner is a 360 degree stage built around a central flaming spire with dance platforms radiating out to a ring of exploding lamp posts. Having appeared at festivals as far afield as New Zealand, Croatia and the United States, and a staple at Glastonbury, the Afterburner is returning home to Bristol to bring the fire to Eastville Park.