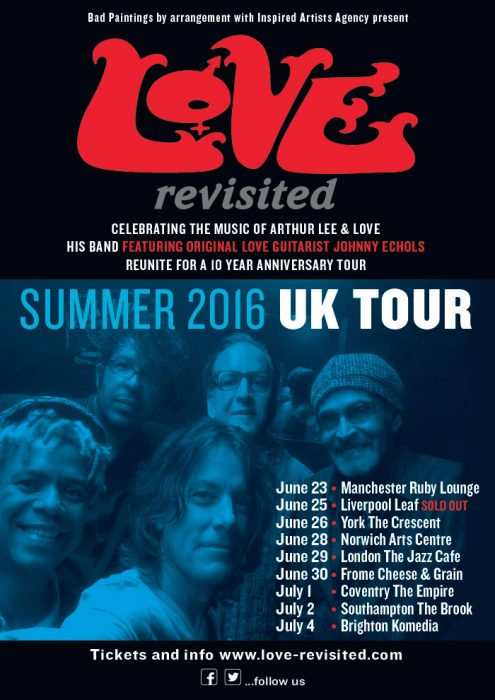 Members of the last incarnation of Love reunite to commemorate the 10th anniversary of the passing of Arthur Lee. Louder Than War’s Craig Chaligne reviews.

Arthur Lee passed away in 2006 after battling Leukaemia. He left behind a wonderful back catalogue and was thankfully able to enjoy critical acclaim in the last 4 years of his life touring the world and playing the Forever Changes album to sold out audiences. The band that was gracing the stage of the Jazz Cafe tonight toured with Lee from 1994 till 2005. They feature in their ranks, original Love guitarist Johnny Echols that played on the Forever Changes album and was a mainstay of Love’ s line-up from 1965 till 1968 linking the Love Revisited to the original incarnation of the band. The setlist with the exception of a truly great version of “August” from 1969’s excellent Four Sail LP was centred around the band’s first three LP’s with Forever Changes played almost in its entirety (only the Bryan MacLean penned “Old Man” was absent). In a situation similar to the Brian Wilson backing band with The Wondermints, Love’s last line-up was composed of members of Los Angeles band Baby Lemonade. The task of singing Arthur’s lead vocals fell to Rusty Squeezebox who did an admirable job of paying justice to the songs without attempting to sound like Lee. Bass player David Chapple took over lead vocals for “Bummer in The Summer” while maintaining a steady groove with his rhythm section colleague David Green. The show was a noticeably more hard rocking affair than the Forever Changes Concert at The Royal Festival Hall that’s widely available on DVD. The band’s 3 guitarists expertly replicated the main melodic lines from the orchestral parts on guitars to great effect (special mention to Mike Randle’s great guitar work). This care for detail in the arrangements plus the buzz of a band returning to the UK after a ten year absence made for a truly excellent show.

An audience of dedicated fans cheered deeper cuts and the “hits” in  equal manner. Rusty joked that the least they could do in 10 years was learn a couple of new songs, their version of “You’ll Be Following” displaying a power pop jangle that greatly improved the original (author’s subjective opinion of course…). Johnny Echols’s incisive guitar playing skills remain intact and he also sang lead on a shortened version of “Revelation”, the jam that occupied the whole of the second side of Da Capo. Rusty quipped early in the gig that they would only play “7 And 7 is” last as they wanted us to stay for the whole gig and they duly delivered with a urgent version of Love’s best known track.