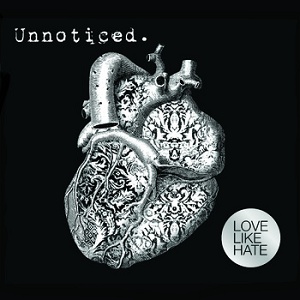 Great band name, great record sleeve, there’s a bit of a buzz about Love Like Hate in Australia at the moment and it’s pretty easy to see why. They have a brand of pop that is both catchy and slightly off kilter and it’s nice.

The female duo of Heather Cheketri and Sonja Ter Horst make appealing noises which are a hundred times better than the majority of the trite in the charts and clearly have an ear for a catchy tune or two.

Opener Electric Ships has a memorable chorus, but the track is disjointed. The verses, bridge and chorus sound like they’re from three different tracks and the jumps to each just don’t seem to fit. It’s a shame when the leap to chorus just sounds wrong and mistimed as the song itself holds a lot of promise.

Bright Eyes bears uncanny resemblances at times to Tom McRae’s Stronger Than Dirt and that’s no bad thing. The extremely talented singer songwriter can also belt out songs of the highest order when the mood takes him.

Since forming in 2009 the band have had good success in their homeland (where their music has been featured on both radio and television) and also in America. With the title track form the EP (see video premiere here) it’s easy to see their appeal as it builds from a lone piano and voice to a pulsating almost anthemic end.

There also seem to be similarities to Swedish 80s duo Roxette in that the effectiveness and construction of their songs is very well executed. Perhaps where they really need to be is in the same bracket as Brighton’s Bird Eats Baby where pop meets alternative Goth, and where they would be very comfortable.

Penultimate track List is possibly the EP highlight as a sweeping chorus and subtle instrumentation compliment the voice superbly. It rises from near silence to a successful hook and instrumentally is arranged perfectly.

With closer Ride This Down is another well executed dark pop ballad where guitar spurts are allowed to intersperse with another rousing chorus and delicate backing. There’s promise with Love Like Hate which could soon see them accepted outside of Australia sooner rather than later.