Home News We Love Green : new festival in Paris with great line up... 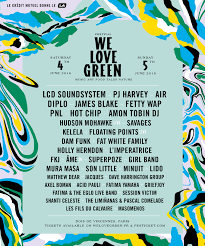 We Love Green is not only Paris’ best new festival, it also has designs on saving the world. Set in the bucolic loveliness of Bois de Vincennes in the east of the city, the Because Music-curated music event is fiercely sustainable and has all the best bands too.

If you’ve ever been to a weekender in a field and been depressed by all the litter and the polluting of rivers, then We Love Green is seeking to change all that. Anti-waste gastro food trucks and foodie legends like the Freegan Pony people, 42 Degres and Pierre Sang will all be on site.  As in previous years, all the food vendors have been hand-picked by a jury based on their proposals to reinvent campsite gastronomy using organic, ethical, local and seasonal produce.

We Love Green will also be hosting the Think Tank stage, featuring renowned Danish-Icelandic installation artist Olafur Eliasson, Mexican architect Fernando Romero, Demain director Cyril Dion, as well as playing movies like Cowspiracy. Talks at the Think Tank stage will include: The economy is changing: for better or worse?, Man Vs Wild: Can man and nature get along? and Taking action: from growing awareness to getting involved.

“What sets We Love Green apart from other festivals is its uncompromising commitment to sustainability and its dedication to promoting debate and the exchanging of ideas,” reads the blurb. “Far more than just a music festival, We Love Green strives to be a catalyst for change by inviting scientists, artists, activists and iconoclastic thinkers to its Think Tank stage.”

Add to the music, the food and the food for thought, the mise-en-scene of Bois de Vincennes’ English landscape garden, botanic garden and four lakes, should also not to be missed. And it’s only a bus ride (and possibly a ferry) away.