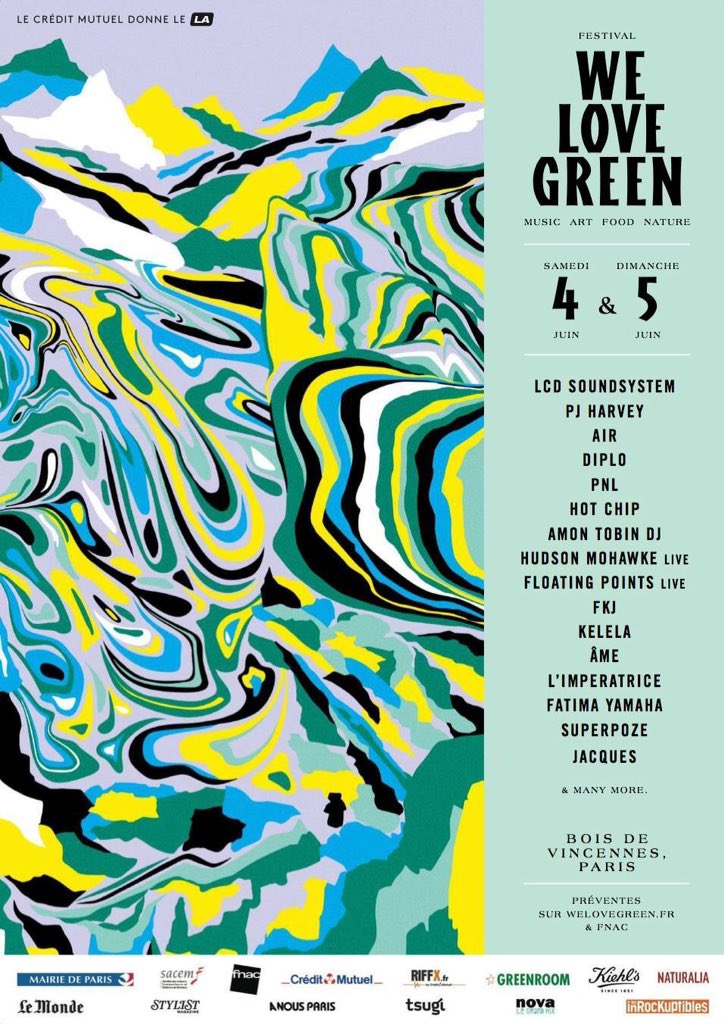 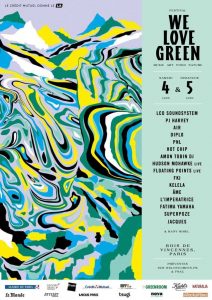 The road to hell is paved with good intentions, and that certainly seems to be the case when we arrive at the Bois de Vincennes for We Love Green, Paris’ premier sustainable festival. A week of solid rain means there’s far less green and plenty more brown on site – but hey, it’s a festival – and we’ve all been here before. What we’re not prepared for is broken ticket machines when we arrive, and after being penned in for an hour at the entrance, we eventually scale a fence and jostle for position, receiving wristbands crimped off by a cigarette lighter of all things (another assistant cuts the ribbon as quickly as she can with the scissors from a swiss Army knife, with the restless VIPs glowering menacingly like zombies). Running times are out of kilter, and further disruption leaves many disappointed later on when one of the bars apparently runs out of beer. It’s lucky then that the lineup has been so well thought through – and apart from a last minute cancellation from Fetty Wap for personal reasons – things go almost entirely to plan on the big stages… even if there’s chaos off them.

On Saturday afternoon we catch PNL – short for Peace N’ Lovés – a pair of bad boy brothers from the Corbeil-Essonnes commune in the south of Paris, who’ve brought their entire posse on stage for the occasion. The hip hop duo are clearly not wild about dynamics, ambulating at a pace perfect for a blacked out SUV negotiating speed bumps, but what does startle slightly is the David Sylvian / Ryuichi Sakamoto sample from ‘Forbidden Colours’, the soundtrack to the bleak David Bowie movie Merry Christmas, Mr Lawrence. Today must feel like all their Christmases come at once.

Next up Hot Chip provide the merriment, with some sections of the crowd ignoring the mud and dancing wildly with their wellingtons on. The London-based septet are all but guaranteed to lighten the mood even in the face of adversity, and a finely timed cover of Springsteen’s ‘Dancing In The Dark’ is the perfect prep for headliner LCD Soundsystem (indeed Al Doyle – present in both bands tonight – barely has time to go grab himself a cup of tea).

There was consternation in some quarters when James Murphy announced a reformation, but few second comings have sounded quite this classy. Opening with a rambunctious ‘US V Them’ followed by a blistering ‘Daft Punk Is Playing At My House’, a stunned and tottering We Love Green can immediately confirm that the murmurings coming out of Barcelona were entirely correct… the DFA legends are in the best form of their lives. A greatest hits set on Saturday night will have to tide us over until new material is finally in the offing…

Sunday brings a sparkling and far from ramshackle set from the Fat White Family, who’ve clearly been practicing. The weather is no longer officially shitting it down, but that seems like the most spurious of excuses for Lias Saoudi to strip down to just a pair of blue shorts, not that anyone’s complaining much (well, maybe a few James Blake fans can be spotted weeping into their organic smoothies).

The biggest surprise of the day comes when Savages – a band not exactly known for their bonhomie – bring the weather with them. With all four of them dressed head to toe in black (aside from Jehnny Beth’s white shirt) it’s a wonder they’re not vapourised as the sun comes out (to massive cheers, it must be added). It’ll come as little shock to anyone however that Savages are absolutely ferocious on stage, with the group of punters in front of me letting out audible ‘ohlala’s when Aise’s pulverising bass rumbles in on ‘The Answer’. Few bands pack a mid-afternoon punch like Savages, and it’s no wonder the mighty Iggy Pop exclaimed “I’ve got to follow that?” when he shared a festival bill with them recently.

The dusk slot is reserved for Air, Versailles’ finest sons (well after Louis XIV of course). The French duo have a greatest hits album out, marking 20 years of working together, and the performance at We Love Green is one of only two dates scheduled in France all year. Having emerged from the same scene as Daft Punk, they have plenty in their repertoire to draw upon, but it’s the three Moon Safari offerings at the end of the set that really sets pulses racing, beginning with a deliciously ethereal rendering of ‘Sexy Boy’, complete with Nicolas Godin’s inspired vocoder bassline. ‘Kelly Watch The Stars’ brings a dreamy quality, while the outro of ‘La femme d’argent’ would take the roof off were there a roof.

Little can prepare us for the greatness of PJ Harvey’s set, with the best definitely saved for last. To be fair, if I wasn’t prepared, then I only have myself to blame. Having been a fan of her work for what seems like an age, I don’t mind admitting that I was disappointed with ‘Orange Monkey’, and as a result hadn’t quite got around to The Hope Six Demolition Project just yet. More fool me (I still maintain it’s not a great standalone single, but in the context of the rest of the material it definitely works). It’s a beautifully theatrical show, with the way a modern band works almost rethought. Harvey incorporates elements of a brass band into her own dazzling aesthetic, and she also incorporates another Harvey – Mick – on guitar (it’s a pleasure to see the former Bad Seed working within the parametres of a great band again). The stage show feels like the coming together of a grandiose production of A Midsummer Night’s Dream with the world’s finest Salvation Army band, if you can imagine that. Polly and co. play five spellbinding tracks from the new album, followed by three from the Mercury Prize winning Let England Shake, including a rapturous ‘The Words That Maketh Murder’ (the rest of the set is split between the new one and selected career triumphs). Finishing with ‘River Anacostia’, We Love Green is over for yet another year, with everyone hopefully learning from their mistakes. The curators will no doubt ensure the ticket machine fiasco never happens again, while I’ll be self-flagellating with The Hope Six Demolition Project as soundtrack until next Christmas.